Louis and Kathie Kroot of Lexington, Ky., had plans to retire soon. But Louis, a Navy physician, will be seeing more patients and fewer vacations during the next several years.

That's because Louis, 62, and Kathie, 59, signed a contract with Structured Investments for a lump sum of cash in exchange for Louis' military pension. Structured Investments, through its Retired Military Financial Services division, gave the Kroots nearly $92,000 — money needed, Kathie says, to pay off their daughter's medical expenses and a hefty tax bill created after withdrawing 401(k) funds. 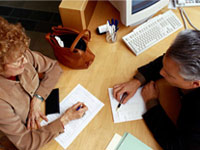 Failing to read a contract has one couple paying almost 30 percent in interest.

"We thought it was a good deal and it would get us out of an immediate problem right away," Kathie says. "But we didn't realize how much it really was."

The Kroots found out that the $92,000 they received in 2005 would be repaid at an interest rate of about 30 percent, which they learned after the Center for Public Integrity approached them about an investigation it was doing on Structured Investments.

"I admit we didn't read the contract," Kathie says. "No one put a gun to our head. But I know now that we could have taken a consolidation loan and already paid it off for less money than we're paying now."

In all, with insurance premiums that were built into the contract, the Kroots will pay more than $240,000 for the $92,000 they received, Kathie says. They are scheduled to pay off the amount in October 2013.

In a recent class action suit against Structured Investments, of which the Kroots were not a part, the company maintains that it was "buying a stream of income" and did not intend to have military benefits "assigned." But a California judge ruled against Structured Investments, saying the company violated federal law against "assigning" military pensions of enlisted service members to other parties without openly calling the transactions assignments.

Matoush adds that the Servicemembers Civil Relief Act offers some protection against unscrupulous lenders but acknowledges that the rules and laws can be complicated.

The Kroots, who are part of a class action suit still pending, say they will keep making their payments but advise other service members to be cautious.

"We're not starving by any stretch of the imagination," Kathie says. "We're OK, but other people may not be able to weather it. And besides, the contracts are illegal. I guess we don't want other people to be cheated."