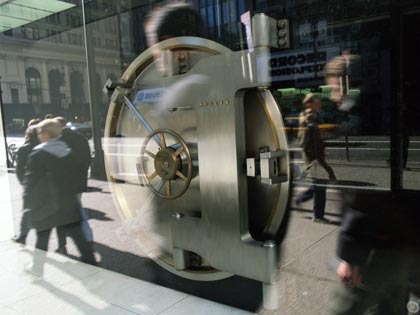 Before Alannah Kern and her husband, Alan, left for a vacation in July, she mailed a check to pay for a new health insurance policy that was to take effect in September. She figured the insurer wouldn't cash the check nearly two months before coverage was to begin.

"I sent them a postdated check 45 days early because we were going away and I was nervous," says Alannah Kern, 65, who lives outside Palm Springs, Calif. "I didn't want to take a chance and not be covered."

While the couple was visiting relatives in Canada for three weeks, the insurer deposited the check. That plunged the Kerns' account into negative territory. Their bank, Wells Fargo, covered the check and then slapped them with fees—$35 for the overdraft and a $5-a-day penalty until funds were deposited to replenish the account.

The Kerns, who monitor their account online, quickly contacted the bank, which agreed to reduce both fees.

Those charges incurred by the Kerns, and by others in similar situations, are proving to be a huge moneymaker for the nation's banks. According to a new report, banks and credit unions this year will collect a record $38.5 billion in overdraft and bounced-check fees.

Despite the recession, this revenue is nearly double the nearly $20 billion that banks collected in 2000, says Mike Moebs, chief executive at Moebs Services, an economic research group that conducted the study. Those fees are the largest revenue stream for nearly half the banks in the country.

Just under 10 percent of customers pay about 90 percent of those fees. What do they have in common? The lower their credit score, "the greater the tendency to incur overdraft fees," Moebs says.

The national median overdraft fee is $26 this year, the report says. Larger banks, such as Wells Fargo and Bank of America, charge a median of $35, according to the report.

"Banks are relying heavily on this overdraft income," says Moebs. "With interest rates so low, banks can no longer pay their employees with [revenue generated from] loans and investments. So what you’re seeing is a greater proliferation of fees."

Americans age 55 and older are not spared from these charges. They pay an annual $4.5 billion in overdraft fees, according to a study released last year by the Center for Responsible Lending (CRL), a nonpartisan research and policy group. As they do for younger folks, debit card purchases triggered most overdrafts for older people.

In one case, a woman who relied heavily on her Social Security income racked up $448 in overdraft fees over two months, says Rebecca Borne, policy counsel for the CRL. The CRL report also found that 80 percent of consumers surveyed would rather have their debit card transaction denied than have it covered by the bank in exchange for an overdraft fee.

"Banks engage in a variety of practices that deliberately maximize overdraft revenue," Borne says. "They will credit transactions in order from highest to lowest, regardless of the order they occurred, because that will deplete the account more quickly and allow every subsequent transaction to incur a fee once the balance has gone below zero." Also, she says, "they don't warn consumers at [ATM] terminals when a transaction will result in an overage."

Covering an overage "is not a high-risk loan for the bank, yet it's an outrageous cost. A fee should be reasonable and proportional to the cost to the institution of covering the amount," she says.

Other fees may be in store for account holders as banks seek to boost their bottom lines. Moebs predicts that free checking may become a memory. He says banks may also begin charging customers for deposits that later bounce, for balance inquiries to a call center and even for speaking with a bank employee on the phone.

"We've never seen fees increase in any recession until now," he says.