When Marine Capt. Jonathon Rowles was called to active duty in 2006, he never thought that his mortgage would be among his top worries.

But that's exactly what happened. Despite a federal law capping mortgage interest rates at 6 percent for most active duty members of the military, Rowles, 29, and his wife, Julia, say they were repeatedly overcharged by their lender, JPMorgan Chase, in the following years. 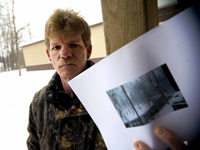 When the couple declined to pay more than they were legally obligated to under the Servicemembers Civil Relief Act, collections calls ensued, often coming multiple times during the day and at all hours of the night. The Rowles, who now live in Beaufort, S.C., were even threatened with foreclosure on their Colorado home.

"The collections department of Chase could find me any time of the day through numerous phone numbers — they called my mother, called me at work, at home, during dinner, while I was sleeping, while my children were sleeping," Jonathon Rowles said in an affidavit presented to the court. "No one was looking to help or fix it."

After years of unsuccessful dealings with the bank, Rowles filed a lawsuit seeking damages against Chase in 2010.

Now it appears that the Rowles are far from alone. Chase officials are acknowledging that they mishandled the interest rates or fees for mortgages belonging to more than 4,500 members of the military. In at least 18 cases, Chase mistakes led to foreclosures.

The problems were caused by everything from technical difficulties to human error and lack of training, says Kristin Lemkau, a Chase spokeswoman.

Since discovering the errors, Lemkau says, Chase is issuing more than $2 million in refunds and has come to a resolution with nearly all of the families who were wrongly foreclosed on. What's more, the bank now has a special unit to handle mortgages for members of the military and has reduced service members' interest rate to 4 percent.

"We deeply regret any difficulty this has caused the Rowles and anyone in the armed forces who experienced problems. There is no excuse," Lemkau said in a statement.

But apologies aren't good enough for the Rowles, says William Harvey, an attorney representing the couple.

"Chase says they've paid it all back, but that's like a bank robber saying, 'Oh, you caught me but I gave it all back so now it's OK,' " Harvey says. "That's just not the way it works, particularly with Jonathon and Julia Rowles, who have had harassing phone calls for two years."