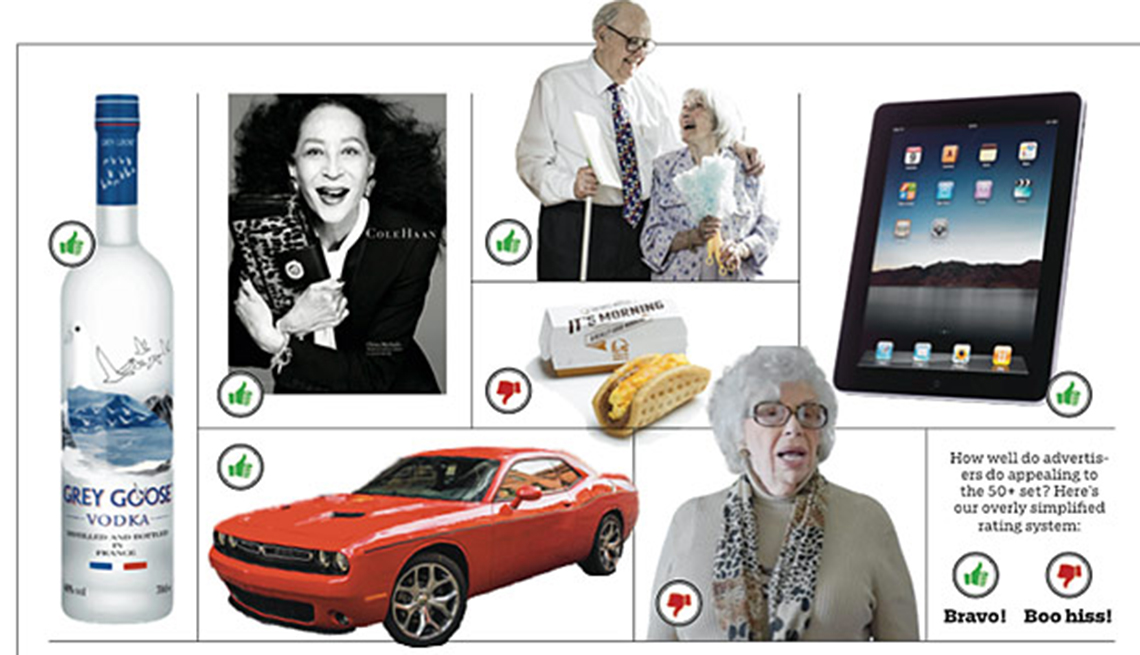 Some advertisers put their message where the money is, reaching the boomers; others still ignore and insult the 50+.

En español | A recent television commercial for Esurance introduces viewers to Beatrice, a gray-haired woman with oversized glasses and an unfashionable scarf who is identified as an "offline over-sharer." Beatrice brags to two friends that she saves 15 percent in 15 minutes on her car insurance — as well as "a ton of time" posting her vacation photos on her "wall" rather than mailing them. She actually has taped snapshots all over her living room wall.

When one friend counters that she saves more than that in half that time (presumably from Esurance), Beatrice is miffed. "I unfriend you," she blurts out.

"That's not how this works. That's not how any of this works," groans her friend, before the narrator introduces Esurance and the company's slogan: "Welcome to the modern world."

Get it? Though 28 million people over 55 already subscribe to Facebook and boomers buy twice as much online as younger adults, according to Forrester Research, cranky, befuddled Beatrice can't fathom social media.

Responding to complaints about the spot, Ellen Hall, a blogger for Esurance (which vows in its mission statement to make "people's lives a little better — by valuing our customers"), wrote in a post that the ad's intent "is to show that it can be difficult to keep pace with technology these days (no matter your age)."

But the company's underlying message is that your elders are idiots, so buy our product to be cool and not like them. The campaign amounts to a self-inflicted wound, given that consumers over 50 buy nearly five times as many new cars (which require insurance) than does the prized 18-to-34 demographic.

Chuck Schroeder, 71, founder of Senior Creative People, a consulting firm that specializes in communicating with mature consumers, worries that many advertisers depict older adults as decrepit Luddites "still looking at their VCR flashing '12,' on and off."

As an example, he cites Taco Bell's new spokes-codgers, Harold and Lenny, who evoke Statler and Waldorf, the grumpy Muppets in the theater balcony.

"Today they're eating Waffle Tacos, tomorrow they're loitering," warns Taco Bell's schlubby pitchman. Of course, he sits on a park bench and wears a hearing aid. Meanwhile, attractive millennials eat "next-generation" breakfast sandwiches nearby. Restaurant industry analyst Technomic Inc. estimates that nearly 1 out of 5 of the fast food chain's regular customers are 55 and older, but never mind them.

Brainwashed by the culture

Taco Bell and Esurance are outliers; far more advertisers commit sins of omission, ignoring the 50-plus demographic. "Older people are kind of written off by advertisers, as if these people are not important [and] don't buy anything," says Dilip V. Jeste, associate dean for healthy aging and senior care at the University of California, San Diego. "It's unfortunate that older people themselves buy into it."

The 50-plus market that many advertisers ignore or insult is not big: It is enormous. According to a Nielsen study, by 2017 boomers will control 70 percent of the country's disposable income. From 2007 to 2010 — tough economic times — retirees were one of the few demographic groups to experience stable or rising incomes. Nearly 60 percent of homeowners over 65 are not weighed down by mortgages, compared with just 11 percent of 35- to 44-year-olds. And boomers account for 80 percent of America's luxury travel spending.

While boomers and the "greatest generation" watch more live television than younger viewers, many older adults unsurprisingly tune out ads; more than half of older adults surveyed by the advertising firm GlynnDevins do not believe ads portray them as "people to be respected."

Call it the Ponce de León Effect — the obsessive search for a fountain of youthful consumers. Bitter, who characterized the lack of respect for older buyers as "bizarre," recently advised a major company in the packaged-goods industry. The company had copious data proving that its customer base is between 47 and 70. Nevertheless, Bitter's client worried that targeting that market would make its brand look old. "We are a youth- and beauty-focused culture," Bitter says. "We sort of culturally brainwash ourselves."

Nearly two-thirds of companies, according to a 2005 survey, "had no specific plans for targeting boomers or 50-plus consumers in their product development, marketing or advertising."

Aside from entrenched societal ageism, reasons for this include outdated assumptions that older consumers are cheap and so brand-loyal that they are immune to advertising. And many agencies have no place for older creative talents.

In 2012, Ad Age asked Nancee Martin, director of talent for TBWA Worldwide, to assess job opportunities for older copywriters. She was dismissive. "There's a commonly held conception that to be a creative, you need to know what's hot, what music is cool, what website is all the rage — and [with age] you become less aware of those things."

The Bureau of Labor Statistics reports that the median age of advertising employees is 39.3 — about three years younger than all workers. But many creatives at big ad agencies feel career prospects waning by their mid-30s.

Rob Baiocco, 50, cofounder of the Baiocco and Maldari Connection, recalls working on the coveted Captain Morgan rum account in his 30s while an executive creative director at Grey Advertising, but "then I got a little bit older. Some of the people that were looking at the brand probably thought, 'You know, let's get some younger guys.' " Baiocco sensed pressure and resigned the account. Big agencies, he says, often force out aging creatives or assign them "less sexy" accounts like pharmaceuticals.

Agencies often associate success with award-winning spots that sway young people, says Bob Hoffman, author of 101 Contrarian Ideas About Advertising. "Nobody in the advertising business and very few people in the marketing business ever built a career on successfully talking to 60-year-olds."

Despite the youth worship at many ad agencies, Ken Dychtwald, CEO of the consulting firm Age Wave, believes many marketers live in the past. Lifetime brand loyalty "was once a reality, but now it's just a myth," he says. Previous generations often selected a brand between the ages of 15 and 25 and never switched. That became the target age for advertisers.

But that has changed. A study in 2007 found that 70 percent of boomers would change home appliance brands and slightly more would switch clothing preferences. Brent Bouchez, 56, cofounder of the ad agency Bouchez Page, calls boomers "brand-promiscuous."

Nielsen's study, a collaboration with the ad agency BoomAgers, debunks the myth that older people are tightwads. Boomers, it says, "were born into a post-war culture of affluence and optimism." With no firsthand experience of the Great Depression, boomers have always spent freely and are not stopping now. "Boomers make the most money and spend what they make," concludes the study. 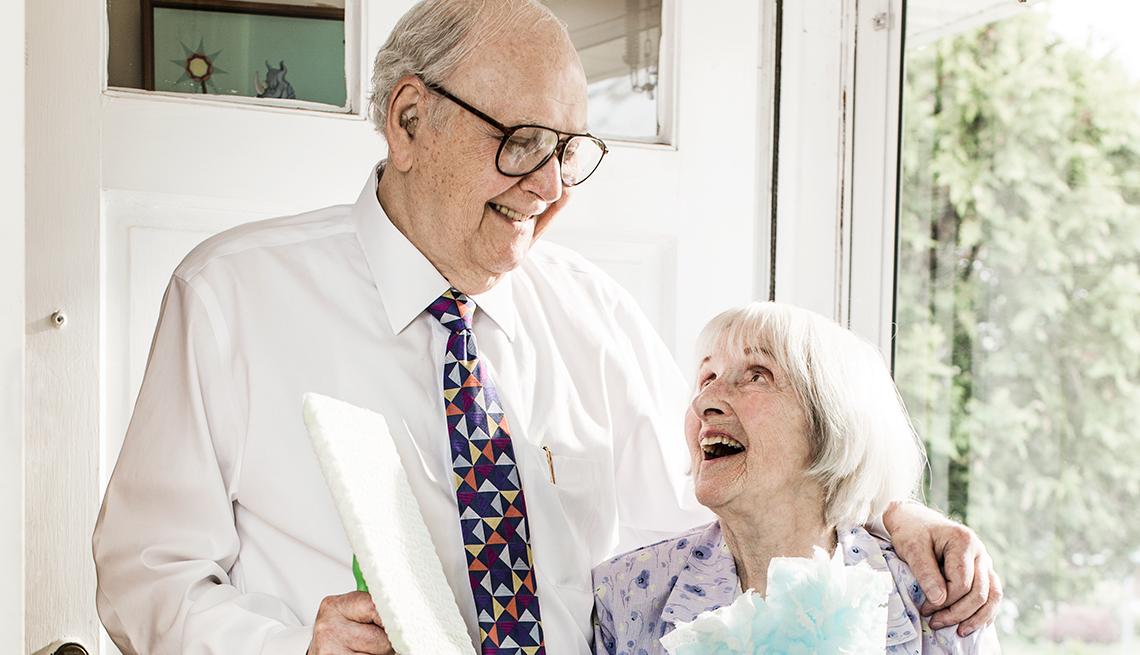 A recent Swiffer ad campaign is evidence that older consumers may be starting to get the respect they deserve.

A tale of two vodkas

Some innovative companies, including Apple, understand that. Boomers account for 41 percent of people who buy Apple computers, notes Nielsen, and commercials for the iPad reflect this. Its campaign stars the device and a diverse supporting cast using it. "There was a baby and there was a 70-year-old man," says Lori Bitter, pointing out an admirable strategy that "doesn't disown anyone." The message "is timeless and ageless."

Older adults might want to be youthful, "but they don't want to be like young people," Bob Hoffman says. "People over 50 have their own idea about what being youthful is — and it's not like being Miley Cyrus or Justin Bieber."

Brent Bouchez concurs. He offers two liquor ads as neat examples of strategies that attract or repel the more than 1 of 4 vodka drinkers over 55. Ketel One's "Tonight" ad shows attractive twentysomethings at a party — plenty of carousing and bro hugs set to a rocking soundtrack. "Beautiful ad," he allows. But older viewers, he bets, "don't want to go to that party."

Grey Goose, on the other hand, invited a broader range of consumers to its 60-second party. Its "Discerning Taste: Oysters" commercial is set on a sailboat. Close-ups show hedonistic vignettes — legs intertwined, massages, the cracking of lobster, the clinking of icy glasses. "You get glimpses of people; I can't tell you how old they are," Bouchez says. "The 50-year-old [viewer] goes, 'Man, that's my life now,' and the 25-year-old often says, 'OK, that may not be my life, but I want to get there.' You can target older and bring younger along. Whereas, if you target younger, you probably won't bring older along."

Several recent campaigns actually venerate aging. To celebrate Cole Haan's birthday last year, the shoe company commissioned glamorous portraits featuring icons born in 1928, when the company was founded. Dodge followed suit to mark its 100th year in business, with an online commercial that offers snippets of unconventional wisdom from centenarians. The ad uses the tagline, "You learn a lot in 100 years."

Chuck Schroeder of Senior Creative People praises the popular "Swiffer Effect" campaign, which follows a couple in their 90s, Lee and Morty Kaufman, as they clean their tidy Valley Stream, N.Y., house. The advertisers, says Schroeder, "are not making fun of Morty and his wife; they're living with Morty and his wife." A spokeswoman for Swiffer, Elizabeth Ming, says the ad resonates with Americans of all ages because many consumers "aspire" to have a similar loving, enduring relationship. Schroeder sees the Swiffer ad campaign as evidence that older consumers may be starting to get the respect they deserve. He predicts more companies will decide that "they have to sell stuff to the people who have the money to buy — and that is going to be the major overhaul in what we see."

David Wallis is a freelance writer based in New York.