We're not idiots. We know we're supposed to manage our money better. So why don't we? 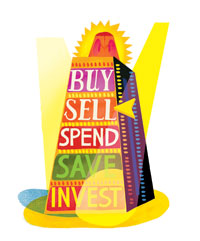 How sharp are your financial wits?

The biggest reason may be our money instincts: They aren't particularly good. The fact is, people tend to choose immediate gratification over larger long-term payoffs ( like, say, a comfortable retirement), and we rationalize our behavior by telling ourselves we'll do better tomorrow. In a recent University of Michigan study of the Chilean retirement system, which has relied on 401(k) – like plans since the early 1980s, researchers found that investors' impatience is a major impediment to saving. "We all have self-control issues," says economist Richard Thaler, who directs the Center for Decision Research at the University of Chicago. "Our thought process often goes something like, 'I'd like to save more, but I'd like that big new TV even more.' Then we realize that football season is starting next week, and the idea of saving goes right out the window."

You may think you're more rational than that — and maybe you are. Let's find out. The following three questions are typical of the ones used by behavioral economists to demonstrate how and why we make financial decisions that go against our own interests.

A salesperson is touting new windows to a homeowner. Which pitch is more likely to get a sale?

"Replacing the windows will save you money."

"You're losing money by not replacing the windows."

The two pitches mean the same thing, but the second is more effective. Why? People fear immediate losses more than they desire future gains. Behavioral economists call this "loss aversion"; they've documented we feel the pain of losing about twice as strongly as we feel the pleasure of winning.

The instinct to flee from losses probably served us well back when saber-toothed tigers presented a more pressing threat than plummeting stocks. Today, however, loss aversion can be less helpful. "The same instincts that prompt you to flee a burning building make you want to sell when the market's low and buy when the market's high," says Elle Kaplan, founder of Lexion Capital Management, a New York City wealth-management firm. "But that's the opposite of what you need to do to build and preserve wealth."

To counter the effects of loss aversion, avoid checking the balance on your investment accounts more than a few times a year, which should help you avoid the temptation to move your money in and out as the market gyrates. And if you can't trust yourself to keep your instincts in check, consider working with a financial adviser.

Next: The danger of overconfidence. >>

This question, from the behavioral-economics book Why Smart People Make Big Money Mistakes (1999) by Gary Belsky and Thomas Gilovich, is really a trick: Kentucky's capital isn't Louisville; it's Frankfort. While you were congratulating yourself for knowing the s in Louisville is silent, you probably didn't stop to wonder if that was all you needed to answer the question — a display of the human tendency toward overconfidence.

Excess confidence leads people to think too highly of their own skills — even in areas in which they aren't very skilled. Eric Dahm, an investment adviser at Human Investing in Portland, Oregon, sees this in clients who hold a lot of retirement savings in their employer's stock. "When we point out the danger of having a large portion of assets tied up in one stock, they'll often respond, 'I work here, I see what they're doing, and I think this stock is going up forever,'" Dahm says. "I watched one client do that — and he rode the stock from $60 a share all the way down to $3."

One way to combat overconfidence is by avoiding the temptation to use your stock-picking skills to invest in individual companies. Instead, select a handful of highly rated mutual funds — no more than half a dozen — that invest in diverse companies in different parts of the world.

In a 1999 study published in the Journal of Behavioral Decision Making, researchers found that 56 percent chose the popcorn flick for tonight and 44 percent went for the more intellectual option. But wait: Move the date forward by a couple of weeks and 71 percent picked the art film. Blame "hyperbolic discounting," which is a wonky way of saying that we prefer immediate rewards and postpone things we think will be good for us.

This sort of choice pits two different decision-making processes in the brain against each other. One side — Thaler calls it Mr. Spock — is extremely rational and deliberate; the other — Homer Simpson — is impulsive and emotional. And when the two of them fight, Homer tends to win: It can be hard for your Spock side to save for retirement when your inner Homer is drooling over big-screen TVs and other expensive distractions. The solution? Eliminate Homer by automating your savings. Your 401(k) plan does this brilliantly, spiriting your money away before you see it. Do the same with your IRA or emergency fund by setting up automatic transfers from your bank account. "Automatic savings plans are incredibly powerful, because they keep the part of your brain that's interested only in immediate rewards from participating in the decision," says Russell James, an associate professor in the department of personal financial planning at Texas Tech University. "That's a great way to get yourself to set aside more money for your retirement."

Michaela Cavallaro writes about personal finance and works on her self-control issues in South Portland, Maine.

You may also like: Live for today, save for tomorrow.