En español | While most people look forward to the holidays as times of joy and gift exchanging, consumer advocates like myself become concerned about what happens after the packages are unwrapped.

See also: The 7 things you should always say to customer service.

How successful will you be with the attempted exchanges, returns and refunds? You see, sometime between Santa's chimney excursion and the final whistle of the holiday football games, Christmas cheer can evolve into gift-return panic. So that you can get what you wish for after the big day — Christmas, Hanukkah, Kwanzaa or Solstice — here's my nine-point plan for successful holiday gift returns.

1.    E-Gifting with Love — One of the biggest changes in gift giving in the last few years has been the ability to send someone an e-gift: an e-book, downloadable music or game. If you've received one of these items, think before you download, open, use or install — because once you've activated or accessed the gift, it's yours to keep. Therefore, after you've smiled and thank you'd — do nothing. Later on, go to the website's customer service page for instructions on how to exchange the gift for something that better suits your taste. If they don't have anything you would want for yourself, you can likely get an online credit for the purchase of a future gift for someone else. 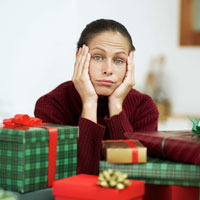 Remember to put the gift receipt in the box before you wrap it.

2.    Keep the Receipts and the Box — If your gift giver was thoughtful enough to include a gift receipt, file it away in an envelope labeled "Gift Receipts" with the date. Save the bag or box too — surprisingly, sometimes the receipt may not be enough and a store bag helps make the case that Aunt Flo really did buy it at their store. I know it sounds a bit much, but come next summer when that new camera simply won't snap, you'll be better prepared to make your case to the refund rep. (NOTE: When you give a gift, be kind to the recipients by including gift receipts.)

3.    Get the Awful Ancestry — OK, so your relatives aren't organized enough to include gift receipts. (Sounds like you're part of my family.) There's still hope for ensuring a refund for an unwanted gift, but you're going to have to do a little acting. When there's not a gift receipt in the box, practice this line: "It's beautiful, where did you get it?" (Even if it isn't.) Later, when everyone else is sagging on the sofa watching bowl games, get on the Internet, research the item and sale price. Print out the page and store it with the gift receipts. While not as good as a gift receipt in guaranteeing a refund, this ad hoc documentation can be a great help in securing a store credit.

Next: Avoid the morning after, then "sell" the return. >>

4.    Avoid the Morning After — On Dec. 26, lines will be long, tempers short and return policies tight. The best day for returning gifts and shopping for replacements will be two days later. By then, the lines will be short and store staff will be in a much better mood. On the other hand, if you absolutely love waiting hours in line and dealing with the most irritable and impatient customer service agents, be sure to head to the stores a few hours after the doors open. I guarantee you'll get your fill of stressed out store clerks and snarky sales people.

5.    "Sell" the Return — Believe it or not, some people try to get bogus refunds for used toys and tired clothing during the harried post-holidays. Retailers are on the lookout for such scams-in-reverse. Whether your return is accepted or not is often a store clerk's snap judgment. You can increase your chances if you "sell" the return. (This is where that previously saved store box or bag comes in really handy.) Make sure the gift-to-be-returned looks nice and new. This will greatly increase your chances of getting a positive response to your refund request.

6.    Loyalty Counts — Merchants are more likely to give you a refund if they know that you are a one of their regular customers and their positive response could be rewarded with future business. When you get to the head of the return line, make sure to stress that you are a regular customer and will continue to be if they treat you well. Say something like, "We shop here all the time and know how well you treat your customers, compared to the other guys." Be sure not to approach it from the negative by mentioning the possibility that they'll lose your business if you don't get your way. They can figure that out on their own. Don't forget to smile. If you're the one pleasant person among a dozen less-than-civil customers, you'll likely get the best treatment.

Next: One advantage of buying with a credit card. >>

7.    The Credit Card Exception — Most credit card merchant agreements require refunds within 30 days if you have a store receipt. A merchant's "all sales are final" sign likely doesn't count if the gift was paid for with a credit card. Still, don't play lawyer, play nice. Just remind the retailer of their obligation as a credit card merchant and point out it would be much simpler for them to just make the refund than for you to file a challenge with your credit card company. Your goal is to convince the merchant that it may be much easier and less time consuming for her to just give you a store credit than to hassle the problem with their merchant bank. (NOTE: To sweeten the deal, you can also remind her that you are likely to end up spending more than the credit anyway.)

8.    Meet Them in the Middle — You want your money back. The merchant wants to keep the sale. On the surface, it's an irreconcilable situation. A store credit may be an acceptable compromise for both of you. While it might not be as rewarding as cold hard cash, you might be able to get some real value out of that paisley necktie.

9.     Stand Your Ground — While I was writing my book, Unscrewed: The Consumer's Guide to Getting What You Paid For, a gray-haired spitfire of a woman told me a holiday return horror story. The woman had received a sweater as a holiday gift, but it had a split seam. The sweater had been purchased at a major department store and even included the store label in the collar. However, a few days after Christmas, when the woman tried to return the item without a receipt, the customer service agent asked for proof it had been purchased at their store. "It's got your label," said the woman. "We still need a receipt," said the clerk. "That's our policy." The woman replied with the best consumer response I've ever heard, "Your internal policy decisions have nothing to do with my customer service expectations." She politely held her ground. Eventually the store manager showed up and she was given a refund. When they say, "That's our policy," don't walk away. That phrase is often waved around like a magic wand to make customers disappear. Play nice; just don't play by their rules. Don't leave. Keep your cool and keep asking for the "boss." You might be surprised how quickly they change their tune.

My final tip is a reminder that, for the most part, the people you'll be dealing with didn't make the policies. There's no benefit in getting mad at them or treating them disrespectfully. In fact, while getting angry might make you feel better, it is likely to decrease your chances of a successful refund or return.

Have a complaint about customer service? Write to Ron.

This story was last updated October 2011.