The gloomy economic climate has prompted jittery Americans to spend less and save more, according to an AARP Bulletin poll.

Three-quarters of the nation's adults (76 percent) age 25 and older polled have adopted thrifty habits in the past year, according to the survey. For half the adults, the move to conserve funds resulted from a drop in household income in the past 12 months. More than a third (36 percent) said fear that they or their spouse might lose a job in the next year prompted their thrift. Among respondents age 50 and over, 26 percent cut back on spending for that reason. Nearly one in three (29 percent) says a spouse had actually lost a job in that time period, compared with 18 percent of those 50-plus who had lost jobs.

While the jobs landscape appears grim now, the situation was worse in spring 2009 when the nation was still in the midst of a recession that didn't end until that June. Of adults age 25 and over polled that year in a similar Bulletin survey, nearly one in two (48 percent) was worried about a possible job loss.

Since then, economic growth has moved in fits and starts. So it's no wonder that in the latest poll, three-quarters (76 percent) of adults age 25-plus say they or their spouse had curbed spending and boosted saving over the last 12 months. And 86 percent say they primarily wanted to have more money available for emergencies. More than two in three (72 percent) decided to boost their retirement savings. 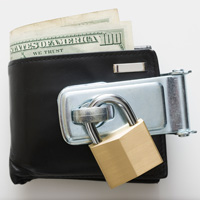 Three out of four respondents said they or their spouse had cut back on spending.

In the 2009 poll, slightly more (79 percent) said they had increased saving and decreased spending. Only 51 percent said they were saving for retirement, compared with 57 percent in the 2011 survey.

Discretionary spending took a hit in many budget-conscious households, according to those polled. Asked how they have cut their debt in the last six months, 75 percent said they stopped dining out as much, made fewer purchases and didn't travel as much. When they did buy merchandise or services, 73 percent paid with cash or debit cards instead of credit cards. More than half (57 percent) shelled out more than the minimum balance on their credit card bill each month, and 23 percent negotiated better terms with lenders or other creditors.

Catherine Hurst, a 66-year-old retiree living on a fixed income in Providence, R.I., says she was among those who have cut back on travel to save money.

"During the past two years, we didn't get a Social Security cost-of-living adjustment but everything I spent money on went up, like food and gas. I laid off from travel. When I retired, I thought I'd have enough money for nice trips, and I don't," she says. "It's not so much a dramatic shift as a continued chipping away at the way I allocate my money. I continue to have to shave the discretionary spending because of the amount I have to spend for utilities, taxes; everything continues to get more expensive."

The 2011 survey asked what type of loans people held, and more than four in 10 (42 percent) had a mortgage. About one in three had a car loan (36 percent) or a credit card balance (32 percent), and about one in five (21 percent) held a student loan. More than one in 10 (12 percent) owed money to other people.