Meagan and Mike Farrell planned to spend the last Saturday in August celebrating their daughter Lindsay's 10th birthday. Instead, the Monroe, Wash., couple got a shock.

After years of banking at Chase, a letter from the company informed the Farrells that their checking and savings accounts would be closed in 10 days. The couple, who say they have excellent credit and have never bounced a check, immediately called Chase.

See also: Bank takes over home without a cause. 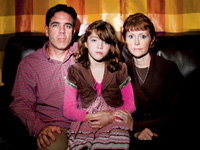 The Farrell family's bank accounts were frozen for no reason and with 10 days warning by Chase bank.

"All we could think was that this absolutely had to be some kind of mix-up," says Meagan Farrell, 42.

But after talking to at least eight bank employees that day, no one could offer any explanation, the Farrells say.

Worse yet, by the time the couple arrived at their local branch Monday morning, their checking and savings accounts were frozen and they learned that several outstanding checks would bounce even though they had sufficient funds.

Chase acknowledged "confusing communications" with the Farrells and eventually reopened their accounts, but only after the involvement of local media and federal regulators. A formal written apology and statement were issued by the bank after more than a month.

"At [Ms. Farrell's] request, we've reviewed her account, reopened it and will reimburse her for any fees she incurred," Chase said in a statement.

Meanwhile, the Farrells have moved their money to a credit union and are gun-shy about banks.

Also of interest: Is your money market fund at risk? >>