If you're going to sell your cellphone or laptop computer when you upgrade, sell it fast. Don't stick it in a drawer and forget.

Technology is changing so quickly that the market for secondhand devices can be breathtakingly short. You've got to move right away to avoid a lower price from Gazelle.com, NextWorth or other websites that buy secondhand electronics. Some devices get deeply discounted after just a few weeks on the market. 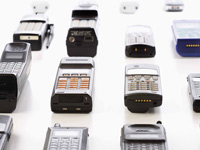 The earlier you sell an old cellphone, the more cash you're likely to get for it.

Two years ago, netbooks — the small laptop computers — were as popular as Blu-ray players were before video streaming came along, says Anthony Scarsella, chief gadget officer at Gazelle.com.

But now netbooks are fast being replaced by tablet computers. Tablets can also do the job of portable video game consoles, such as the Nintendo 3DS or PSP devices.

"The earlier you sell it, obviously, the more you're going to get for it," Scarsella says of a portable game console.

Aaron Crowe is a freelance journalist who specializes in personal finance.