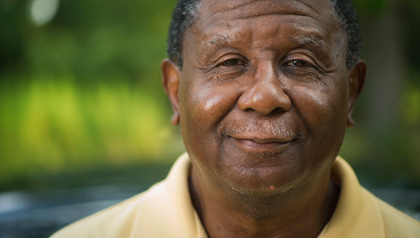 AARP Georgia hopes to help Arthur Fred Harper, of Atlanta, and 6,000 other people to upgrade their financial literacy, either through online tools or in-person workshops with a certified public accountant.

See also: 10 steps to get you ready for retirement.

Arthur Fred Harper, 68, of Atlanta, is exactly the kind of person AARP hopes to help. He lost a full-time job last year and now works part time driving cars to auction lots. His wife is retired.

In a recent AARP survey (PDF), two out of three Georgians 50 and older said they were worried about saving for the future. Harper is among those who are worried. "My money can only go so far," he said.

Rosie Cecil, 57, founder of DoMaRo Uniform Services in Decatur, is also concerned about her financial future.

"With the economy always being unpredictable, as I get closer to retirement age, there naturally are some concerns," said Cecil, whose husband is retired. "A natural process of aging is wanting to make sure there is some security. After the past three or four years, security is not something anyone can count on."

AARP Georgia is encouraging older people to explore tools on the association's website designed to help them decide when — and whether — retirement is financially feasible.

One tool is a retirement calculator that weighs salary, marital status, age, savings, Social Security projections and the desired level of future lifestyle spending. It helps determine whether the person using the calculator is on track to retire as anticipated.

Another tool links to a 401(k) savings calculator. The participant inputs an amount being contributed, along with current age and targeted retirement age, for an estimate on how much money will accumulate within the time frame.

A third tool helps determine the level of Social Security payments based on the participant's earnings and retirement age.

In addition to the online tools, AARP Georgia plans to launch a series of Financial Freedom workshops this fall aimed primarily at the African American and Hispanic communities. The workshops, conducted by a certified public accountant, will offer information on setting a financial course through savings and investments.

Tobias Tillmon, AARP Georgia associate director for multicultural outreach, said he is working with some of Atlanta's African American churches to serve as venues. He is also working with Alpha Phi Alpha, the nation's oldest black fraternity. The Alphas have more than 175,000 members nationwide and a significant membership in Georgia.

AARP Georgia was an exhibitor at the Economic Empowerment Conference in mid-July at the predominantly black Word of Faith Family Worship Cathedral in Austell.

Next: Need for fiscal responsibility. >>

The Rev. Courtney Wright, an associate minister of the church and a financial adviser, took a special interest in the conference.

The conference grew out of discussions "about what we can do to impact the legacy that [people] leave on this earth — specifically, from a financial standpoint," Wright said.

Alluding to the fragile economic recovery and a spotty record among Americans for saving, she added, "We must be more fiscally responsible than ever. We don't know which way things will turn."

Tillmon said he hoped AARP Georgia's involvement with the conference would serve as a springboard for the Financial Freedom program.

AARP's goal is to involve 6,000 African American or Hispanic Georgians this year in upgrading their financial literacy, either through the website tools or workshops.

"With the sheer magnitude of how many people we want to reach, I knew we'd have to reach our members in a different way," he said, referring to the collaborative efforts with the churches and fraternity.

Also of interest: An investment plan that pays the bills. >>

Michael Tierney is a freelance writer based in Decatur, Ga.