En español  |  Your phone number may be listed among the nearly 210 million on the National Do Not Call Registry — but you're still getting calls anyway, perhaps even more than before.

Although the number of unwanted calls dropped after the DNC registry was established in 2003, they're on the way back up again. So are complaints, averaging 190,000 per month, according to the latest report (pdf) from the Federal Trade Commission, which jointly runs the registry with the Federal Communications Commission.

One reason you may be getting those pesky interruptions may be that certain kinds of people are still permitted to call, even if your number is listed on the registry. Here are 15 things you should know:

1. Unsolicited calls from charities, opinion survey firms and political organizations are exempt from the do-not-call rules. Also allowed, at least until you say otherwise, are calls from debt collectors and from for-profit companies (as well as any telemarketing firms they hire) with which you've had a previous business relationship.

Ask these callers for the names of the actual company for which they work, such as DialAmerica. Then ask to be removed from that company's calling list as well as the charity's list. 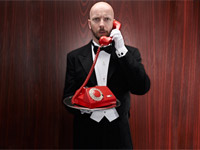 To stop unwanted calls, consider listing your phone number under a pseudonym.

3. Charities aren't legally required to honor your request to stop calling, but many will. Why waste time on someone who's refused to donate?

4. Callers who identify themselves as opinion surveyors are often really trying to get your name and personal details to sell to others. They usually start with seemingly innocent questions about your feelings about the economy or politics, then ask how many credit cards you have, the balance on them, etc. Or, after a few questions, you may be told you qualify for lower-rate credit cards or that you won a prize for your answers.

Hang up. These kinds of calls violate DNC rules.

5. Even if you're on the registry, a telemarketer or seller may call you within 18 months of your last purchase, delivery or payment. But regardless of past or future business, once you ask to not be called again, that company cannot legally do so.

6. Debt collectors can call you — but not before 8 a.m., after 9 p.m. or anytime after you tell them to stop. Such requests should be sent to the agency in writing (return receipt requested). Once they get this letter, collectors can only call to tell you there will be no future contact or let you know the creditor is taking action, such as a lawsuit. For more information on debt collector calls, visit this FTC webpage.

7. Never confirm your name to unknown callers. "Is this [your name]?" They'll often open with that, but you should answer by asking why they're calling and whether it's a sales call. You don't want to confirm your identity, as that will probably just generate future calls.

8. If there's just silence at the other end when you pick up the phone, it's probably an automated call from a robodialer. These systems generally have two seconds — usually after you say "hello" — to connect you to a live person at a call center anywhere in the world.

9. Some automated calls ask you to press "1." Do that and you're routed to a live person in a call center. Your name may then appear on a computer screen, enabling the person on the other end to seem to know you for a personalized pitch.

10. Consider listing your phone number under a pseudonym. Your phone service billing information must be accurate, but your directory listing can be under another name. This way, you can avoid paying for an unlisted number and when callers address you by the fake name, you'll know they got your name from the directory and have no legitimate reason to call you.

What is the craziest or most annoying unwanted phone call you've received?  Let us know in a discussion in our message boards.

11. Don't trust Caller ID. Readily available technology allows phoning fraudsters to put fake numbers and names on your Caller ID screen when they call. The latest twist: local numbers to better convince you they're calling from a nearby bank, often to solicit account information to solve supposed problems.

And by the way, even when not tampered with, Caller ID gives no clues to whether a call is dialed directly or made by a robodialer.

12. Ask your phone company about blocking services. These will prevent calls from unknown phone numbers from reaching you. The Privacy Rights Clearinghouse has information about this tactic and others.

13. Visit KillTheCalls.com for free "how-to-sue" instructions if you're on the DNC list but are pestered by telemarketing violators. Often, if you threaten to sue, and mention that fines run up to $16,000 per occurrence, "that is enough to stop telemarketers from calling you again," says Andre-Tascha Lamme, who started the website after successfully suing scores of telemarketers in small claims court.

14. File a complaint at the DNC website. It will enter a database that's used by the FTC and other agencies, including state attorney general offices. Complaints can be searched by keyword, area code, phone number, state and other criteria to build cases against violators.

Last year, more than 2 million complaints were filed at the DNC website. Since the registry was started nine years ago, 85 actions have been taken against 239 companies and 190 individual defendants, resulting in $69 million in civil penalties. Of that, nearly $23 million was returned to consumers on the receiving end of rule-breaking phone calls.

15. Don't count on the feds taking up your case. Legal action typically happens only against the biggest, baddest violators. "We look for targets where we can do the most good, going after those who make millions or billions of calls," says Maxson.

But know that your complaint may help build a case down the road against one of those big-time scofflaws.

Also of interest: A primer on the Do Not Call list. »