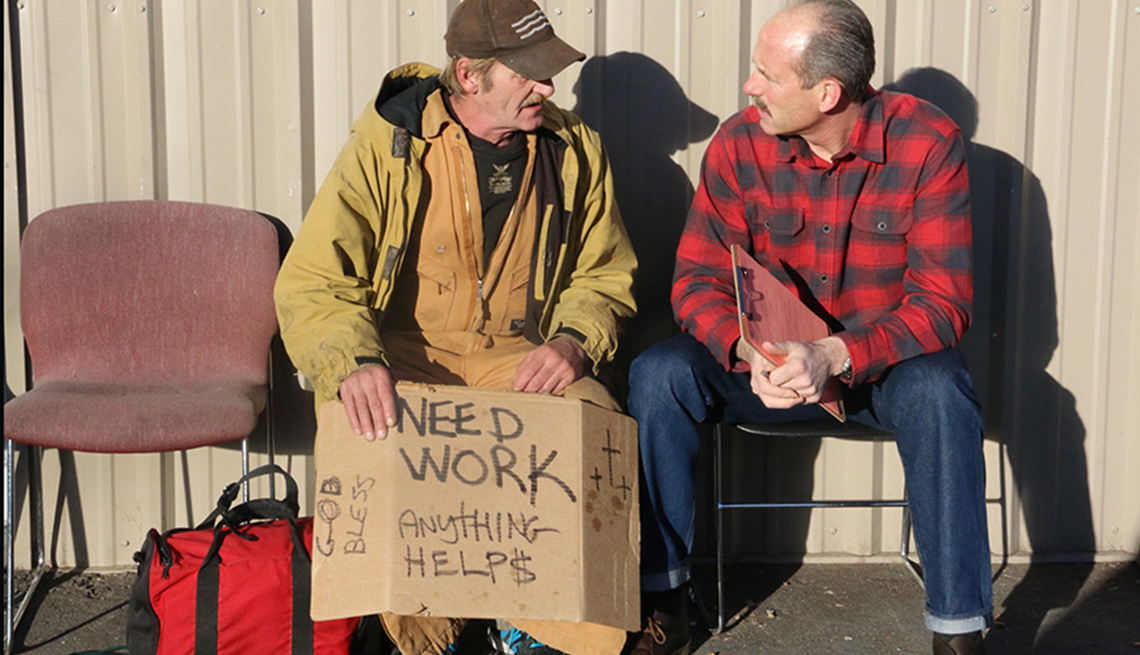 Photo courtesy Office of the Mayor, City of Albuquerque

Mayor Richard Berry speaks with a man as part of the 2017 point-in-time count to assess how many sheltered and unsheltered homeless people live in Albuquerque. Results from the study are reported to the U.S. Department of Housing and Urban Development.

"The community I serve has seen fit to step up and tackle some of the most difficult issues that we've faced for generations in America and we're making a big difference. We're really shining as a city that's compassionate. We have some programs that are the best in the nation for addressing homelessness."

According to the U.S. Department of Housing and Urban Development, homelessness among veterans in Albuquerque has reached the level of "functional zero" (which is a housing measure for, essentially, having fewer homeless people living on the streets than in some form of housing). According to the U.S. Conference of Mayors, unsheltered homelessness in Albuquerque dropped by 80 percent between the years 2009 and 2016.

Among the reasons for this accomplishment is There's a Better Way, a work program Albuquerque Mayor Richard J. Berry launched in 2015 after seeing a man holding a sign that read, "Want a Job. Anything Helps."

"We're trying to give people a better option than standing on a street corner panhandling," he explains. "So now we actually go out with a van and offer to hire them to do day work."

The participants are paid $9 an hour, which is slightly higher than the city's $8.80 minimum wage, and are provided lunch and overnight shelter if needed. "We've cleaned up more than 400 city blocks and picked up more than 120,000 pounds of weeds and trash, so our beautiful city looks even better," says Berry.

Another program of note is the Heading Home Project, which has been able to house more than 650 chronically homeless individuals since 2011, the year Berry founded the work. By housing the chronically homeless, Albuquerque is saving money — $5 million by early 2017 — because when people have housing they are off the streets and out of the crisis situations that require more extensive, and costly, city services.

News of Albuquerque's success has inspired cities including Chicago, Seattle, Denver and Dallas to adopt the day-work program. Berry has fielded interest from officials in Calgary, Canada, and Melbourne, Australia, too.

Prior to serving as mayor of New Mexico's largest city (population: 560,000, about 20 percent of whom are age 60 or older), Berry was elected twice as a representative to the New Mexico State Legislature. Before that, he owned an Albuquerque-based construction company. Berry's second term as mayor ends on December 1, 2017, and he's not seeking reelection.

1. Creating programs to make Albuquerque a more livable and age-friendly community began early in your administration and seemed to be a priority. Was this by design or something that grew out of other areas?

We also created ABQ Together, which is our dialogue about the city's future. We‘ve brought leaders together — from business, nonprofits, academia, houses of worship, the media, as well as institutional and government sectors — to create a new age friendly blueprint for Albuquerque.

2. What does a livable community look like to you?

First of all, a livable community is a community for everyone — meaning people of all ages can participate in what's going on. They can live here, they can work here, they can be active and well, and that there are resources, places and infrastructure that allows them to do that.

We want to make sure we're concentrating on the human element and providing our citizens with the support they need. We want a community without barriers, as much as that's possible. One barrier, for example, is transportation. Transportation in general is just important. Infrastructure in general is important. Bridges and highways need to work.

Right now we are installing what will be the best-of-its-kind public transit system in America — the Albuquerque Rapid Transit (ART) line. We're making it so people can get where they need to go by using public transit. We’re incorporating accessibility into service routes and transportation stops. There are really several reasons why ART is so important.

No. 1: It’s an economic driver. Independent studies show we could add upwards of $2 billion worth of new investments up and down the corridor. We can already document $300 million since we started construction.

No. 2: It’s a mobility issue and if you’re a two-income couple and both of you work, and one of you can take public transportation, well, that’s like a $9,000 raise for your family, since that's about what it costs to own and maintain a vehicle and drive it each year.

Having a rapid transit line creates what Albuquerque doesn’t have much of right now, which we’d like more of, and that’s an urban corridor. We have an urban core but we don’t have an urban corridor.  We’ve already changed the zoning to allow for more density, so if someone wants to live along the transit line and not have a vehicle anymore, they can. Or people with cars who don’t feel like driving all the time don’t have to drive. There’s a population, including folks age 50-plus, that want to live in the urban core now. We’re creating a place where livability can happen.

Albuquerque does already have a spectrum of transit services. We provide a half-million rides a year through our Sun Van services. We have bus services that connect with other main bus lines. And we're working on developing partnerships with ride sharing programs, which as a service have made a tremendous impact on people’s lives.

We've also added another airline to the ranks that serve us as well as a number of direct flights to some popular cities, including San Francisco, San Diego and New York City. In addition, we've brought in some world class consultants to make sure we’re super walkable as well.

3. In addition to There's a Better Way, the Heading Home Project and ART, what other programs have you implemented?

We run Launch to Learn, one of the best summer learning programs. We have more than 40 local partners, so when our kids get out of school in the spring, they have an opportunity to spend their summer in a way that allows them to lead and learn when they get back in the classroom in the fall.

For kids that are living in poverty, Launch to Learn enables them to get their immunizations, have dental work done and get their hair cut. The program helps ensure that the kids have new shoes on their feet and new clothes to wear when they go back to school.

Launch to Learn is, of course, about reading and literacy, which creates a tremendous opportunity for folks to jump in and volunteer as a summer tutor. So people who want to help the community and help the next generation, we have lots of opportunities for doing that.

I've talked to many, many people who say they are amazed at the quantity and quality of services for seniors in the city of Albuquerque. We built our first multi-generational center in 2002. The city recently opened the North Domingo Baca Multigenerational Center and we’re in the process of purchasing property for a new multigenerational center in the northwest quadrant of our city. That won’t happen while I’m the mayor but we’re putting the foundations in place.

These really are wellness centers, and it's important that they're multi-generational. One success story is the "Teeniors" program. We get our tech savvy teens and young adults to come together at our multigenerational centers with their smart devices, just one-on-one navigating the landscape of new technologies that changes every day.

The centers also act as a place for the communities to gather and discuss and make decisions. That’s where we go out and have a lot of our public meetings.

5. Your time as mayor ends this year. What would you like your "livability legacy" to be?

That we got better, that we were already good, but we went from good to great. It's a good to great story. I believe that the city of Albuquerque has one of the most robust departments of senior affairs in the country. We have taken a community that already cares about these issues, a community that has had a 50-year commitment of being a city for people all ages, and we've launched a new era of making it even better.

I'll be 55 when I get out of office, and maybe it’s a little bit of selfishness on my part, but I think we underutilize the 50-plus population in the United States. I run into people all the time who would do more if they knew about the opportunities out there. Folks in this category bring a breath of experience, lots of life lessons and a lot of wisdom. I know that my wife, Maria, and I, if we’re blessed with a lot of years, we’d like to be active and engaged. I’m so happy we live in a city that will allow us to do that

Portions of this article also appear in the "Work, Volunteerism and Opportunity" chapter of the AARP book Where We Live: Communities for All Ages — 100+ Inspiring Ideas From America’s Community Leaders. Download or order your free copy.