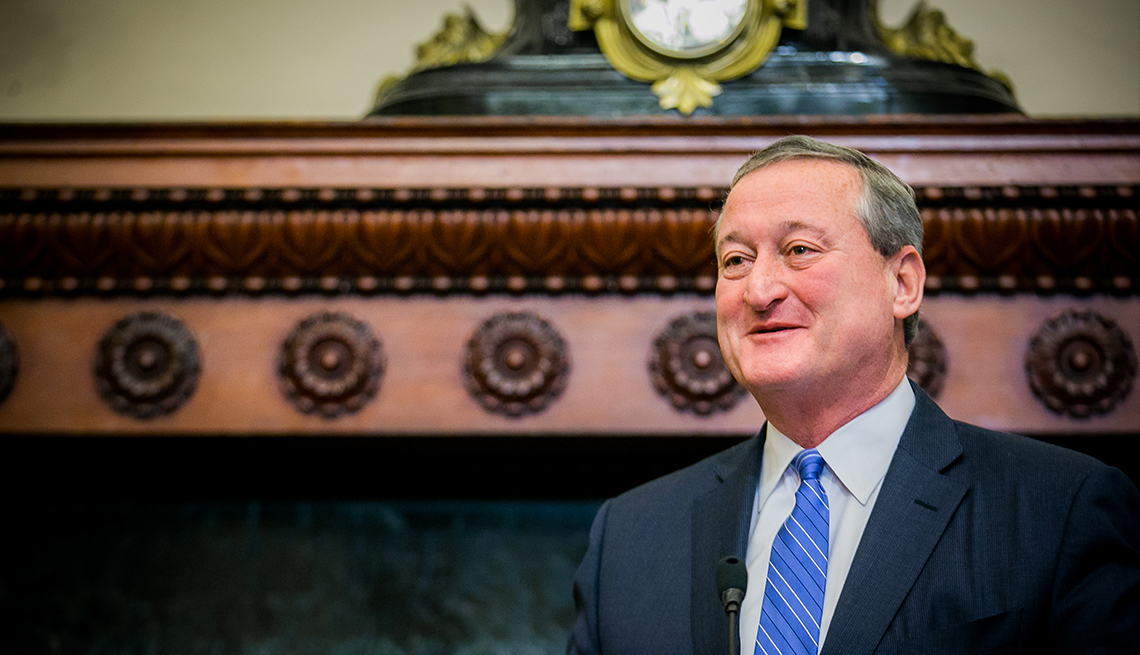 Prior to being elected mayor in 2015, Jim Kelley served for 23 years on the Philadelphia City Council.

"We've made community engagement a top priority for Rebuild Philadelphia. We want residents of all ages to get involved and help us create spaces that are welcoming and valued by everyone."

When Jim Kenney became the 99th mayor of Philadelphia, the longtime city council member, who was born and raised in South Philly, declared that the people of Philadelphia could work together to make every neighborhood "the best that it can be."

In addition to focusing on citywide concerns around crime and poverty, Kenney has directed his attention to transportation as a public safety issue by supporting multi-modal transportation options, including the creation of a brand-new position in his administration for a Complete Streets director who is tasked with making sure Philadelphia's streets "are as multimodal as possible."

In November 2016, Kenney signed an executive order creating a Vision Zero Task Force tasked with identifying strategies for building on the city's traffic safety efforts to reduce all traffic-related fatalities and serious injuries to zero by 2030. The order is a public pledge that Philadelphia's streets need to safe for everyone, regardless of age, physical ability or choice of transportation.

In a related effort, Kenney has bolstered Philly Free Streets, an annual event that shuts down city blocks to vehicular traffic so Philadelphians and visitors can explore the city without having to dodge traffic.

Mayor Jim Kenney spoke to AARP about his plans to make Philadelphia a more livable community.

1. What does making Philadelphia age-friendly mean to you? Where is Philadelphia excelling, and what needs improvement, to make the city a more livable community for all ages?

An age-friendly Philadelphia improves the lives of seniors and our aging residents by sustaining and expanding affordable housing options, ensuring access to city services — including public transportation — and addressing the social isolation many older people experience by providing vibrant cultural outlets and volunteer opportunities.

The city's commitment to low-income, elderly and special needs rental housing has been growing. Led by the new Department of Planning and Development, four market-rate rental developments are being added to the supply of affordable housing through density bonuses.

Through our Vision Zero initiative, we are focused on making it safer to get around, including for the many pedestrians and mass transit riders who are seniors.

In addition, we've launched Rebuild Philadelphia as an investment in our rec centers and libraries, both of which provide opportunities for senior citizens and others to socialize and stay active. Our older residents have been integrated into the city's Community Schools model to promote opportunities for interaction and mentorship. The Office of Arts, Culture and the Creative Economy has an Arts Access Calendar, which is a comprehensive calendar for families, groups and people of any age seeking free arts and culture activities in the city. 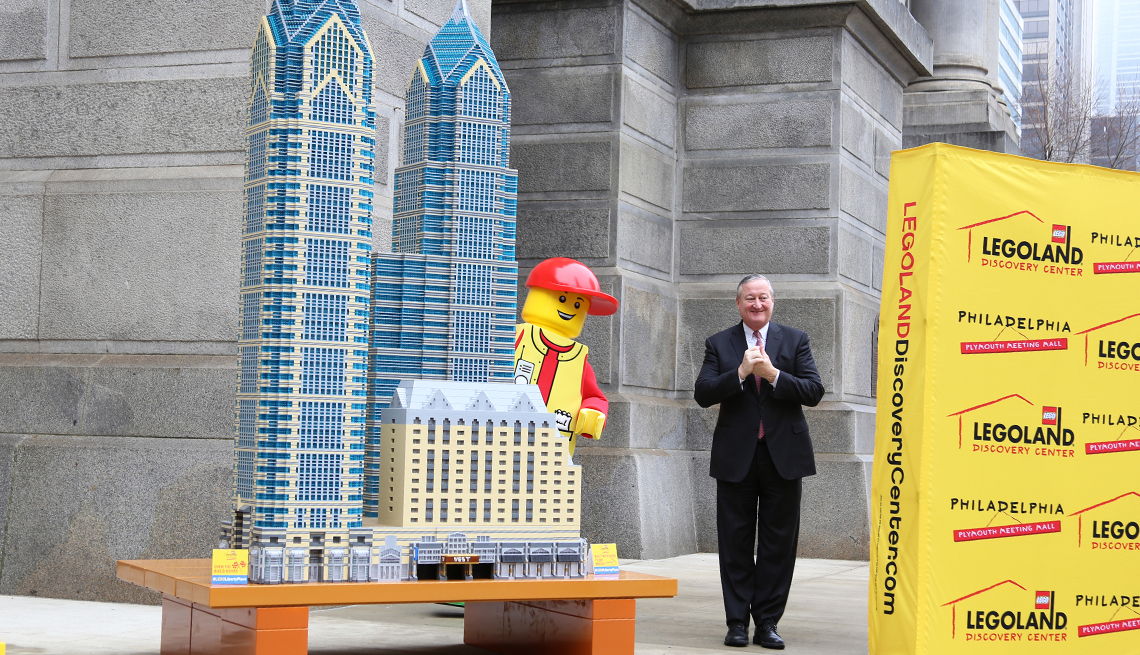 Mayor Jim Kenney and a life-size LEGO man unveil a model of Liberty Place (made from 17,760 LEGO bricks, really) at a 2017 City Hall event.

3. Earlier this year, you released a draft of the city’s Vision Zero Action Plan, which could guide efforts to eliminate traffic-related fatalities. How can that goal be achieved?

Vision Zero is a policy that originated in Sweden in the 1990s. Rather than exclusively faulting users during traffic accidents, it focuses the core responsibility on the overall system, addressing street design, vehicle technologies, traffic safety enforcement, and education. In Sweden, the approach has resulted in one of the lowest rates of traffic deaths in the world.

In Philadelphia, 100 people die in traffic crashes on our streets each year, and we know that the most serious crashes are happening on a small percent of our total street network. Vision Zero is not about eliminating all crashes — it's about eliminating crashes that result in death and severe injury. Philadelphia's Vision Zero efforts will be data-driven — focusing on our most dangerous streets — and will be led by street design. Policy changes, education, traffic safety enforcement, and street safety will support these efforts.

On September 28, 2017, we released the Vision Zero Three-Year Action Plan as final. In it, we include our High-Injury Network, which identifies our most dangerous streets, as well as strategies we'll implement in the program's first three years. Each year, we'll release an update of our progress.

Rebuild Philadelphia is the city's $500 million initiative to improve 150 to 200 parks, recreation centers and libraries in neighborhoods across Philadelphia. By investing in these critical neighborhood spaces, we're enhancing the facilities that, especially for many of our seniors, may be the only nearby places to volunteer, participate in fun activities, and feel part of a community.

We've made community engagement a top priority for Rebuild. We want residents of all ages to get involved and help us create spaces that are welcoming and valued by everyone.

This could include providing input on the types of improvements and programs that would best serve the community, joining one of the neighborhood volunteer groups that help take care of our parks, recreation centers, and libraries or just coming out to participate in a program like a cooking class or movie night.

5. With current and impending changes in federal funding for local infrastructure, how can Philadelphia create and maintain critical funding partnerships, such as with the public and private sectors?

Philadelphia is blessed with great legacy infrastructure, from our rail systems which move half a million people a day, to our water and sewer systems that provide safe drinking water and protect the environment.

We have great partnerships with public agencies, nonprofits, and the private sector around infrastructure. Recent funding increases from the commonwealth have been a great help in maintaining that infrastructure, but our needs continue to outpace our resources.

With the recent emphasis on private funding from the federal government, Philadelphia will continue to look for private capital to leverage current federal, state, and local funds. Rebuild is a great example of how the city is leveraging public funds with private investment as the William Penn Foundation has committed an historic $100 million to the initiative. In seeking public-private partnerships, we must both serve the public interest and leverage our resources smartly.

— Jacklyn Isasi is the communications director of AARP Pennsylvania