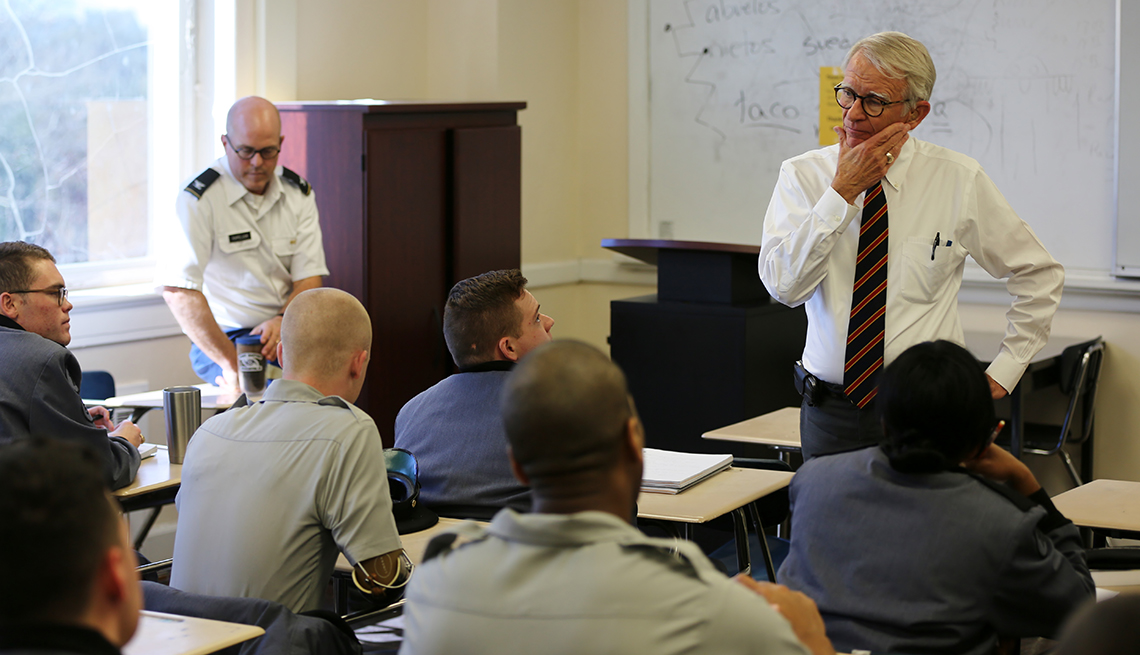 Within hours of his successor being sworn in as mayor, Joe Riley was back at work, teaching at The Citadel.

Two years ago, when he was described by New York Times columnist Frank Bruni as perhaps "the most loved politician in America," Joe Riley had already announced that his 10th term as mayor of Charleston, South Carolina, would be his last.

Upon stepping down on January 11, 2016, after 40 years in office, Riley handed over the keys to a city utterly transformed. When he was elected in 1975 as a pro-civil rights candidate, Charleston was a struggling, largely forgotten place where many residents, according to the Rev. Joseph Darby, a former pastor of the historic Morris Brown AME Church, did not necessarily accept that the South had lost the Civil War. That fact became indisputable to all by 1982 when Riley hired the city’s first black police chief. In 1989, under Riley's leadership, the whole city pulled together to survive and rebuild from the devastation of Hurricane Hugo.

Charleston is now recognized as a national leader in successfully capitalizing on urban livability to boost its economy and provide opportunities for its residents. Visitors flock to the city's walkable neighborhoods, thriving arts community and celebrated restaurants. Historic architecture coexists with smartly designed new development — including numerous affordable housing options — that fits into the city's gracious ambience.

Riley, 73, is not downshifting to an idle retirement. Within hours of leaving office he was at work at The Citadel military college where — as the Joseph P. Riley, Jr., Chair of American Government and Public Policy — he teaches, writes and organizes public events. (Riley is also a Citadel alum, Class of 1964.) This summer Riley will be opening another office across town at the College of Charleston's Joseph P. Riley Jr. Center for Livable Communities, where he will teach, do research and engage in public service. Riley has also been named a Visiting Fellow at the Urban Land Institute.

At the moment, his biggest project is to complete fundraising and finalize designs for the International African American Museum (see the image below), which is planned for the Charleston waterfront. "Forty-four percent of all slaves to North America came through the port here," Riley says, explaining the reason for building a major museum in Charleston. "Historians call this the Ellis Island for African-Americans, so we’ve acquired land in the old wharf area where so many arrived."

About his non-retirement retirement Riley says: "I've got plenty of work to do, which is good. I didn’t want to go from a busy schedule as mayor to doing nothing. I want to be productive."

1. What are the most important elements in creating a livable, age-friendly community?

It's important to always have public spaces that can be used by people of all ages and incomes. A community must always keep diversity on the radar screen — because it doesn’t just happen automatically. A city is better when it's diverse.

We're now seeing our urban cores being re-energized and invested in, and that's wonderful. But we need to make sure this doesn't drive out older people and those with lower incomes. In Charleston, we're developing the brand new Gadsdenboro Park where we've set aside space in the neighborhood for senior housing and affordable housing.  That way you'll see all kinds of people enjoying that community. It's a wonderful template for what should be everywhere. 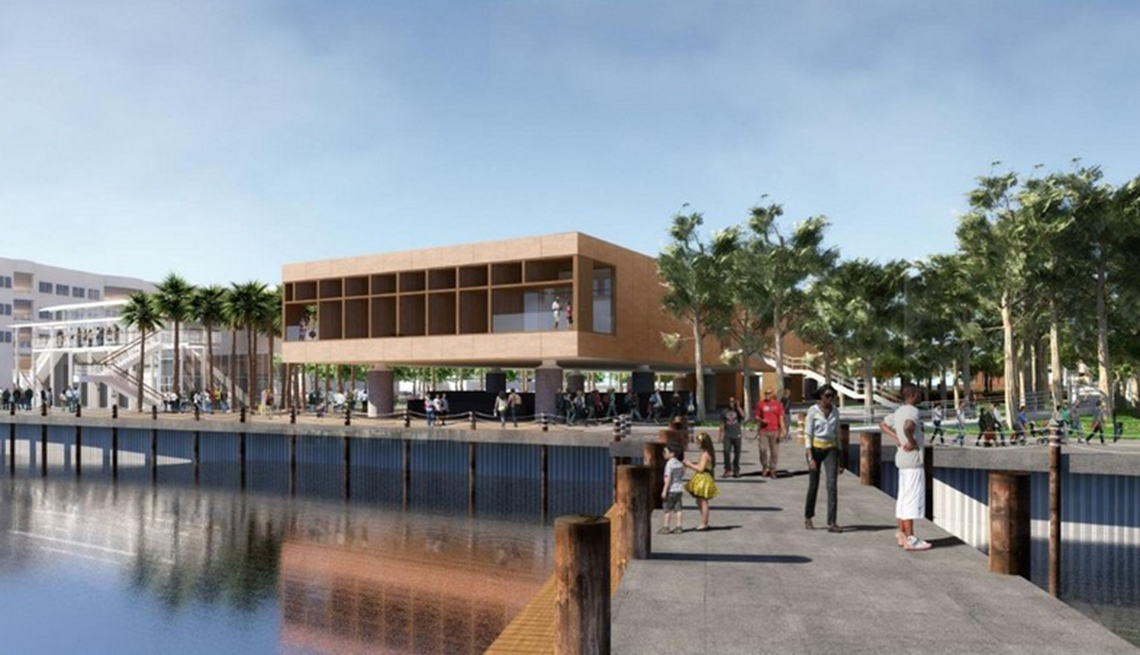 An active fundraiser for efforts to build the International African American Museum (seen in an artist's rendering), Riley says: "Historians call this the Ellis Island for African-Americans, so we’ve acquired land in the old wharf area where so many arrived."

2. You are nationally known as a champion for public spaces.  Why do they matter so much to a community?

Public spaces matter because they belong to everyone — and they matter to everyone. We feel better when we see other people joyfully using the public realm. We need that human energetic. The really great cities around the world offer lively public parks and playgrounds, and a lot of pedestrians on the streets and in business districts. That just makes us happy!

Recently in Charleston, I met an older man who was visiting a waterfront park. He was from the suburbs and would just go to the park to watch the people go by. He always sat on the same bench and became very emotional in telling me about it. He was a white gentleman, and every day an African-American gentleman would sit there with him and they would talk.

And on the day of the awful shooting here last year [when a 21-year-old white supremacist killed nine worshipers in the city's Emanuel AME Church], the other man had told him he needed to leave early for a meeting at his church. The man was one of those shot by the bigot. Without that park those two people would never have met or known anything about one another.

3. What's the best way to make sure places in a community work well for all residents?

In creating places, you need to be sure you've got designers who understand and articulate the public realm. There are many architects who do it well and many who don't. What happens at the street level, where the building meets the sidewalk, is very important. It's important to make the space a desirable place. There's so much attention paid to what happens at the top of a building. Now that's good, and I like a building that's interesting to look at. But we don’t experience cities in a helicopter — we do that on a sidewalk. That's where people are. And that's the level where we need to pay attention and make sure human beings will want to be there.

Joe Riley during his last term as mayor. — Courtesy photo 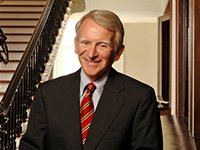 4. You were the mayor of Charleston for 40 years. What would you have done differently and what advice do you have for other mayors and city officials?

To be honest, I don’t know if I would do anything differently. I am able to say that because I worked with people who put great thought, input, listening and learning into the actions and decisions we made.

It's important to study cities everywhere to better understand your own city. And always listen to people — especially the people who are saying things you don't want to hear. When I was first mayor, Moon Landrieu was mayor of New Orleans — now his son Mitch is mayor — and he told me, "As mayor, your most important job is to listen." I've always remembered that.

5) You founded the Mayors' Institute on City Design almost 30 years ago. Why did you create it and what does it do?

In the 1970s, we wondered if cities would even survive. By the 1980s it was clear they would, so the next step was figuring out what mayors could do to improve them. Mayors today are smart and they care, otherwise they wouldn't get elected. But they often don't know a lot about placemaking.

So I thought about what would be a way to school mayors in the nuance of city design and placemaking. I got up one morning with this idea and wrote a letter about what the mayors' institute could be and sent it to some really bright people who helped me a lot, and the National Endowment for the Arts funded it.

The Mayors' Institute on City Design is one of my proudest accomplishments.  I just got a letter from a mayor of a major city in the Southwest who wrote to say he has done special things in his city because of what he learned there, as did his predecessor and the mayor before that.

A thousand mayors have now been through the design institute. Eight mayors come together with no staff, and they each bring one important issue from home to discuss with the other mayors and eight resource people from different disciplines — planning, traffic engineering, etc. They talk for two-and-a-half days with no interruptions — and then magic happens. One mayor told me he came home with a "new set of eyeglasses about his city."

Jay Walljasper is an urban consultant and author of The Great Neighborhood Book. Contact him at JayWalljasper.com.

Case studies from 16 communities in the U.S. and around the world.