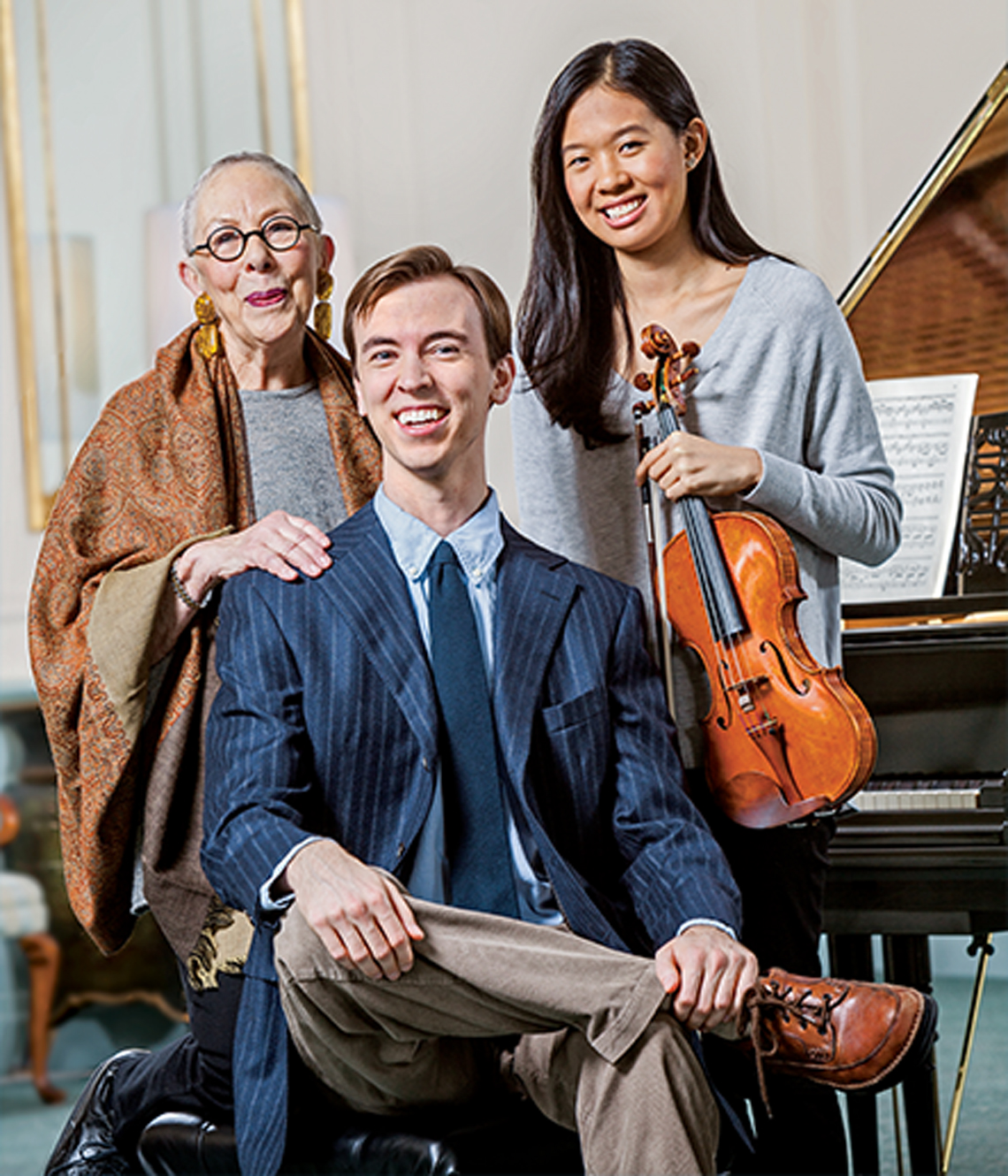 An award-winning pianist pursuing a master’s degree at the Cleveland Institute of Music, Or Re'em sometimes misses what he calls the "tribal" nature of his native country, Israel, where large family gatherings were a regular part of his life.

So when the institute’s admissions office told students about a program allowing them to live at a nearby retirement home, he sensed it could be a good fit.

As an artist-in-residence of Judson Manor, a senior living campus in Cleveland, Ohio, Re’em has his own apartment alongside 300 building-mates who range in age from their early 60s to more than 100. He receives free room and board in exchange for musical performances, helping with errands and socializing with his elderly neighbors.

"For me, it's very natural," he says. "I was very close with my grandparents before they passed away, and I used to go along with my mother, a geriatric nurse, to see patients."

Started in 2010 by a Judson board member as a way to address the housing shortage at the institute and enhance the lives of Judson’s residents, the artist-in-residence program has been a huge success — with at least four times as many applications as open spots. Judson Manor selects the applicants who genuinely want to be part of the community. Studies show there are physical and emotional health benefits for older adults who interact with younger people. That benefit works both ways. 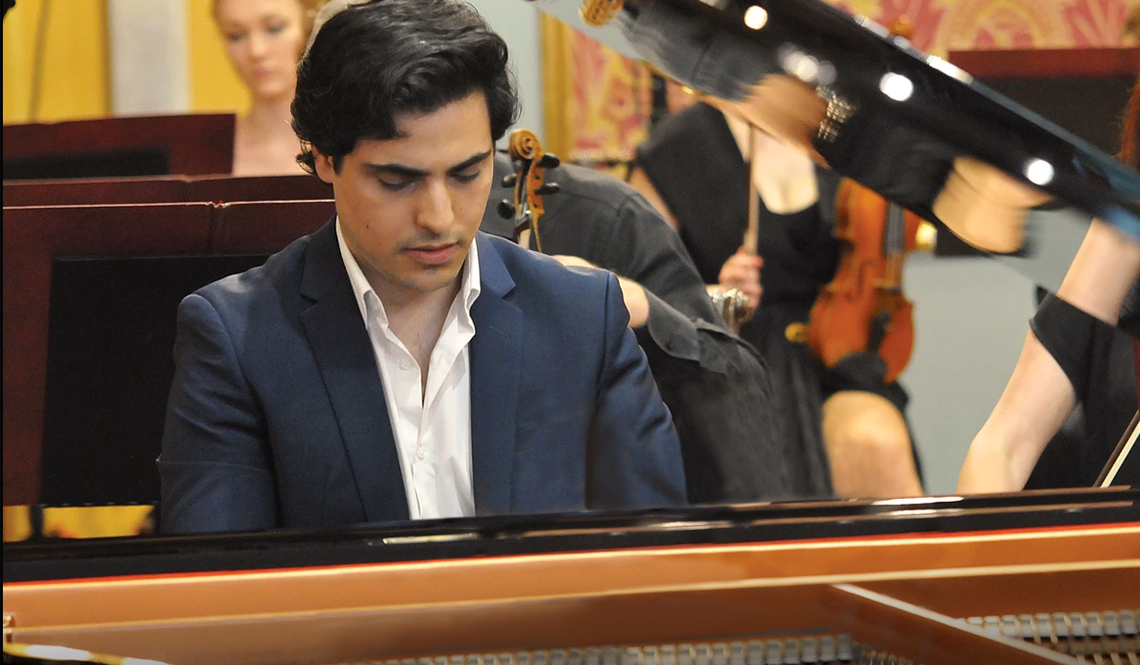 Comparing life at Judson Manor to living in a dorm as a Juilliard School undergraduate, Or Re'em (performing in Poland), a graduate student at the Cleveland Institute of Music, says, "Here I get a much stronger sense of community and family."

In addition to financial relief, students like Re'em find intellectual conversations, new perspectives and caring relationships that can ease the stresses of school.

When not at the music institute, Re'em walks the dog of a Judson Manor neighbor, practices his music in the elegant rooms of the former luxury hotel, dines with his older friends and performs as often as he can for the building’s appreciative audiences.

The pianist’s only complaint is that he can’t perform for his neighbors more often. But he understands. "The residents have regular concerts with great artists here," he says. "And they are very busy."

Following in the footsteps of Judson Manor and a handful of other intergenerational housing initiatives in the U.S. and abroad, Deerfield Senior Living in Des Moines, Iowa, launched a program in 2015 with nearby Drake University.

"We're not pioneers," says Deerfield's executive director, James Robinson, "but it was something we felt passionate about." The student selected by Deerfield receives a free apartment and meals — along with an indoor parking space, a big plus during Iowa winters — in exchange for two recitals a month. 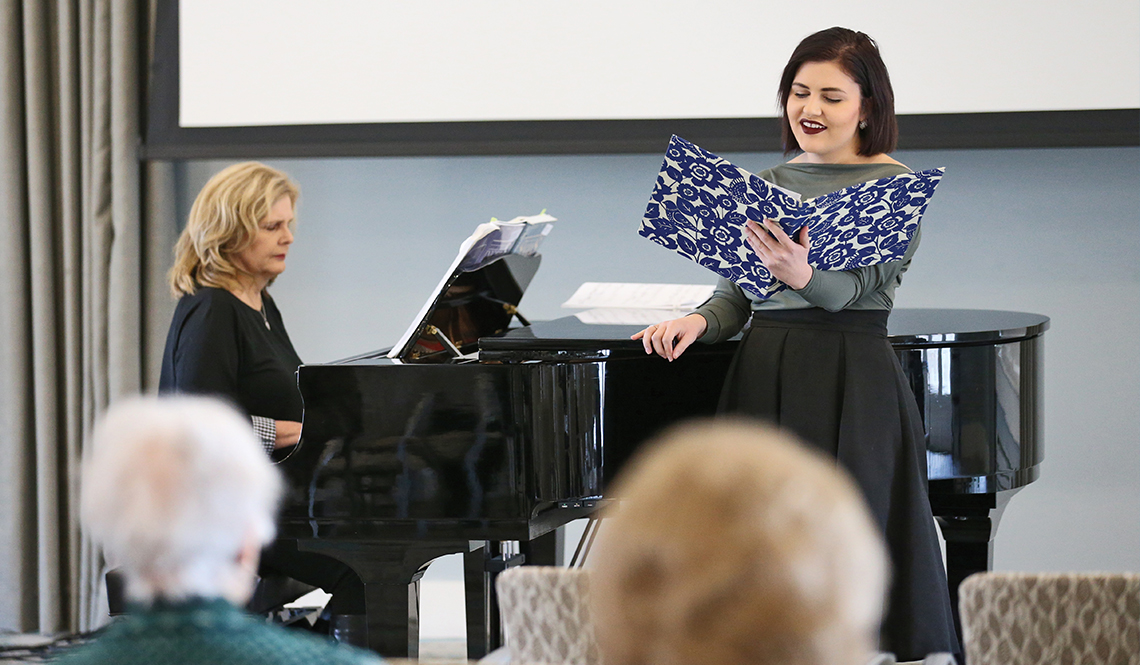 A vocal performance major at Drake University, Gabby Clutter lives cost free in a nearby senior citizen community in exchange for two recitals a month. About her neighbors, she says, "The residents are my friends and mentors."

Artist-in-residence Gabby Clutter, a vocal performance major, says she has gained confidence from performing for Deerfield’s residents. Alsie Fitzgerald, one of those residents, is a friend of Clutter's and especially enjoys the young company and serving as a sounding board.

When Clutter brought her boyfriend to Deerfield to meet her housemates, "we approved," says Fitzgerald, "but we probably would have told her if we didn't." The septuagenarian describes as "magical" the New Year's Eve gathering she attended alongside the couple.

'She just brings that ray of sunshine!' Fitzgerald says about her younger friend.

She's similarly enthusiastic about the artist- in-residence program. Says Fitzgerald: "It's great to see younger people change their perceptions of older people — that we don’t just sit around in wheelchairs but have very busy lives."

This article is adapted from the "Build Housing for All Ages" chapter of the AARP publication Where We Live: Communities for All Ages — 100+ Inspiring Examples from America’s Community Leaders (2018 edition). Download or order your free copy.