Issued in March 2015, the "Mayors' Challenge for Safer People, Safer Streets" awards competition was a call to action by U.S. Secretary of Transportation Anthony Foxx to the elected leaders of America's towns, cities, counties, tribal lands and more to "raise the bar for bicyclist and pedestrian safety."

Of the more than 200 cities participating in the Mayors' Challenge program, nearly 100 were far enough along in their efforts to be considered for the challenge awards listed below. The winners were announced on September 16, 2016.

(Cities marked with an asterisk * are members of the AARP Network of Age-Friendly Communities.)

Walking and bicycling should be considered as important as other transportation modes and should not be an afterthought in roadway design. A Complete Streets approach changes the way every day transportation decisions are made. It changes design guidelines and uses new measures of success. The ultimate goal is for pedestrians, bicyclists, motorists and transit riders of all ages and abilities to safely, conveniently, and easily use roads, sidewalks, bike paths and transit to where they need to go. 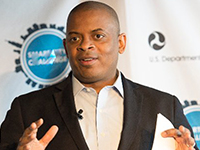 The city tackled multiple projects on major arterials to "design right" through one-way to two-way street conversions, road diets, streetscape enhancements and new bicycle facilities. One project includes converting over six miles of South Bend's largest remaining one-way street pair into two-way traffic, and then reconfiguring the layout to accommodate three travel lanes and three roundabouts. The space made available by the conversion will accommodate separated bicycle facilities, curb bump outs, street trees, street lights, medians and onstreet parking. The South Bend Complete Streets Policy states that all city-owned transportation facilities in the public right-of-way must be designed and operated so users of all ages and abilities, including pedestrians and bicyclists, can travel safely and independently.

Learn about other efforts for Challenge Activity #1

2. Fix Barriers so Streets are Safe for People of All Ages and Abilities

Transportation facilities should be accessible and provide safe, convenient and interconnected transportation networks. For example, children should have safe and convenient options for walking or bicycling to school. Fixing barriers includes addressing the needs of older adults as well as people with unique mobility challenges.

The city drafted and adopted its first Complete Streets policy and conducted bicycle safety and walkability audits. The Myrtle Beach government took steps to identify gaps in its sidewalks and also map and measure every sidewalk. Now the public works department has a complete inventory that will be periodically reviewed and updated.

Learn about other efforts for Challenge Activity #2

Pedestrian and bicycle data programs should be initiated or expanded to better understand walking and bicycling activity levels (i.e. volume), crash locations and circumstances, and existing and proposed infrastructure. This data will enable more informed decision-making for targeting improvements where the need is the greatest.

The Los Angeles Department of Transportation (LADOT) used five years of collision data to identify a High Injury Network of streets where most non-motorized crashes occur. LADOT also worked with the Los Angeles County Department of Public Health to develop the Vision Zero Geohub, a database that connects collision data and environmental conditions. In the past, due to limited time and resources, engineers often relied on citizen requests before analyzing an intersection to determine if it required improvements. This new system allows for a comprehensive querying of historical collision information to proactively identify places in need of safety improvements. The database has proven especially helpful for grant applications.

Using data collected from online sources, key-pad polling at public meetings, automated bicycle and pedestrian counters, and traffic camera videos, the city identified barriers to walking and bicycling and developed a $6.8 million Bicycle Rapid Implementation Program proposal to guide citywide investments through 2019. This work would be achieved by expanding the city's bicycle network from 42 miles to more than 70 miles of conventional bike lanes, separated lanes or off-street paths, and by completing four continuous, cross-city bicycle corridors. In addition, the city partnered with Microsoft, Bellevue's largest employer, and the University of Washington to develop a video analytics system that will leverage the city's traffic camera system to detect, differentiate, count, and track the movements of pedestrians, bicyclists and cars.

Learn about other efforts for Challenge Activity #3

4. Design Appropriate to The Context of The Street and Its Uses

Communities should move beyond minimum design standards to make streets safe and convenient for all road users. Designers need to think toward the long-term by anticipating the likely future demand for bicycling and walking facilities and not preclude the provision of future improvements.

The ongoing redesign of Queens Boulevard — a 7.2 mile, six- to 11-lane crash-prone corridor that transects more than half of the borough — exemplifies the New York's efforts to improve pedestrian and cyclist safety. So far, the work has expanded pedestrian spaces and shortened crossing distances along medians and at intersections. New pedestrian crossings have been created by installing mall-to-mall crosswalks and a new midblock crossing. The city has installed 2.6 miles of separated bicycle lanes, reconfigured or closed "slip lanes" between the main road and the service road and redesigned how drivers access the roadway.

Henderson's approach to bicycle facilities once consisted of striping 5-foot-wide bike lanes on 4-lane roadways and providing shared 14-foot-wide outside lanes on 6-lane roadways. Since the start of the Mayors' Challenge, more than 21 miles of separated bike lanes have either been installed or are currently under construction. In addition, the city has recommended separated bicycle lanes for roadway rehabilitation projects and city staff has developed a standard separated bicycle lane design. The city also reevaluated a planned rehabilitation project designed as a 6-lane road that would connect commercial properties with residential areas, schools, and sports fields. Based upon an engineering evaluation of the rehabilitation project, the city chose to use a road diet on this facility, and the project was redesigned and constructed as a 4-lane facility with a raised mile-long, 10-foot-wide separated bike lane. In 2015, the League of American Bicyclists recognized Henderson as a silver award level Bicycle Friendly Community — the first community in Nevada to receive the recognition.

Learn about other efforts for Challenge Activity #4

A bike/walk taskforce created a bicycle master plan for the city that shows the roads with dedicated bike lanes or shared-lane markings (i.e., sharrows), existing and proposed regional routes and trails, and recommendations for new facilities, including north-south and east-west bike routes to connect cyclists to the community college, transit and beaches. To encourage residents to engage in physical activity, the city developed "NorWALKer" maps featuring more than 40 walking routes through 17 city neighborhoods.

Learn about other efforts for Challenge Activity #5

Communities need to improve their rules about safe passing, turning, yielding, bicyclists who ride unlawfully and pedestrians who unlawfully cross or walk in the roadways. Strengthening codes, ordinances and practices can help to protect non-motorized users. It's also important to consider adopting or improving laws related to bicycle lights and helmets, distracted driving, vulnerable users, speed limits and land use.

Learn about other efforts for Challenge Activity #6

A comprehensive education and enforcement program can be effective in reducing pedestrian and bicyclist injuries and fatalities. Cities should publicize traffic safety laws and behaviors; educate their communities about the consequences of violating laws aimed at reducing pedestrian and bicyclist injuries and fatalities; and conduct enforcement where they will be most effective based on local crash data. Cities should also recruit local grassroots and community organizations to help educate and publicize enforcement efforts.

The Oro Valley Police Department developed a plan to address corridors with bicycle crashes that were higher than the state average, focusing on public education and enforcement. As part of the bicycle safety effort, the Oro Valley Court created a new educational diversion program for bicyclists who received bicycle traffic citations.

Learn about other efforts for Challenge Activity #7

The city installed 15 new Pedestrian Hybrid Beacons, which are crosswalk signals pedestrian can activate to stop traffic, and 18 Accessible Pedestrian Signals to help people with vision and hearing impairments navigate the street more safely. The equipment was installed in designated environmental justice areas (communities with substantial minority and low-income residents) where walking is often the only reliable way to get around. The city also launched Smart Trips Austin, an initiative that teaches people to navigate their communities through a combination of walking, biking and transit use. Following priorities set by the USDOT Ladders of Opportunity initiative, Smart Trips Austin was piloted in the Rundberg neighborhood, a low-income, predominantly minority community where low-cost travel options are in great demand.

Brownsville is focused on reducing health disparities among members of the Latino community by providing residents with a safe, walkable and bicycle-friendly environment. The city, which annually hosts several popular open streets, or "CicloBia" events, has created an interconnected network for safe pedestrian and bicycle travel. The local government is changing business as usual by ensuring that routine maintenance projects now consider ways to improve bicycle and pedestrian safety.

Here's how to conduct a walk audit in your community.