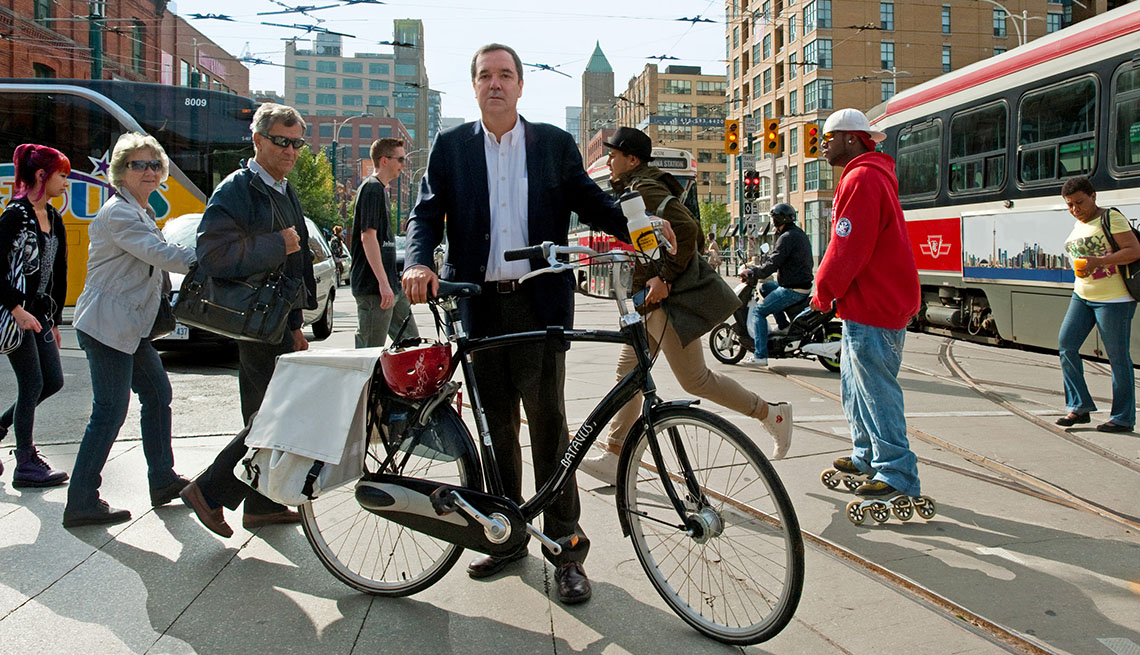 En español | There are many reasons why increasing numbers of older adults are exploring ways to get around without a car.

The drivers I spoke with for the AARP Livable Communities article "Living a Car-Free Life" agree that, despite occasional challenges, being car-free or car-lite has enhanced their lives.

Ken and Roberta Avidor, both 60 and illustrators in St. Paul, Minnesota, made a snap decision to go carless after their vehicle broke down on the freeway. They have no regrets. "Besides saving a lot of money and hassle, there are the health benefits of walking and biking more," Ken says. "And we feel mental health benefits, too. We have more contact with people and lead a more convivial life."

Urban consultant Gil Penalosa, 58, who lives without a car in Toronto and works in many American cities, observes that "older people want to have a variety of ways to get around. When older people have transportation options they can age in place and not depend on others to drive them everywhere."

Americans today remain in the drivers' seat later in life than during earlier generations. (Ninety-three percent of men and 83 percent of women over age 50 are behind the wheel at least part of the time — figures that decrease to 78 percent for men and 52 percent for women over age 80, according to Federal Highway Administration data.)

But less time behind the wheel makes sense for everyone's long-term plans. Even if you're still able to drive, life could be less stressful and more fun if you didn't have to. And think what you could do with an extra $9,000 each year. (That's the amount AAA calculates owning a car costs.)

"If older people can live without a car, or one less car, it's like winning the lottery," says Penalosa. Every year that sum could be applied to retirement accounts, vacations, entertainment, hobbies, charity, grandchildren's education funds or other aspirations.

Real estate developer Christopher Leinberger, 64, lives car-lite in Washington, D.C. "Having $9,000 in additional expenses is something many older Americans can't afford. And for others, the amount can translate into an extra $150,000 worth of a mortgage for a home they really want." 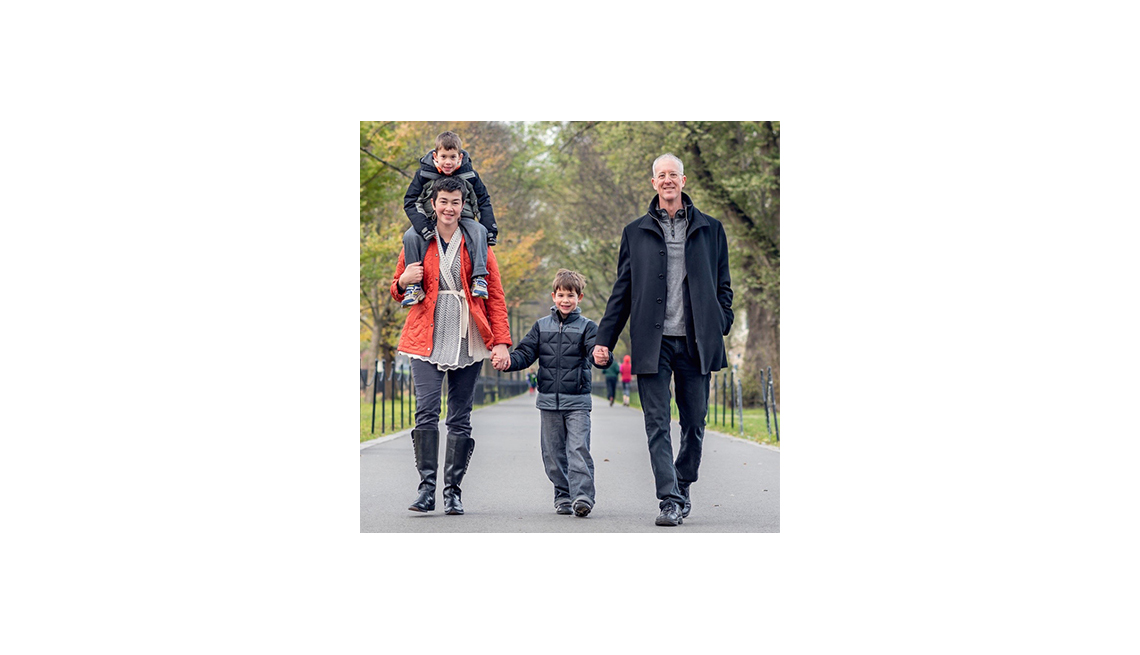 Being Blessed With Choices in Brookline

"We have one car, which we mostly drive for pleasure, like going to New Hampshire or for visiting my parents, and occasionally for convenience, such as when we'll drive the kids to school in a heavy rain," explains Jeff Speck, 51, an urban designer and author of the book Walkable City, who lives and works in the Boston suburb of Brookline.

Most of the time, Speck, his wife and their boys ages 7 and 5 walk or take transit.

"It's not some kind of statement about our virtue or our weirdness. It's simply an opportunity that a good, well-designed community gives you," he says and adds, "Uber, carshare, bike lanes, bikeshares, good transit — with these, people can make a choice to own fewer cars." 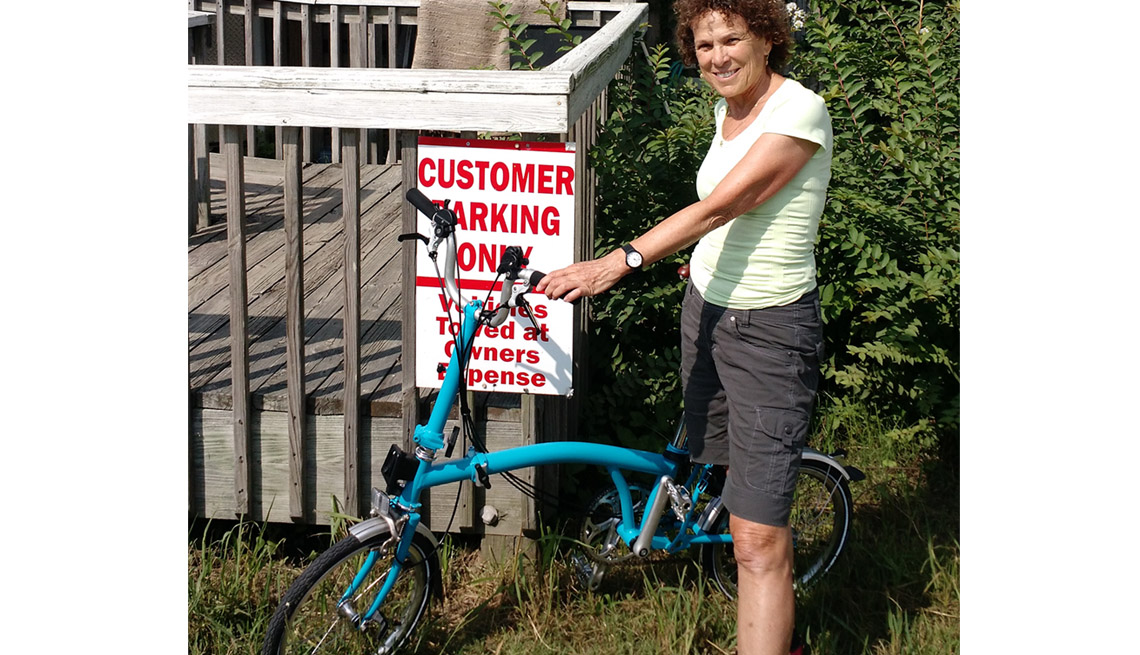 Roslyn Rubin and her folding bike.

About Town in Arlington

Roslyn Rubin, 68, has lived without a car for more than 20 years in suburban Arlington, Virginia, after an eye condition made it difficult to drive after dark. "I ride trains, buses, one of my bikes, and I walk. And I just started using Uber to get to a health club that is impossible to get to by bus or bike."

"People used to look at me like I was strange when I told them I didn't have a car," she remembers. "Now it's not a big deal to them. And for me, it's getting easier and easier all the time. We have more bike lanes, and I have a folding bike I can take on the train. I use an app called Next Bus which, just as it says, lets you know when the next bus is coming."

Rubin, who recently retired from a telecommunications firm, says she feels safer on the streets in and around D.C. today than she did in the 1990s, when street crime was at a peak. The sidewalks are bustling with people until at least 10 p.m. on the seven-minute walk from the train stop to her townhouse. "A lot more of my neighbors are out walking now."

Arlington, where biking and walking account for 16.6 percent of all trips around town, encourages residents to consider living without an automobile with its Car-Free Diet, which is an informational and inspirational resource about reducing the daily intake of motorized mobility.

"I've got a $500 vehicle and a multibillion dollar back-up system," jokes Arlington resident Peter Harnik, 66, who bikes — sometimes all the way to his Washington, D.C., office at The Trust for Public Land. Other times he bicycles to a Metro train stop about a mile from his house. Harnik and his wife put less than 6,000 miles on their car every year, and those miles are usually from trips to the beach, the mountains or big-box stores.

Harnik's family has been car-lite for two decades, including when their son and daughter were living at home on a leafy block of single-family homes. "It's much cheaper than being car dependent, and we both waste less time searching the house for car keys. Once every six months or so, we need the car at the same time. Then I'll call a cab." 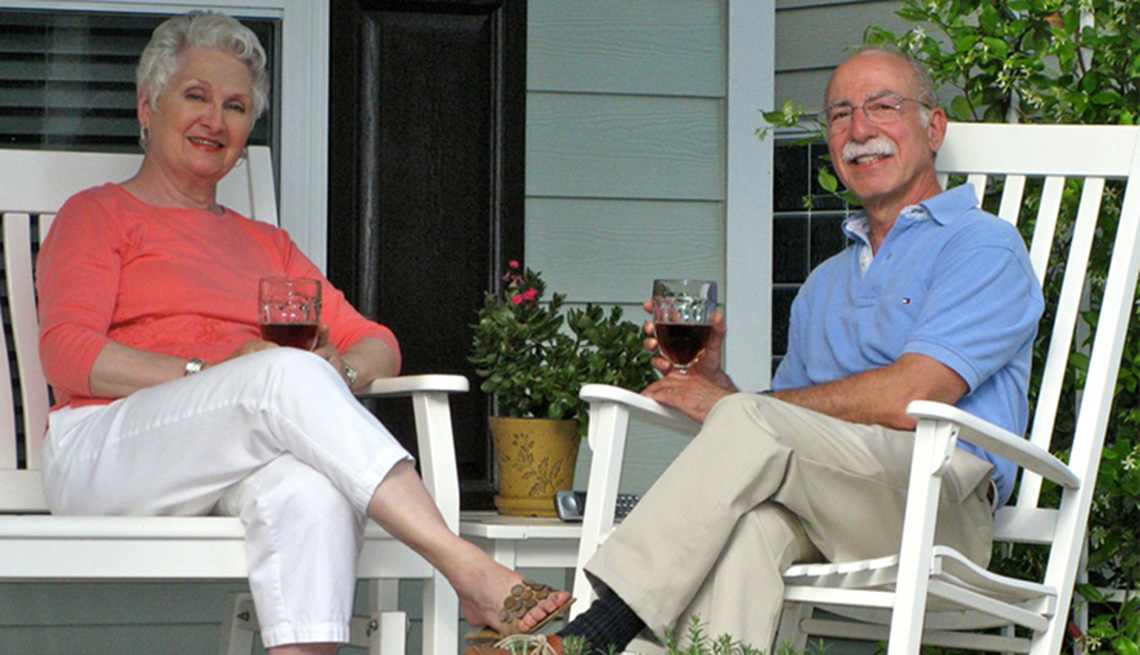 The Goodmans can walk to town from their home.

Sharing One Car in Suwanee

"Retired couples, even active ones with busy schedules, can often manage with just one car," says Dick Goodman of Suwanee, Georgia, where he and his wife, Louise, both in their 70s, get by just fine with one vehicle.

"The key is that we schedule our lives with a shared electronic calendar," he says. "By entering appointments, events, meetings, and the like in the calendar on any one of our devices, they're updated on every device. Louise and I are always aware of who needs the car when and for roughly how long. So, if I'm scheduling a meeting or a lunch date, all I have to do is bring up the calendar on my phone and see if there's a scheduling conflict for the car."

The native New Yorkers jokingly compare their single sedan to operating a New York City cab. "One driver returns the car to the garage and another driver hops in and heads out," explains Dick. "The seat never cools down. It’s been working beautifully for more than a decade." 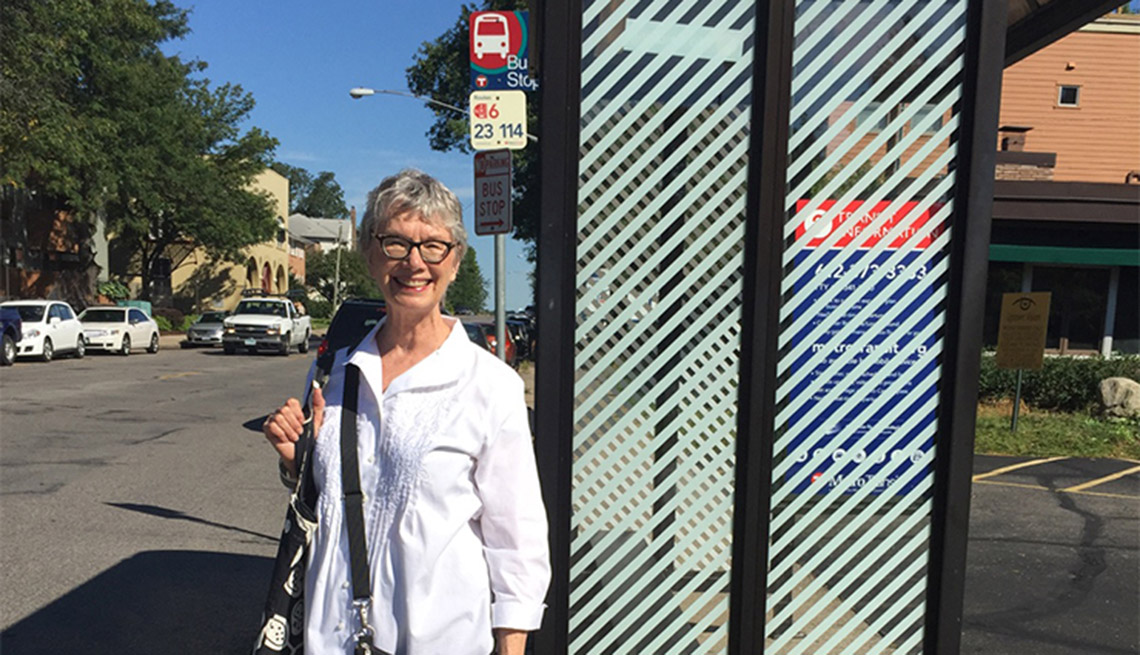 Patricia Blakely waits for a bus.

On the Move in Minneapolis

Retired business executive Patricia Blakely, 70, who now works part-time as a spiritual director at a church, admits, "I really loved my last car, a Subaru Forester." But seven years ago she decided to experiment in living car-free after a series of mishaps familiar to anyone who drives — a $1,500 repair bill, another $233 charge when her car wouldn't start in the grocery store parking lot and then she was rear-ended (without harm) at a stoplight.

Blakely's main reason for ditching the car was financial. "I realized — with a jolt  — that $1,500 would cover 1,000 bus fares," she explains, even though she had seldom ever ridden the bus. "With the money saved, I'm taking more trips, including one to Ghana, West Africa" to visit her son and his family.

But Blakely has discovered other unexpected benefits. "I feel healthier because walking is now built into my day, every day," she writes in her book, CarFree Living: Happy in the Not So Fast Lane. In fact before giving up her car, Blakely was diagnosed with osteoporosis in her spine and hip, but a recent bone density test downgraded the condition to pre-osteoporosis.

Blakely walks to the grocery store, bank, restaurants and a favorite coffee shop in her neighborhood, which consists mostly of single-family homes with yards. She rides the bus downtown to work and to shop at a Target store. A friend drives her to Tango dancing, and she chips in $5 for gas to make sure the arrangement remains "reciprocal." Blakely will occasionally grab a cab if inclement weather arises, and she will rent cars for longer-distance journeys. She just signed up for a carshare program.

"You might think living without a car would close off options and make my world smaller, but instead my world opened up in some surprising ways," she writes. "I experienced the sights, the sounds and the scents in a way that I would have missed driving. ... I will not be one of those women in her 80s, dreading the day her kids take away her car." 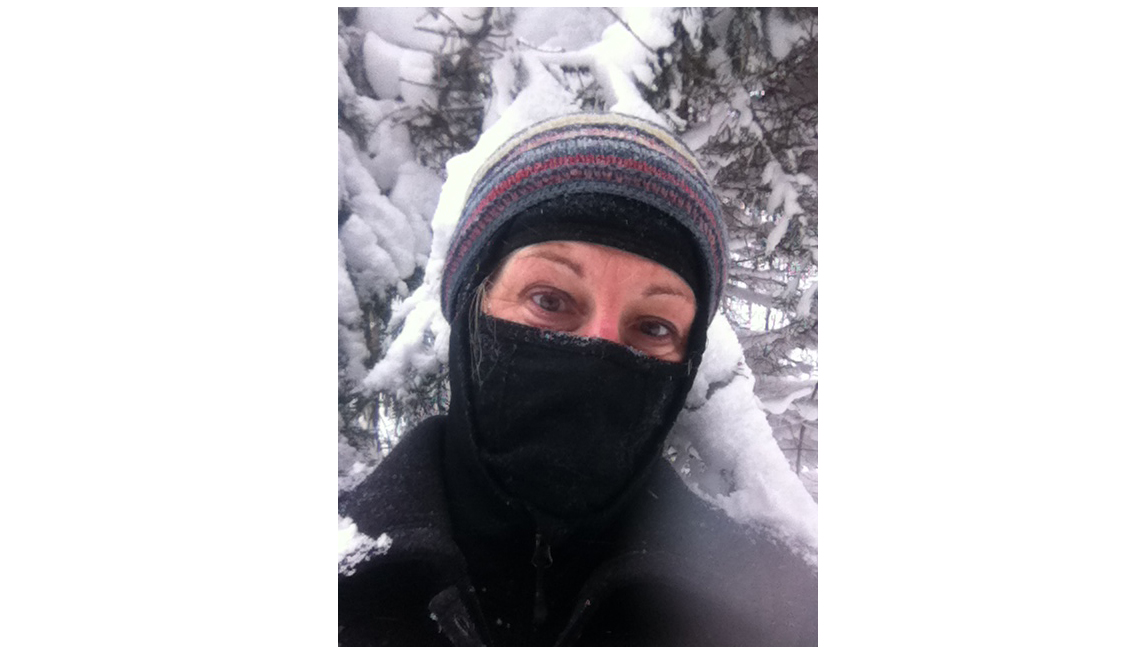 For 12 years, Diane Miller biked 20 miles to and from her job teaching communications at Finlandia University in Hancock, Michigan.

If you don't think that's impressive, keep in mind she rode throughout the winter in the far northern reaches of Michigan's Upper Peninsula.

"A lot of people thought of me as a character," she says. "But I really enjoyed it. You use your senses so much more on a bike. You can smell what people are having for dinner and see wildlife — and think about being a woman in her 50s who can eat all she wants!"