The South Austin chapter of AARP meets at the South Austin Senior Activity Center, which is located near a busy intersection on a fast-moving four-lane road. Users of the activity center often get there by walking or taking a city bus, which stops directly across the street.

Since the road has a painted crosswalk, cars are supposed to stop and give pedestrians the right of way. But the cars seldom stopped. Pedestrian fears about having to dodge moving traffic became such a worry that some AARP members stopped attending the meetings and overall use of the senior center declined.

Advocacy work by South Austin residents and AARP Texas resulted in the installation of an interactive traffic signal. Today, the senior center visitors and the community at large can safely cross the road. 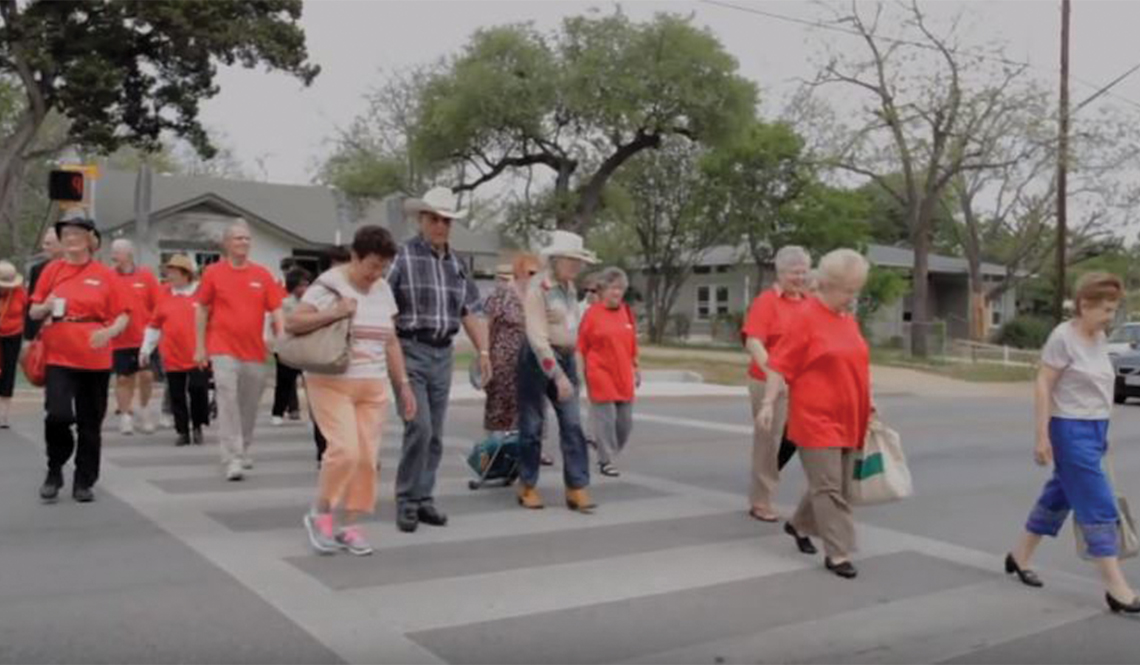 Image from a video by AARP Austin

Older residents of South Austin, Texas, use a crosswalk they advocated to have installed.

What: A traffic light and pedestrian hybrid beacon (PHB) were installed at an unsafe crosswalk.

When: The advocacy work began in late 2011. The crosswalk was inaugurated in April 2013.

The road has four lanes, two in each direction, and a posted speed limit of 35 mph.

WHY AND FOR WHOM

The crosswalk is located next to a senior center where various organizations have meetings, including the South Austin Chapter of AARP. While the impetus for a safer crossing was to make the area accessible for people who walk or take the bus to the senior center, the safety improvement benefits everyone in the largely residential area, including students and parents walking to local schools.

The AARP Chapter of South Austin decided to do a safety audit, which involved conducting an on-the-ground walkability assessment of the neighborhood and observing the Manchaca Road crossing. The audit, which was conducted on October 17, 2011; it was facilitated by Jessica Lemann, who coordinates Austin area outreach and events for AARP Texas. The audit was done by AARP volunteers.

The audit confirmed that the area was extremely unsafe for anyone needing to cross Manchaca Road. Vehicles often exceeded the speed limit and almost none respected the crosswalk. (Watch a video of the South Austin safety audit in action.)

With their observations in hand (documented by the video and a detailed report about the audit results), members presented their concerns to Austin City Council member Chris Riley. He agreed to help, suggested the use of a “pedestrian hybrid beacon” and assisted the residents in preparing their request.

A pedestrian hybrid beacon (also referred to as a PHB) is an on-demand, pedestrian-controlled stoplight. A pedestrian engages with the system by pressing a button, which causes the associated traffic light to go red and activates a walk signal that provides both visual and audio instructions. The end of the crossing time is signaled by a blinking red light, and an audio cue warns pedestrians that their 25-second crossing window is about to close. Vehicles are required to treat the blinking red light as a stop sign and let pedestrians walk before proceeding.

The most challenging part of the process involved navigating Austin’s multistep process for requesting a traffic signal and pedestrian beacon. (See the city of Austin’s PHB requirements here.) The process weighs factors including pedestrian-oriented uses and infrastructure, safety issues and the presence of nearby transit stops. Although 100 qualified locations have been identified, the city of Austin is only able to fund a handful of crossings per year.

AND HOW THOSE HURDLES WERE JUMPED

Having AARP members come together and work as a team helped, as did having a respected community-based organization (in this case, AARP Texas) reach out to a city official who assisted in meeting the city’s requirements. Also, because the crossing was especially unsafe and the location is close to schools and a senior center, the request ranked high among the city’s needed arterial roadway improvements.

THE COSTS (AND WHO PAID)

The pedestrian hybrid beacon was paid for and installed by the city of Austin and cost about $60,000. The city installed and maintains the crosswalk equipment.

"We saw a problem. We documented it clearly, and we took it to city leaders," chapter member Mary Ragland told the Austin Post in 2013. "It was a great feeling knowing that we were able to make South Austin a little friendlier to seniors who go to the center, folks taking the bus and the neighborhood at large." More good news: An AARP chapter member who had stopped attending meetings at the senior center due to her difficulty with driving and fear of crossing Manchaca Road now feels safe enough to walk to and from the meetings.

The Manchaca Road project has made the area more walkable for all community members. At the time of the pedestrian hybrid beacon installation there were 32 similar crosswalks throughout the city. The Austin Transportation Department is working to upgrade all of the city’s old crosswalk signals (the ones with buttons that don’t provide any feedback to users) and evaluate the need to install them in other locations.