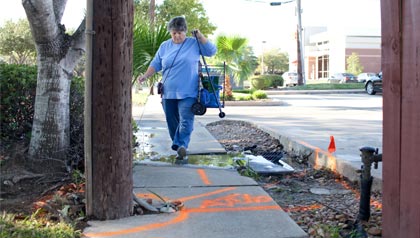 En español | Getting to work and church or running an errand used to go smoothly for Lois E. Carlisle when all she had to do was hop into her 1998 Cadillac DeVille. But car repairs and other costs forced the 64-year-old Houston resident to give up driving the vehicle she loved and find new ways to get around, mainly by bus.

"Bus transportation is my life. I do my grocery shopping on it and everything," said Carlisle, who relies on the bus to get to her job at the Evelyn Rubenstein Jewish Community Center's Meals on Wheels program.

There are drawbacks, however, such as long waits between buses and broken sidewalks in her neighborhood near the bus stop.

Those kinds of problems for pedestrians and public transit users — plus road hazards for bicyclists — led AARP Texas and other organizations to push for "complete streets" legislation in Texas.

The effort is twofold: making more transportation options available, including bus and rail service, and designing roadways and sidewalks so they are safer, said Tim Morstad, AARP Texas associate state director for advocacy.

To do that, he said, those options need to be considered when a community is planned or during street renovation.

"It just takes some forethought on the front end or some determination from the back end."

Among older Texans who can no longer drive or afford cars, a complete streets approach is a necessity, Morstad said.

"Making non-vehicular travel convenient, attractive and safe is the key for continued independence," he said.

Older pedestrians or people using walkers and wheelchairs may need curb cuts and walk lights set at durations so they have sufficient time to cross the road, Morstad said.

Houston, Dallas-Fort Worth, Austin and San Antonio are ranked among the top 25 most dangerous places for pedestrians in the nation, according to Transportation for America.

The group's report, "Dangerous by Design 2011," examines nationwide pedestrian deaths over the past decade. More than 4,200 Texas pedestrians were killed during that period, and more than 500 of those killed were 65-plus.

A challenge for the complete streets coalition is getting the Texas legislature on board.

A bipartisan group of lawmakers proposed legislation this year to require cities and counties that receive state or federal transportation funding to consider motorists, public transit users, cyclists and pedestrians in their planning.

The bill was approved by House and Senate committees but was not acted on by the full legislature.

They plan to emphasize that the program doesn't cost any additional money and that it doesn't tie the hands of local officials because it only requires transportation planners to consider additional options.

To volunteer to conduct pedestrian safety audits or to learn how to explain the complete streets approach to elected officials, visit safestreetstexas.org.

Kelley Shannon is a writer living in Austin, Texas.