En español | When Tony Barcena, a 57-year-old insurance agent living in Winter Park, Fla., was in the market for a new car, he wanted something stylish. "I consider myself a very hip person," he says.

See also: How cars are getting smarter.

So two weeks ago he purchased a 2011 Hyundai Sonata. Barcena was attracted to its slick body and alloy wheels. A "classy" car, it reminded him of the Mercedes, but still had all the essential features that will allow him to easily drive it as he ages, including Blue Tooth, which has a hands-free phone feature, a built-in navigation system and "outstanding" visibility. It's also light and easy to park.

"The whole car is unbelievable," he says. But what's most important, he adds, "is this is not an old person's car. It has style."

And therein lies the rub for the beleaguered auto industry.

"Boomers are different, more hip," says George Kang, vice president for strategy at Edmunds.com. Yet this generation could certainly benefit from features that accommodate the realities of the aging body — even if they won't admit it.

Finding a way to satisfy both the wants and the needs of this market is critical for the future health of the entire auto industry, especially domestic automakers climbing out of bankruptcy. By 2015, no less than 66 million people, or one-fifth of the U.S. population, will be 60 and older. Already today nearly half of all new car buyers in the country are boomers. 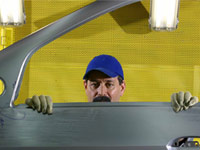 Building cars that are better fits for boomers.

"It's an irresistible market," says David Cole, emeritus chair of the Center for Automotive Research. Numbers aside, it's a demographic with a significant amount of disposable income. "If you're a car company and you don't pay attention to this market, you're making a really big mistake," he says.

How to build for boomers

Exactly how to court boomers seems to be a confounding question for automakers. They're terrified of explicitly marketing products that could be perceived as geriatric or old.

"If that demographic has any feeling that the car is made for senior citizens, it won't fly," says Kang. Automakers sense this, and they're so concerned about being perceived as catering to older people that they're skittish about even discussing their initiatives. Yet they're clearly taking steps to serve this market.

By far the boldest approach is coming from General Motors — at least judging from an exclusive tour it gave the AARP Bulletin of a facility at its Technical Center in Warren, Mich. Rather than incorporating a handful of creature comforts that older customers may appreciate — bigger door handles that are easy to grasp, for example — GM is studying the needs of older people in hopes of building vehicles from the ground up to satisfy them. The effort is called the Independence Project.

The project started three years ago with intensive research on what boomers want — but without explicitly asking them. Researchers shadowed dozens of boomers around the world for six months to see how they live and get around. The senior staff engineer and project manager for research and development, Carl Wellborn, acknowledges that part of GM's undoing in recent years can be traced to its arrogance: presuming it knew the cars that customers wanted to drive. "We've not done the best job historically of addressing customer needs," he says.

Based on its trove of research, GM stripped down several existing cars and rebuilt them with from-scratch modifications aimed at addressing needs revealed in the field, and the results are sitting in the Warren Technical Center.

Next: Building specific kinds of cars for a specific customer. >>

The walls are virtually barren except for four posters displaying photos of older Americans, each near a different prototype. There's Joseph, 64, smiling above a compact car. He's retired and living on a small pension. Near an SUV are Luis and his wife, Marta, both 65. They're retired with more disposable income to spend on a car, and part of the sandwich generation with children at home and aging parents of their own. Gunther, 60, is a practicing surgeon pictured with his wife, Eve, 59, next to an expensive sports car.

The compact car includes a front door that swings far back, to 150 degrees — completely out of the way — providing easy access. The obtrusive column called the B pillar, which splits the front and rear door openings on light passenger vehicles, is eliminated, so you can easily load and unload big items, like a surfboard or, as the case may be, a wheelchair. Seats also fold flat into the floor for even more space.

The SUV, a modified Saturn Vue, features a narrower doorsill — the strip of metal along the bottom of the door frame — making it easier to enter and exit the vehicle. The windshield is taller so you don't need to strain your neck to see a traffic light. In the back, the head rests automatically retreat into the seat when there are no passengers, providing better visibility.

The floor of the hatch space in the sports car is totally flat, providing an open cargo area that's easy to load. The car is designed to woo an active, vital older driver who "wants to relive their youth," says Wellborn. "We're providing a lot of help, but we're cloaking it in cool."

After a battery of focus groups, Wellborn says, "we believe we had a strong enough reaction that we needed to move forward aggressively." What that means in real terms GM won't exactly say, other than that these features, if adopted, could appear on cars as early as three years from now. Even then, Wellborn says, they wouldn't be touted as exclusively for older drivers.

Given the conventional wisdom of his industry, it's easy to see why.

Gearing up for the boom — slowly but surely

"You will never see us designing a vehicle that's only for people north of 60 or 70 years of age," says Klaus Busse, head of interior design for Chrysler Group LLC. Instead, like a lot of its competitors, Chrysler seems to be taking a piecemeal approach, slipping in features that older drivers may appreciate, but which don't necessarily label the entire vehicle as geriatric.

The 2011 Jeep Grand Cherokee, for instance, lowers itself to the ground at the push of a button, making it easy to enter and exit. A display shows speed in a large font, prominent grab handles make the doors easy to open, and five extra inches of legroom in the back is a blessing for anyone with stiff knees. "We have a boatload of features that are of value to these people," says Busse. It's just that they don't advertise that fact. He adds that he would be "proud" to see an 80-year-old driving the Cherokee.

At Ford, engineering standards must include drivers of all ages, according to spokesman Robert Parker. "Visibility, ingress, egress, operation of features, comfort, design are all taken into consideration," he says. But if "boomers don't want cars designed for old people," as he believes, how is Ford going to design a car for everyone? Technology is part of Ford's answer.

Parker points to the MyFord Touch infotainment system, which lets drivers use voice commands to operate everything from temperature controls to audio and a hands-free phone, as an example of a technology that older buyers will welcome, because they don't have to take their eyes off the road.

Toyota's national manager for advertising and strategic planning, Bob Zeinstra, says boomers "continue to buy us, and we want to continue to appeal to their needs as they grow older." The 2011 Toyota Sienna, whose average buyer is over 60, offers the option of the first factory-installed seat that rises and descends in and out of the vehicle for people who have difficulty climbing in on their own.

But do these specialized automotive designs miss the mark?

But these are timid, noncommittal efforts, according to some. "From what I've seen, no one is exactly targeting this market," says Tom Mutchler, senior automotive engineer for Consumer Reports. "I think everyone is trying to get a youthful audience." He says that as cars have gotten more stylish, they've become harder to see out of. Automakers, he says, "have some work to do in cultivating this market."

Gerald C. Meyers agrees. He is a professor in the University of Michigan's Stephen M. Ross School of Business and also happens to be an 82-year-old driver. "Much more needs to be done to get people comfortable in cars as they age," he says. And if his case is any indication, boomers won't give up the wheel until they absolutely have to.

As proof of the paradox automakers are facing, look no further than another branch of GM, which is taking a completely different approach than that of the Independence Project.

Buick models are being remade into sleek Euro-sedan style vehicles to combat their reputation as staid and boxy old-mobiles. The idea is to attract a "universal customer base, that is, a car that can attract customers of all ages," according to Craig Bierley, advertising and promotions director for Buick and GMC. But this is a brand with a loyal following and customers known for buying 15 Buicks over their lifetime.

In aiming young, Buick runs the risk of alienating its existing customers, says Meyers. He wonders how any brand can be "all things to all people."

John Kuiper, for one, thinks it can't. A 55-year-old financial adviser living in Plainwell, Mich., Kuiper owns five Buicks handed down from his parents. He endures taunts from his friends that he's driving an "old person's car" because he enjoys the comfortable ride, roomy interior and huge trunk — something he says is lacking in the "sharp-looking but smaller" new models. "If I did buy a new car, it probably would not be a Buick," he says.

Whether or not automakers can build cars that accommodate aging drivers yet appeal to everyone remains to be seen. In the meantime, when you go to look for a new car, ask yourself some questions that the dealer can't answer. How easy is it to see as you back out of the driveway or a parking spot? Are the gauges easy to read? Do you have to duck uncomfortably in your seat to see a traffic light? In the end, asking these questions and making these demands just may help force automakers to build better cars for everyone.

Julie Halpert has been covering the auto industry for two decades. She lives in Michigan.