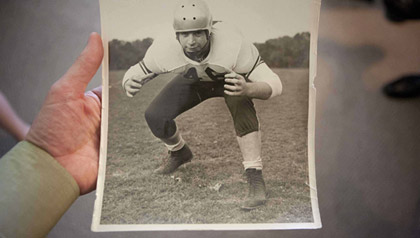 Bruce Schwager, once a lineman for the U.S. Merchant Marine Academy and a member of the NFL players union, in his room at the Silverado dementia-care facility in Sugar Land, Texas, May 26, 2011.

Bruce Schwager had several careers. An engineer, he worked on the Apollo lunar module and as a nuclear engineer. He was an officer in the U.S. Navy and even a volunteer constable sheriff. "He was incredibly both intelligent as well as self-taught," says his son, Joshua Schwager, 42. "He expected a lot of himself and others."

But it was the brief four years Schwager spent on the roster of the National Football League's Chicago Cardinals that had a dramatic — and some say traumatic — impact on his last days.

A lockout, then eviction notice

Drafted in 1955, Schwager joined the Chicago Cardinals as an offensive tackle but was called to serve in the Navy. In 1959, he was placed on waivers having never played a regular season game; however, he did participate in two training camps and became a member of the NFL Players Association, the players' union, according to his son.

So in 2009, when Bruce Schwager was institutionalized in a dementia care facility and the family became overwhelmed by the costs of his care, they contacted the NFL Players Association, the league's union, for help.

"The Player Assistance Fund, to their credit, did reach out to the family in 2009 to give them help, " says Smith, a trial lawyer who represents a number of retired NFL players. "But it was their reaction after the lockout that made things difficult."

The NFL lockout, which has pitted players and owners against each other in negotiating a collective bargaining agreement — including increased benefits for retired players — officially began March 12.

Just a few days after the lockout, the NFLPA contacted Joshua Schwager. "I was told that there was a limit to the care," Joshua says. "The NFLPA sent an email saying they were no longer going to bear financial responsibility for my father at Silverado."

Schwager was to be evicted July 2 from the dementia care facility where he had lived since 2009, Silverado Senior Living in Sugar Land, Texas.

The family had started packing up Schwager's belongings and dreaded the date, but it would ultimately have no consequence. Schwager, 78, died June 19 at Silverado.

Next: Family tries to heal from loss, but timing is suspect. >>

Schwager family members, including Bruce Schwager's wife, Bette, say the union never mentioned the lockout as the reason. But the sequence of the lockout then the notice to the Schwagers makes the family and Smith suspicious.

"I believe [the union] got spooked when the lockout happened," Smith says. "It's hard to get around the timing of it." 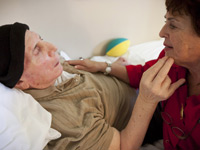 Bruce Schwager and his wife, Bette, at the Silverado facility.

Smith stresses the family had no beef with the NFL but was greatly displeased with the union.

Calls to the NFL Players Association were not returned, but emails between Joshua Schwager and a players' association representative that were provided by the family confirm the union's plans to cover $350 per day for Schwager's room and board at Silverado. It was expensive — payments eventually exceeded $250,000. But it was a plan the family relied on when Bette Schwager sold the family home in Katy, Texas, and moved near the facility.

In April, the players' association notified Silverado that it would no longer cover Schwager's expenses, Joshua says. Silverado then notified the family that Bruce Schwager could no longer be a resident if there was no guarantee to cover his care. "They said after 30 days, they have the right to invoke a 15-day eviction process. We were stunned," Joshua says.

Silverado would not confirm the letter or financial arrangements, citing patient privacy laws. But Joshua said the facility was gracious while the family tried to come to an arrangement with the players' association.

For now, the Schwager family is trying to move past the months of uncertainty in a positive way and heal from their loss. Joshua says it's the way his father would have wanted it.

"Anything to help others avoid this experience would be of benefit," Joshua says. "It's just an honor to honor him."