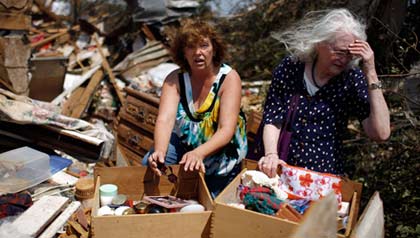 As a tornado barreled toward her three-bedroom brick home in Birmingham, Ala., LaShunta Tabb dragged a mattress from her bedroom and into a hallway. She and her four children then crawled beneath it and fought to hold on during the storm's onslaught.

"I tried to stay calm for the kids," Tabb, 33, recalls of last April 27, a day when severe weather killed more than 200 Alabama residents. "All the windows burst at the same time. Debris was just flying everywhere — clothes and furniture. It was like a whistling sound."

The tornado miraculously left the family with minor aches and sprains but, according to Tabb, demolished half of her one-story, three-year-old house and knocked out its water supply. Tabb promptly applied to the Federal Emergency Management Agency (FEMA) for assistance, and a representative came to inspect the home two weeks after the tornado.

During the inspection, Tabb says, the representative asked whether she and her family would live in what was left of their house. Not sure she understood the query, Tabb asked to have it repeated. "She asked me again: 'Would you live here?' " Considering the damage that surrounded them, Tabb was shocked. "I just paused and looked at her. I didn't say anything."

Soon afterward, a letter arrived informing Tabb, much to her surprise, that her home had "insufficient damage" to qualify for FEMA assistance.

"I was like — what the [heck]!" recalls Tabb, a bartender at a local country club. She and her family are now staying with Tabb's mother.

Appeal in the works

Tabb claims insult was added to injury when she traveled to a Birmingham FEMA office to appeal the decision. "They had my name spelled wrong, they had the wrong FEMA ID number and they told me I had a FEMA trailer on my lot, which I do not," she says. Her appeal is pending.

"Errors do occur when you're in a large-scale event," says Mike Stone, a FEMA spokesman in Birmingham. "But we do want to make sure that any errors are corrected. We've encouraged residents in Alabama to contact us when they get that initial determination letter." Applicants have up to 60 days to appeal.

Declining to address the specifics of Tabb's case due to confidentiality concerns, Stone said that as of early July FEMA had doled out nearly $63 million in individual assistance.

That doesn't impress Tabb, who says her insurance carrier has failed to cover all her damages.

FEMA is "mixing up bad people with people who really need assistance," she says. "They're treating you like you're trying to beat them."