Sarcu, 89, was rushed to the hospital and soon told his daughter that he was not comfortable returning to the condo where he lived alone. 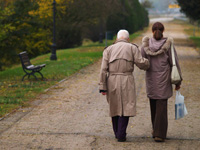 So Merens, 55, worked quickly to secure a one-bedroom apartment at the Park at Golf Mill, a nearby assisted living facility for which she paid $2,400 for the first month's rent and half of the facility's $2,000 community fee.

But Sarcu never would see the new apartment. His health teetered for months before he died Dec. 19, 2010.

All the while, Merens had paid for her father's unit in anticipation of his recovery. But when she called the facility the next day to inform them of her dad's death, Merens was in for a shock.

Staff at the Park at Golf Mill told Merens she would owe rent for an additional 30 days, under the terms of their contract, even though her father had never moved in. Moreover, they said, she still owed the $1,000 balance on the community fee.

Merens protested, arguing that her father never even saw the apartment, much less had an opportunity to eat any meals at the facility or partake in the activities he paid for.

But the staff told her to pay the additional rent, saying that the company's legal team would be sure to pursue the matter. Feeling overwhelmed, Merens complied, bringing the total she paid to the facility to nearly $7,000.

Still, she couldn't shake the thought that she'd been cheated.

"The more I thought about it, I was getting very angry," she says. "I was grieving the loss of my father and they were trying to intimidate me because their legal department was going to swallow me alive."

So Merens took action, writing to the Chicago Tribune about the ordeal. Once the newspaper contacted Horizon Bay Retirement Living, which manages the Park at Golf Mill, a different story emerged.

A representative called Merens to apologize and, at Merens' request, issued a refund for everything but the first month's rent.

"This is a very unique situation," says Claire Catanach, a spokeswoman for Horizon Bay, who indicated that no one at the company could recall another case like Merens'. "Our goal is to treat our residents and their families with respect."

The resolution left Merens feeling vindicated, but not completely whole, she says.

"It's just not right to treat anybody like that," she says. "I try to avoid going by [the facility] because it just brings back bad memories."