Nick Acocella of Hoboken, N.J., still fumes about the $95 minimum service call fee he had to pay when his air conditioner wouldn’t work. “The guy came over, hit the reset button and handed me the bill. I didn't even know there was a reset button.” The same goes for Sharon Waldrop of Crawford, Ga. “I once had to pay $60 for a service call when my clothes dryer wouldn’t turn on,” she says. “The technician came over and found it wasn’t plugged in.”

Well, guess what? Appliance repair service operators don’t like making customers pay for fixes they can do themselves, either. While repair services set minimum fees to cover technicians’ hourly wages and other overhead expenses, they know that they’re not building goodwill or loyalty when customers think that they’ve had to pay an unnecessary service fee.

So the next time one of your home appliances goes on the fritz, consider the following tips on things to check and fixes you can make yourself before picking up the phone. 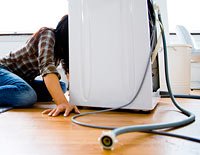 Even if you decide to call a repair service to diagnose an appliance problem, consult a website such as RepairClinic.com or AppliancePartsPros.com, where you can read about symptoms and likely causes of common problems in the popular brands of most major appliances. Also share your experiences and get valuable tips by looking in on the Household Tips community group.

If your refrigerator cycles on and off frequently:

If your refrigerator is a newer model that runs about 90 percent of the time, you might think it’s costing more to operate than the older unit it replaced. It isn’t. New models use modulating compressors, which cycle on and off more often than older designs. Even though the motor stays on more, it runs at a much lower power level than at start-up. The compressor operation is regulated according to the internal temperature, which is based on the number of times the door is opened, room temperature, amount of food stored inside and other factors. So, again, new refrigerators cycle more frequently, but their operating costs are roughly 25 percent of similar sized models built more than 20 years ago.

If your refrigerator isn't cold enough:

If you don’t hear the motor go on periodically, turn the thermostat up to the next higher setting. If the motor comes on, let it run for 24 hours before checking the temperature again.

Make sure nothing is blocking the airflow outside the refrigerator (at the top, underneath, behind, beside, at the front). Allow 3 inches of clearance all the way around.

If the condenser coils are mounted at the rear of the box, make sure that the back of the refrigerator stands several inches from the wall and that nothing at the top or rear is blocking the heat from radiating off the coils.

If the coils are underneath the refrigerator, carefully clean them with a vacuum cleaner (or commercially available brushes made especially for the purpose). Clean coils thoroughly at least twice a year.

Wipe off the face of the rubber door gasket with a clean, wet rag.

Make sure the interior shelves, drawers and food are not preventing the door from closing tightly.

If your dishes aren’t getting clean:

If the unit is leaking:

Operating Tip — If your dishwasher develops a film or brownish stains on the inside, put six to seven drops (no more) of good-quality, name-brand liquid detergent (the type used for hand washing dishes in a sink) in the bottom. Run the empty machine through a regular cycle. This will wash away soap scum, mineral deposits and grit. It will also allow the machine to work better.

If your clothes don’t dry thoroughly:

Operating Tip — If you are painting or refinishing wood products in your house or apartment, don't be surprised if the clothes that come out of your dryer smell of paint and solvent. Often, odors in the air are imparted to clothes in the dryer. Open windows to air out the house. Give it a little time and then launder the clothes again. The problem should go away within several days.

If your central air conditioners or window unit won’t turn on:

If your central air conditioner continues to cycle on and off after the outdoor air has cooled at the end of a hot day:

If the dehumifier ices up:

If you hear no sound when you activate the disposer On switch:

If you hear humming but no grinding noise when you activate the On switch:

William J. Lynott is co-author of the award-winning book, Money: How to Make the Most of What You’ve Got. Dean Landers is past president of United Servicers Association, an appliance industry trade group, and the owner of Landers Appliance in Baltimore.