Sheldon and Kelly Bulgatz have successfully launched four children, but still have three more — ages 9, 13 and 17 — at home.

The Kitchen: From Easy to Sophisticated

Nuts & Bolts: With four kids off to college or beyond, and three more growing up fast, Kelly, 52 (a CPA), and Sheldon, 65 ( he works in the direct mail business), know it won’t be long before teen swim parties and late-night homework sessions give way to — whoa! — quiet days and nights together at home. The large eat-in kitchen served a Bulgatz army for 17 years. But with a bit more financial freedom and the at-home children (17, 13 and 9) gaining independence, it’s time to upgrade the vibe from chicken fingers to chardonnay. “We’re looking down the road past ‘Hey, Mom. Hey, Dad. What’s for dinner?’” Kelly says.

Room for Improvement: In your 50s, you may be thinking ahead to possible retirement and spending more time around the house, so gear your redesign to a comfortable living space that can be functional for years. As Sheldon explains, the idea is to transition from a kitchen that’s been “a dumping ground for every stray kid in the neighborhood, which we loved” to something “more clean and uncluttered, where Kelly and I can have our own friends over and, you know, pretend to be adults.” Says Kelly: “It’s time for some grownup toys, like maybe a walk-in pantry and a cool built-in ice machine.” 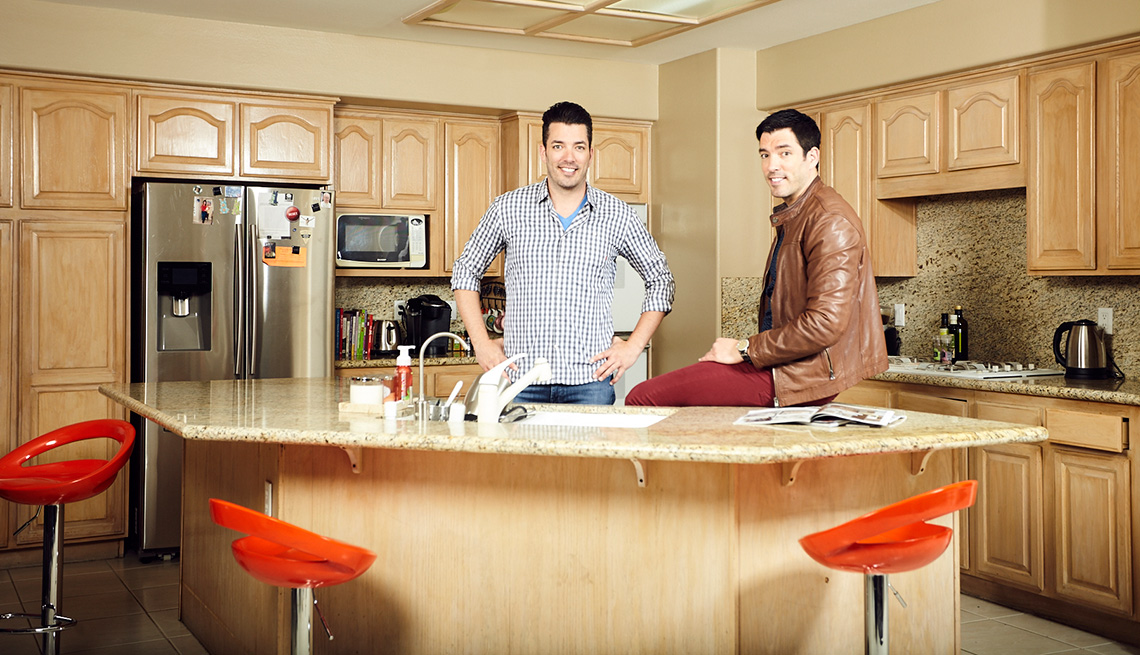 In this before photo, the Bulgatzes want to update the cabinets, go with wood-patterned flooring instead of tile and get rid of the orange stools.

Jonathan Scott walks into the house and smacks his forehead. “Oh, great,” he says, looking at five small glass-fronted wine refrigerators Kelly and Sheldon have hiding in plain sight. “Mom and Dad require one extra wine fridge for every kid they’ve had. You clearly need our help!”

Brother Drew isn’t worried: “Downsizing doesn’t mean downsizing your style or quality of life, so drink up,” he says. “As the nest empties and space opens up, you get opportunities to do whatever the heck you want.”

With room to breathe and a healthy budget, the Bulgatzes have the luxury of going for an ambitious kitchen remodel. Here’s what the Property Brothers recommend:

Kelly and Sheldon should be thinking about a redesign for life. “Visualize what you want your ideal home to look like, both with your kids and once they’re out,” Drew says. Then separate the must-haves from the optionals. Kelly lusts after marble and hardwoods and trendy gray-wash cabinets. But wood-patterned vinyl flooring, for example, can look great and save big.

Alas, that walk-in pantry Kelly longs for would require breaking a wall and pulling construction permits, doubling costs and problems. Instead, Drew and Jonathan suggest replacing the shabby old kitchen cabinets with new ones that go to the ceiling. “That adds space, saves Benjamins and averts the permit headache,” Jonathan says.

“At this age, you want to reduce the agita everywhere you can.”

The Bulgatzes are still in their prime, but “major renovations after 50 should always consider the what-ifs,” says Drew. What if you won’t want to sit on high stools or that trendy low-slung sofa a decade from now? “For older homeowners, we recommend counters at regular height instead of bar height, and lounging spaces and seating options with higher profiles so it’s easier to sit and stand,” he says.

It’s OK to splurge a little as payback for decades of hard work. But don’t spend your nest egg. Though the Bulgatzes would love gleaming top-line appliances by Wolf or Sub-Zero, it’s better to save thousands by instead going with a great-looking professional-grade series (typically the line with all the stainless steel) from a warehouse club or big-box store. 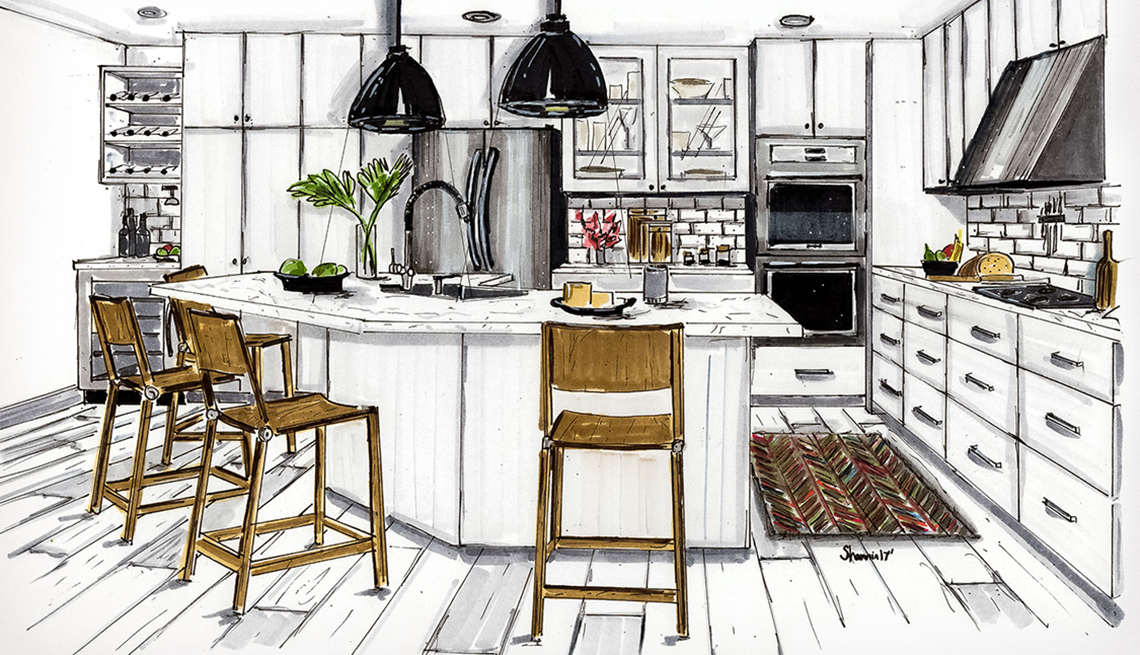 In this after design, Drew recommended counters at regular height instead of bar height, and seating options with higher profiles so it’s easier to sit and stand.