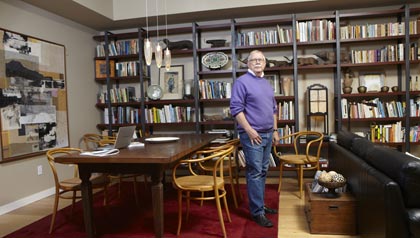 Rudolph Barton, 64, and his wife, Rhonda, downsized from a large house to a condo in downtown Portland. Barton, an architecture professor, designed the bookcase, which his students built.

Rhonda and Rudolph Barton downsized two years ago, trading a vintage 1907 bungalow — their home for 35 years — for a condo.

They swapped the leafy hills of southwest Portland for high-density living downtown, giving up more than one-third of the living space of their 3,000-square-foot house.

But they've never looked back.

The condo is secure, convenient and free of lawn care. The Bartons walk to work, restaurants and stores. When they travel, they lock up and leave.

Although no statistics exist on the number of older people downsizing in the Portland metro area, anecdotal evidence suggests the Bartons are not alone.

An Oct. 26 conference in Portland, "Build Small/Live Large," aims to cater to this demographic by encouraging contractors to build smaller, more affordable homes.

The conference will cover big issues and small details.

The overarching focus, said Jerry Cohen, AARP Oregon state director, is: "How do we make better use of what we have?"

"They want low maintenance and walkability," she said. "They're looking for easy care and flexibility. They're also looking for a sense of community."

These preferences are creating a demand for small, less expensive homes that are close to public transportation, shops, entertainment and cultural activities.

Their numbers are growing, according to the U.S. Census Bureau.

In 2000, there were more than 150,000 people 65 and older in Multnomah, Clackamas and Washington counties. A decade later, that demographic jumped to nearly 182,000 people. Twenty years from now, the Portland area's 65-plus population is expected to more than double, according to a study by PSU's Institute on Aging.

The institute has been working with AARP Oregon to push the city to prepare. As part of that effort, Portland was the first U.S. city to join the World Health Organization's age-friendly cities project in 2006, Cohen said. The following year, the institute published a report identifying age-friendly barriers in Portland.

Next: Barriers to building small. »

A key finding, said director Margaret Neal, is that Portland does not have enough affordable and accessible housing to meet the demand of older people.

Earlier this year, the City Council adopted the Portland Plan, which lays out the city's vision for the next 25 years. It acknowledges the need for more housing options for older people.

But space is at a premium in the Portland area, where sprawl is controlled by zoning laws.

As a result, contractors try to maximize profits by building up, creating two- or three-story houses that are not always a good fit for older people who have difficulty with stairs, said contractor Eli Spevak, owner of the building firm Orange Splot and a sponsor of the conference.

He said the city could encourage smaller, single-story homes by charging less in building fees for smaller homes.

"There are a lot of incentives for home builders to build big homes on a single-family lot," Spevak said. "There are fixed costs to purchasing the land. You're paying the same impact fees [for sewer lines, roads, parks and other infrastructure elements] whether you're building a 1,000-square-foot house or a 5,000-square-foot home."

City planners, mortgage brokers, architects and speakers from AARP Oregon will attend the conference on the PSU campus. The public is invited. Registration costs $95. Visit the Cascadia Green Building Council to sign up.

Lynne Terry is a writer living in Portland, Ore.