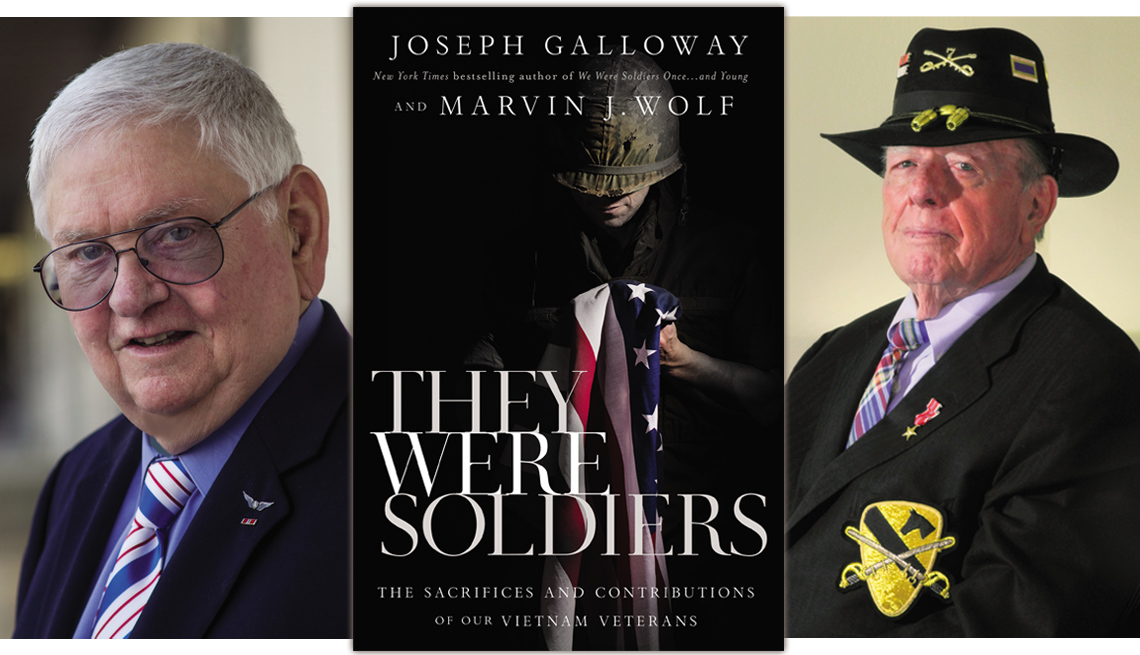 Many of the 2.7 million Americans who served in the Vietnam War returned to a divided country in great political turmoil. A new book, They Were Soldiers: The Sacrifices and Contributions of Our Vietnam Veterans, tells the stories of 48 male and female military members who served during those turbulent times.

The authors are Vietnam veterans themselves: Joseph Galloway, New York Times coauthor of the best seller We Were Soliders: Once … and Young (1992), and photojournalist Marvin Wolf. The pair chose to focus their work on the sacrifices and contributions that these veterans made after the war — as artists, healers, government workers and more. In the process, Galloway says, they found that “often the story of what good that veteran has done for his or her community and our country is more important than the war stories.”

The excerpt below highlights the story of Diane Carlson Evans, an Army nurse who returned from Vietnam with a severe case of PTSD and struggled as she became a mother and wife. Her frustrations with the lack of female representation at the Vietnam Veterans Memorial in Washington, D.C., ignited the campaign to create the Vietnam Women's Memorial.

Diane Carlson Evans was twenty-one when she arrived in Vietnam on July 30, 1968.

"I felt like I was ready,” she recalled. “I had good training. I was ready to practice nursing. I wasn't afraid to develop the skills to start IVs, hang blood, take care of chest tubes, put down nasogastric tubes, and take care of patients on ventilators with tracheotomies — observing and caring for all kinds of patients. But I wasn't prepared for the sheer numbers. For so many men my own age suffering and dying.

"It didn't take long for me to start asking questions,” she continued. “Why are we here? What's our mission? What is the purpose of this? All these young men — who are they dying for? We heard their stories. Take a certain hill and then weeks later go back and take it again. And retake it again a month after that. Is that why we're there? To take hills? No. It was about body counts. For the senior officers, the government, the leadership, it was always about the body count.

In 1969, Diane requested a transfer from the Thirty-Sixth Evacuation Hospital in the pleasant seaside city of Vung Tau. “I wanted to be closer to the fighting,” she explained. She was sent to dusty, fly-blown Pleiku, in the Central Highlands, near the Cambodian border. That March, she remembered, “We were hit hard. We were getting 400 casualties at a time, and so many came out of Cambodia. And yet the U.S. government was telling the people of America that we were not in Cambodia. It was very frustrating to know that these truths were not being told to the American people."

Diane returned from Vietnam in August 1969, the year after the assassinations of Martin Luther King Jr. and Robert Kennedy and near the zenith of the antiwar protests. “Flags were burned and buildings bombed,” she recalled. “Such a violent time. America was in terrible turmoil. I could see why people were angry at the politicians for their lies. I was angry too. But how could they be angry at us? At the people who served? We did just as our parents did during World War II and Korea and all of our wars. Isn't that what we were supposed to do? How could they take their anger out on us?"

Diane was also angry. “I wanted to know the whole truth about the war. Why were we killing Vietnamese civilians? I cared for hundreds of injured civilians, and so, so many children who were shot or burned. I can't ever forget them. I wanted to know why. What did we accomplish? What was our mission? How could our country now treat our young men so terribly, men who had suffered and died, and yet they were so, so brave, as brave as any soldier in any war. Why was our country turning its back on them?

"At first, I agonized over how our boys were treated, how their needs were ignored, how their courage and sacrifice were forgotten. And the tens of thousands who had been killed. But then, quite soon, I realized our leaders had turned their backs on us women, too, the thousands of American women who volunteered to go to war. I was just furious and so very disappointed in my country."

Diane served her last four years on active duty at Brooke Army Hospital in San Antonio. There she met Michael Evans, an army surgeon, whom she married. She left the army as a captain in 1973 and found work in a civilian hospital. As the years flew by she gave birth to four children. She concentrated on her work and on raising her children.

But she could not forget Vietnam. Year by year, her sadness and anger grew.

"Like many veterans, I didn't talk about the war. The few times I did, I was humiliated. Someone would say, ‘Why did you go there in the first place?’ and I'd leave the room. I just couldn't deal with responding to insults. I shut down. I didn't stand up for myself or anybody else. I told my husband that I didn't want to talk about it and that he should never tell anybody I was in Vietnam, because when he did, it always ended badly.

"I didn't even know how many of us had been killed until the dedication of the Vietnam Wall in 1982, when they came out with the figures,” she recalled. “More than 58,000 lost their lives. But the hundreds of thousands who were wounded were rarely mentioned. I was at times almost overcome with sadness. And then the betrayal — betrayal is the worst feeling a soldier can have. We had to come home and know that what we did was right, that what we did was good. As nurses, we all knew we saved lives. But thinking about what our men were asked to do, there had to be at the very least a sense that we had served for the right reasons, that we had accomplished something important, that we had contributed to our nation in some way that was tangible. Isn't that why we served? For freedom and liberty and all the things we were taught in school and what our flag stands for? When we took the oath, it was to support and defend the Constitution. What act is greater than that?