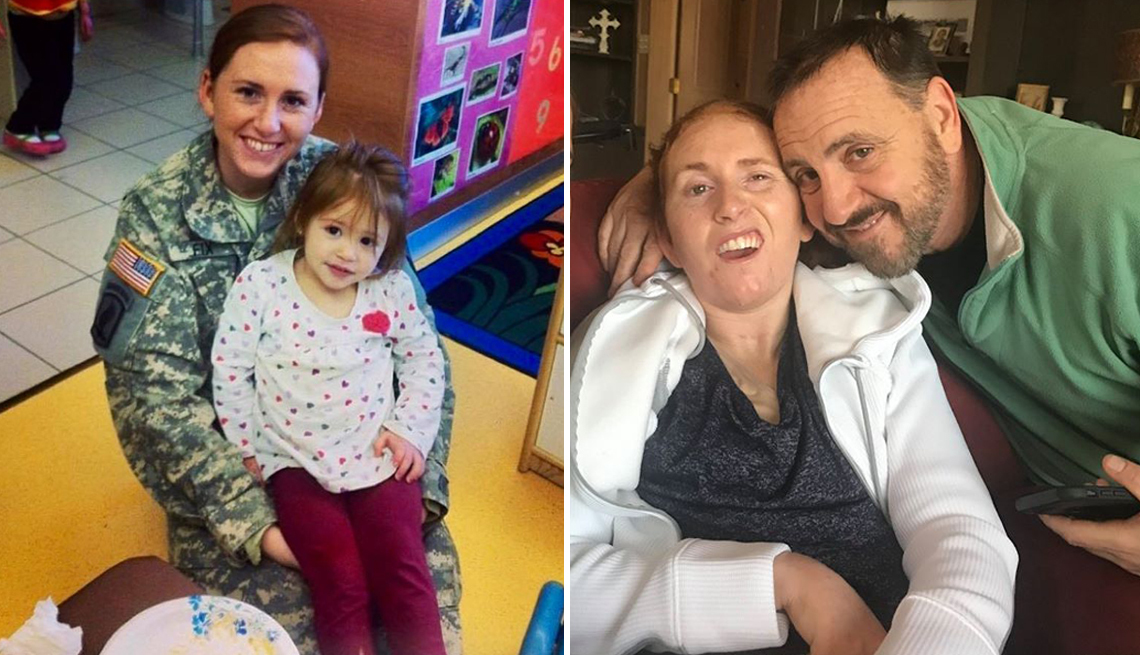 Kimmy Fix holds her daughter before her injury and is seen after with her father.

Military caregivers experience higher risks of poor health, strained family relationships and greater financial loss than nonmilitary caregivers. For the 5.5 million caregivers in the U.S. helping military members and veterans, the coronavirus pandemic has exacerbated the stress, according to RAND, a nonprofit think tank.

"If you're caregiving, you're almost always caregiving for somebody who's a higher-risk individual. If you're using other caregivers, that's another point of tension,” says Jim White, 57, caregiver for his daughter, Kimmy Fix, 31. “They're afraid of bringing something in, they're afraid of others working with Kimmy, who might expose them to something."

Fix, White's oldest child of nine, was in an auto accident while stationed with the Army in Italy as a Medical Service Corps officer and suffered a traumatic brain injury. She was in a coma for many months, and six years later she remains unable to speak and limited to her bed and wheelchair in Apex, North Carolina.

"We weren't convinced we would be able to provide care at home,” White said. “Actually, one of the nurses at the Richmond Polytrauma Center said ‘You can do this and you can take her home. There's a way to do this.’ And so, we're really glad we did.”

However, the pandemic has placed extra burdens on Fix's around-the-clock caregivers. She is prone to pneumonia, a complication that can stem from the coronavirus, and many of her caregivers have underlying conditions, putting them at risk of severe complications if infected.

"Kimmy actually did get pneumonia. She just came back from the hospital a couple of weeks ago. It was not related to COVID, but she went into a hospital that had COVID in it,” White said.

Instead of being put in the ICU, where she has been during previous bouts of pneumonia, she was placed on a regular floor.

"There were rules that nobody could be in the hospital with her because she's an adult. She couldn't have any visitors,” he said. “My wife was able to kind of talk them into following the pediatric policy, which allowed you to have one person with you."

Since they weren't allowed to trade off at Fix's bedside, Karee White, Jim's wife, was the only person who was able to remain with her.

"In the past, when she's been in the hospital, we even have had our caregivers go in there, spend the night with her to kind of relieve the nursing staff and give Kimmy somebody that's familiar with her,” Jim White said.

Fix's feeding tubes can be unfamiliar to some nurses, especially on the pediatric floor.

Another aspect to consider is finanaces. “I say this all the time — if Kimmy wasn't in the Army, we'd be bankrupt,” says White, acknowledging her Veterans Affairs coverage from being permanently disabled, Medicare and a Tricare extension.

Caregivers on a mission

Dole Caregiver Fellows are active military and veteran caregivers from across the country who are selected to represent the Elizabeth Dole Foundation. Each class has approximately 25 to 30 fellows who serve a two-year term before transitioning into the organization's alumni association. During their term, fellows provide support and advocate for other caregivers at the community and national level. White is among the new crop of Dole Caregiver Fellows; Karee White is a former fellow who is now part of the alumni association.

"One of the things that we've discovered is that the more time we spend with her, the more we realize she is still there. It's just hard to unwrap because of the communication. After being home a year or two, we realized she can read, she has memories."

When Fix returned home with her injury, the Whites, both military veterans, had to determine their daughter's daily living and nursing requirements. At first a contracted agency was utilized, but care was inconsistent and the Whites were unable to direct how care was administered.

White realized he needed to devote more attention to his family's needs and left his role as vice president of health care marketing at a telecommunications company to work as a self-employed consultant.

Enrolling in the Veteran Directed Care Program was a “big turning point for us,” White said. “We have a really, really good team right now; it's sustainable."

The program, previously known as Veteran-Directed Home and Community Based Services, provides long-term service that allows veterans to live at home and engage in community life.

"The program was funded by Congress, but it's kind of up to each VISN [Veteran Integrated Service Network] to implement the program. We're the only people in North Carolina in the Veteran Directed Care Program right now,” said White, who was recently inducted as a Dole Caregiver Fellow. He hopes to use his platform to spread awareness of the program's benefits.

"At the end of the day, the money comes from somewhere. I personally believe it is less expensive to have someone at home than to put them into an institutionalized setting,” he said.

Even with a regimented care program that allows his daughter to be at home, other difficulties remain.

"One is the impact on the siblings,” White said. “Somebody gets pulled out of the normal stream."

He said Fix's needs created more responsibilities within the household, which had an impact on individual family members. Providing awareness of and advocacy for siblings who are affected is another passion that White plans to work toward as a fellow.

Raising such a large family while caring for a member with a diminished mental state has provided additional perspective. Fix has a daughter who is 8 years old. White's youngest daughter is a year older than his granddaughter. So, while Fix was hospitalized in Italy, the 4-year-old niece and 5-year-old aunt kept each other company. After Fix's accident, her husband filed for divorce, putting her in a weak legal position with regard to custody.

"There's nothing fair about that,” White said. “We raised our granddaughter for a year when her parents were both in Afghanistan together. So, we feel like a family unit. We can give her everything she needs."

White wants to advocate for people who have lost their legal rights because of traumatic brain injuries.

"One of the things that we've discovered is that the more time we spend with her, the more we realize she is still there,” he said. “It's just hard to unwrap because of the communication. After being home a year or two, we realized she can read, she has memories."

White continued, “The thing that keeps us going is our mission to help reveal more and more of Kimmy and help her see that we see that. And recognize her personhood and give her as much dominion as we can possibly give her."

Watch Fix's story from the caregiving perspective of her mother. She has since handed the Elizabeth Dole Foundation Caregiver Fellowship baton to her husband and joined its alumni association.