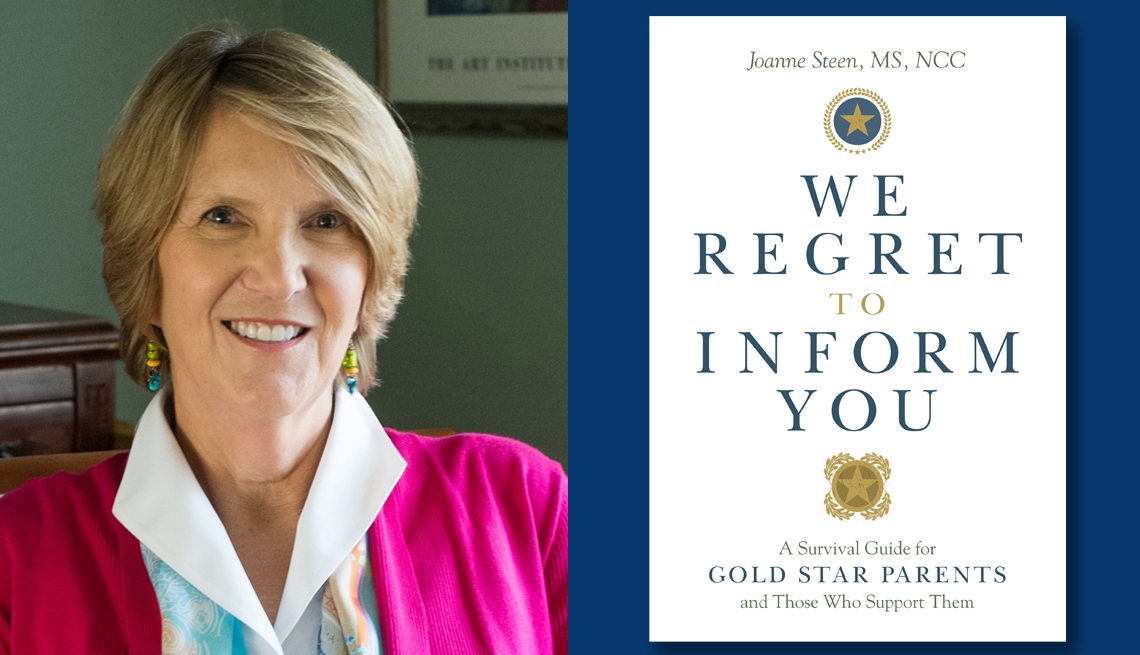 After coauthoring her first book, Military Widow: A Survival Guide, in 2006, Joanne Steen was approached by a ‘Gold Star’ parent — a term given to the immediate family members of someone who died while serving in the armed forces — and asked when she would write a book for her.

The question launched Steen on a five-year mission of researching and writing her new book, We Regret to Inform You, a survival guide for Gold Star parents and those who support them, out this month.

Grief is a feeling all too familiar to Steen since the loss of her husband, Navy Lt. Ken Steen in 1992.

"At the time I had it all. I had a good marriage to a Navy pilot. I had a very exciting career in a technical field. We were moving, planning kids — all that changed very tragically, very traumatically, with an explosion of a helicopter and the loss of a crew of seven,” Steen says.

Several years after her husband's death, Steen left her 20-year career in engineering and went back to school for a master's degree in counseling. She was 40 years old. She became an instructor in the area of casualty response, assistance and grief training. At the same time she conducted outreach to Gold Star families.

"There is really a void in grief literature on military loss,” Steen says. “I was able to use some of the most current research and theory that is available on grief and traumatic loss. But, what I was able to do with that was to infuse it within the culture of the military, which I understand quite well."

Steen wrote We Regret to Inform You for two audiences: the parents of children killed in the line of duty and the families, friends and providers who care for them.

"This is a resource that can help [parents] sort through the emotional wreckage, provide them with a path to survive, cope and then to move forward in their loss. Military grief is a much different phenomenon than a civilian type of loss,” Steen says.

Excerpt from We Regret to Inform You, from Central Recovery Press on Memorial Day:

"I learned that my son Alonso had been killed while I was in the parking lot of a home improvement store. I had just pulled into a parking space when one of his high school buddies texted me how sorry he was to hear the news. I didn't know what he was talking about, so I called my wife. Apparently, it was all over social media about a serious mishap in Al's squadron.

Those first posts weren't good. Bad news travels fast, I guess. Around suppertime, the Air Force came to our door. At first, I wanted to believe they were coming to tell us that Al was okay, but that wasn't the case. He was one of nine squadron members who were killed. The casualty team didn't have too much to tell us about what had happened, though. That part of the bad news didn't travel fast.

Later that night, I sat alone in the dark, feeling utterly helpless. The Air Force just notified us that our son was dead. I told them I wanted to go to where Alonso was killed and help out. But they said they had skilled personnel for just this purpose and everything was under control. They assured my wife and me that our son's remains would be coming home soon.

I told them they didn't understand — a boy always needs his dad when times are bad.

Grief experts agree: there is no greater loss than the death of a child, regardless of whether the child is an infant, a teenager or an adult in uniform. The extraordinary bonds between a parent and a child create a relationship unlike any other. Powerful physical and emotional bonds, strong social and behavioral bonds, and deep spiritual and intuitive bonds all fuse a parent to a child and, likewise, a child to a parent. There aren't enough words in the English language — or any language, for that matter — that can fully convey the scope of the parent-child bond or the depth of a parent's anguish over losing a child. For surviving parents, the agony of losing a son or daughter is unspeakably heartbreaking, often described as a fate worse than death. But you already know this from firsthand experience.

The death of your son or daughter violated the order of nature. Your child was not supposed to die before you. This isn't how you counted on life to work out. It was unnatural for your child to die first, and that makes the death harder to comprehend and eventually adjust to. You'll likely spend the rest of your life learning to live with the loss of your son or daughter. Most surviving parents do.

You were connected to your child in countless ways, many of which were obvious, while others you may not have realized yet. Each way you were connected represents a piece of your loss, much like the pieces of a jigsaw puzzle. In its box, the puzzle is in hundreds of little pieces, each just a fraction of the big picture. As these puzzle pieces are matched together, a bigger picture begins to emerge. It takes time, perseverance, and patience to figure out how all the pieces fit into the big picture. And so it is with the hundreds of losses that came from the death of your child."