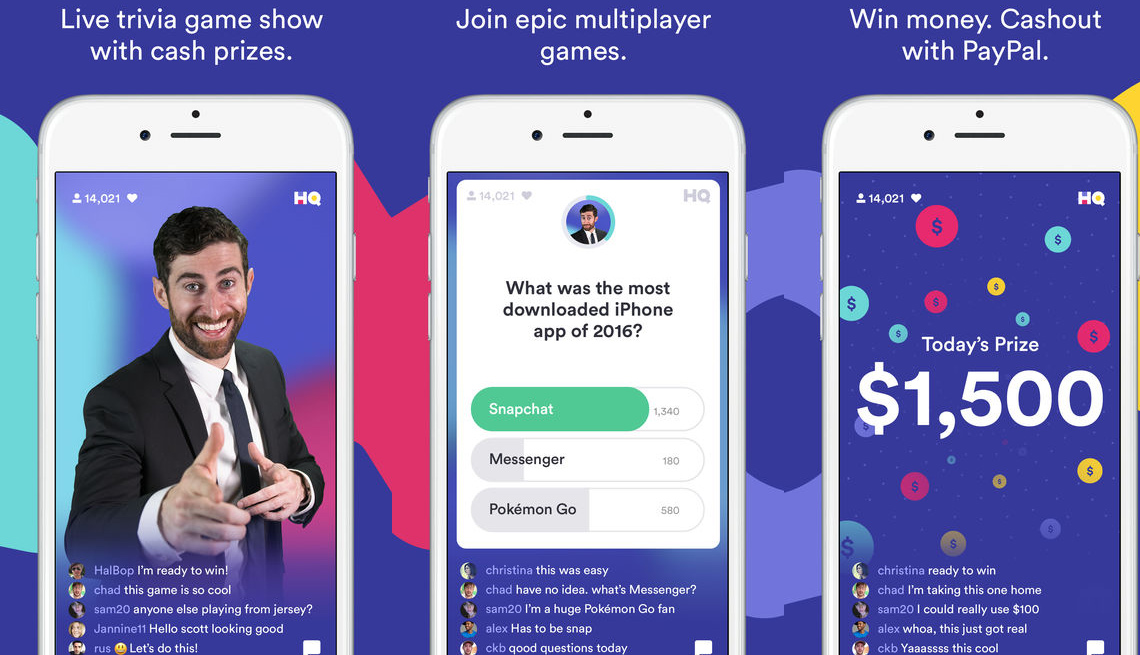 Q: How do you play trivia with a million people?

A: Easy. On the internet.

That's the draw behind HQ Trivia, a new internet game that since fall has grown to as many as a million players in a single game. It offers cash prizes of $2,000 for most games and five-figure prizes for its Sunday night games. HQ Trivia, which can be played on Apple and Android devices, has drawn a steady crowd since its launch, with games every day at 9 p.m. ET and on weekdays at 3 p.m. ET, too.

Players answer 12 questions, ranging from easy to hard, and have just 10 seconds to answer by tapping one of three possibilities. Games usually last around 15 minutes. Players are eliminated when they tap the wrong answer or fail to answer in time. After the 12 questions, the remaining contestants split a cash prize that they can transfer into their PayPal accounts. Though HQ Trivia’s wild popularity means that prize pools are usually chopped into pocket change — typically, there are a few dozen winners splitting a pot between $15 and $50 — the app is free, and the appeal may be the quick chance at winning real money.

Players can also acquire extra "lives" by having others sign up for the app with their referral codes. An extra "life" allows players to stay in the game when they miss answers to questions about the guinea pig's continent of origin or Arnold Schwarzenegger's debut role, for example. But only one use of an extra life is permitted per game. And while players could do a Google search to look for the answers, they would have to be quick on the draw to make it work during the 10-second window.

As noted in the New York Times, HQ Trivia has become the latest iteration of appointment viewing — a rarity in this on-demand Netflix age. And HQ Trivia’s popularity has held off a challenge from a copycat app called The Q, even though that app, with smaller participant pools, increases players’ chances to win a higher cut of a prize pool.

But that’s not to say HQ Trivia has gone without criticism. Angry players flood the Twitter mentions of @hqtrivia every time the app freezes or when there’s a controversial answer to a question — such as the time the plural of "octopus" was revealed to be "octopuses" and not "octopi" (a variant spelling), as the majority of contestants had thought.

HQ Trivia also faces questions about its long-term viability. The app does not currently run ads or feature sponsored questions, so all of its prize money comes from a well of venture capital. Right now, the strategy of the app’s two founders (Rus Yusupov and Colin Kroll, who also founded the social media video platform Vine) seems to be growing the audience to as large a number as possible. According to Money, HQ Trivia's founders have raised $8 million as of Dec. 8 and were in the process of asking venture capitalists to value it between $80 million and $100 million.

Yet, while HQ Trivia continues to figure it out on the business side, the app currently sits as the third most popular game in Apple’s App Store, regularly drawing around 700,000 players for its nighttime games.