The mercury is flirting with 100 degrees on a Thursday afternoon in New York. The humidity makes it feel even worse. But inside the air-conditioned Benjamin Rosenthal Senior Center operated by Selfhelp Community Services, about a dozen seniors are queued up to go virtual bowling on a Microsoft Xbox Kinect system on a big screen television set amid card and Mahjong tables. This is one of several efforts by Selfhelp to partner with Microsoft to bring new technology to seniors, whether at a center like this one, or through efforts at a new “Virtual Senior Center” aimed at connecting seniors who are homebound.

See also: Use of online communication growing among 65-plus.

Three thousand miles away, at Microsoft’s campus in Redmond, Wash., the company has a demonstration area to show how it is dealing with accessibility. That may be for seniors challenged by limited motor skills or cognitive impairments. Or it might be for those who are visually or hearing disabled. These days the team, led by Microsoft's chief accessibility officer Rob Sinclair, is particularly busy, working to ensure that its newest operating system, Windows 8, is the most accessible the company has ever created. 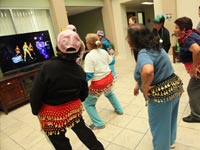 Seniors practice belly dancing while playing with the Kinect Xbox.

Windows 8, with its so-called Metro style interface, is a dramatic change from the traditional desktop icons that most of us have become accustomed to in Windows XP, Windows Vista and Windows 7. The new interface more closely resembles the Windows Phone software, with customizable tiles for the things you use frequently, whether that’s programs, websites, applications or content, such as music or videos. The new operating system offers improvements in terms of accessibility with significant enhancement of both Microsoft Magnifier and Microsoft Narrator.

The new Narrator will take advantage of the touch capabilities of Windows 8. Move your finger (or your cursor) over an area on the screen and Narrator will tell you what’s there. It will also allow you to initiate actions, and will be far more helpful in reading materials on a website than previous versions. The new version of Magnifier appears to be far easier to use, and, frankly, far less annoying. You’ll be able to use touch to quickly zoom in on text. You can maneuver Magnifier from the edge of the screen so your fingers don’t block what you’re trying to read. And if you’re not sure where you are in the new Windows universe, you can easily jump to a full screen, then maneuver the Magnifier rectangle wherever you want to go.

But having all these accessibility features doesn’t mean much if they’re not easy for the end user to find. Rob Sinclair admits that discovery has been a significant impediment. He tells the story of a woman whose eyesight was declining and out of frustration she quit her job because she was unable to read her computer screen. Only later did she find out that Windows had a magnifier function. No one had told her. To prevent this from happening, Sinclair says his team is putting major emphasis on the Windows Ease of Access Center. It will be easily visible on the Windows 8 home page. Instead of asking the user which features to initiate, the center asks a series of questions such as, “Do you have difficulty seeing the screen?” ”Do you have difficulty making out speech if several people are talking at once?” The questions are designed to drive users to the features they need to be using, even if they don’t know them by name.

Sinclair says the accessibility effort has evolved over the past seven years, “This effort here began with people with disabilities, severe disabilities. We added the features into our platform around mild disabilities as well … What we realized is that there’s a huge change in demographics, the global aging population. So what we’ve now done is to combine aging together with disabilities in something we call the natural interface. What it all boils down to is that each person needs an individual computing experience. It could be because of disabilities or work style or preferences.”

Sinclair says the journey toward broader accessibility has been an iterative process: “At Microsoft our goal is to make each version of our technology more accessible than the last by embracing a development philosophy called Inclusive Innovation. This philosophy includes not just the development of built-in product features like magnification, text-to-speech, voice recognition and personalization features, but also looks to address ways to make it easier for third-party software and hardware manufacturers to create highly specialized accessibility products.”

But not everything works together. Like many major companies there are a lot of people involved in the development process and sometimes they don’t all get the message. A simple example, the product activation code on a copy of Microsoft Office was so small I had trouble making it out with a magnifying glass. Microsoft says if that happens customers can contact product support to work around the issue.

In Windows 8 and beyond Microsoft says it intends to take many of the features from its Xbox gaming system, the gesture recognition of its Kinect System and the live content tiles from Windows Phone and bring them all together. Eventually users will be able to interact with a device, be it a desktop computer, laptop, tablet or television using the methods they are most comfortable with. That may be keyboard, mouse, voice recognition or even gestures. For boomers and seniors this means that eyesight, hearing or dexterity need no longer be impediments to using your computer. And for boomers who want to stay in the workforce longer, it means fewer obstacles to maintaining productivity.

In October 2011, Microsoft purchased Skype for $8.5 billion. The global video-calling service has become a huge hit among seniors, allowing them to see and hear family and friends no matter where they are. Using Skype on a tablet such as iPad means Grandma or Grandpa no longer needs to make an appointment to either be in front of a computer or television at an arranged time. But Skype has yet to add features such as simple menus or photo button calling that would make it even more attractive to seniors.

According to Sravanthi Agrawal, the London-based head of communications for Skype, the company is only now starting to integrate with the rest of Microsoft, so it may be a while before Microsoft’s accessibility goals are integrated with Skype. At the same time she says that because of Skype’s limited staff, the company has concentrated on improving services for the broad market and has not yet been able to look at creating an interface specifically for seniors. That’s created an opening for some third parties, including Selfhelp and Connected Living, who have built their own senior friendly overlays to operate with Skype.

Microsoft sees Kinect as a big plus for seniors, since it allows them to stay fit and active without facing issues such as strength or fine motor skills. The same technology is already starting to show up in non-Microsoft devices like smart TVs. One day soon you’ll be able to gesture to your TV or computer as just another form of input and not just as a sign of frustration.

Note: “See Me, Hear Me” is a continuing series examining whether major players in the consumer electronics industry are meeting the needs of boomers and seniors.