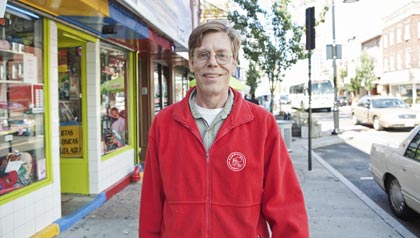 Hal Laessig, a resident of Newark's Ironbound section, says the area would be safer with improved sidewalks, crosswalks and street lights. A "complete streets" policy considers all users, not just drivers.

Walking is a way of life for Hal Laessig, who works and lives in the Ironbound, a crowded enclave near downtown Newark.

The streets of the neighborhood, which is within walking distance of Penn Station and the Prudential Center arena, are filled with rush-hour traffic, and the sidewalks are thick with pedestrians.

See also: What is a complete street?

But the sidewalks are narrow and broken in places, many crosswalks are not clearly marked, streetlights are dim at night, and drivers don't always stop for pedestrians, said Laessig, 56, an architectural project manager.

The city of Newark, urged by a coalition spearheaded by AARP New Jersey, is taking steps to make its roads and sidewalks safer for pedestrians, bicyclists, bus riders, people with disabilities and parents pushing strollers — as well as for motorists.

Called "complete streets," the policy requires transportation planners to take into account all users during street construction and renovation projects.

A proposed update of Newark's master plan — the blueprint for future development — includes a complete streets policy. The Newark City Council is expected to vote on it in November.

Keep all users in mind

"All it takes is foresight — to keep in mind that street and roadway design has to be focused on more than cars," said C. Brian McGuire, AARP New Jersey director of advocacy.

For instance, crosswalk signals set at a longer duration help older pedestrians or people using walkers and wheelchairs cross more safely. Curbs built to bulge out at crosswalks allow drivers and pedestrians to see each other more easily.

But even before complete streets becomes an official Newark policy, there's been some action: the creation this summer of the city's first bicycle lane. The lane, covered with a special green, high-friction surface, is on eight blocks of Washington Street.

"Creating bicycle lanes in our city makes us friendlier to bike riders, supports a cleaner environment and helps us continue to promote healthier lifestyles for our residents," Mayor Cory Booker (D) said in a statement issued by his office.

Six more bike lanes are planned throughout the city, representing a shift away from decades of car-focused transportation planning in New Jersey's largest city.

Booker said a complete streets approach is a priority for his administration so that Newark's streets "accommodate all users, including pedestrians, motorists and bikers."

The New Jersey Department of Transportation adopted a complete streets policy in December 2009 that applies to state- and federally funded roadways. The state urged cities and towns to adopt the policy for locally funded projects. Essex County and 26 municipalities have followed suit.

Essex County, which maintains 215 miles of county roads that cut across Newark and other towns, plans a major pedestrian-friendly redesign of Park Avenue and 4th Street in Newark's North Ward.

The intersection has been a source of public outcry over pedestrian safety. La Casa de Don Pedro, a nonprofit organization that provides health, housing, education and immigration services in Newark, sponsored community meetings and urged Essex County officials to upgrade traffic signals at Park and 4th.

Alle Ries, director of community and economic development at the organization, spearheaded the traffic safety campaign. She said the intersection has a New Jersey Transit light rail stop and busy bus stop but no walk lights, and the crosswalks are not clearly marked.

George Jordan is a writer living in Teaneck, N.J.

You may also like: How Texas is working on complete streets.