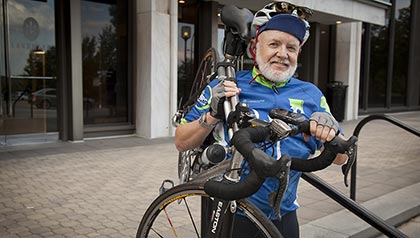 Greenville’s focus on "complete streets" makes it safer for cyclists like Carl Anderson, 61. Streets are designed for everyone, not just motorists.

Carl Anderson, M.D., rides his bike about four miles to work in downtown Greenville. Thanks to the city's focus on "complete streets," the 61-year-old semiretired physician can make most of that ride safely.

See also: The most dangerous cities for walking — and how to fix them

Complete streets is a nationwide initiative urging transportation planners at all levels of government to consider everyone, including pedestrians, cyclists and people with disabilities, when planning new roads or improving existing ones. AARP South Carolina is one of several groups in the state working to promote the policy.

As a cardiovascular surgeon, Anderson endorses exercise for people of all ages. Accessibility encourages exercise, something he notices as riders crowd Greenville's bike paths.

"Complete streets is an ideal way in which we support mobility for all users," said Erika Kirby, director of the state Division of Nutrition, Physical Activity and Obesity in the Department of Health and Environmental Control (DHEC). "We would like to see our communities designed to accommodate all modes of transportation."

Greenville has been a leader in adopting the concept — beginning with downtown renovations in the 1970s — even before there was a formal complete streets initiative.

"Streets are not only for cars, but for people as well," said Andrew Meeker, senior landscape architect for Greenville. The city's downtown draws people looking for a place to live that allows them to walk or cycle to work, shopping and entertainment.

Don Hudson, 56, and his wife, Elissa, moved to downtown Greenville four years ago and walk to most of the places they need to go.

"We can go two or three weeks without even getting in the car," he said.

Greenville doesn't limit its complete streets philosophy to downtown. It has worked with the state Department of Transportation to turn four-lane roads into two, with turn and bicycle lanes, during repaving projects.

"We have a strong emphasis on people and places, and finding a balance," Meeker said.

"There are many simple things you can do to make roads safer for older adults," Love said. "Have longer waiting times at intersections, better signage."

For older pedestrians, having a safe refuge in a median is important.

Some of these changes can be expensive, and some critics cite the cost as a reason not to implement complete streets policies.

But supporters contend many projects can be completed with little cost and argue that making areas pedestrian-friendly can reap economic benefits.

"It's about changing investments," said Rachael Bronson, former executive director of the Palmetto Cycling Coalition. "It can be simple to improve roadways, to make it safer to travel on for pedestrians and cyclists … as simple as narrowing roads and putting in bike lanes."

About a dozen cities or towns and five counties in South Carolina have adopted complete streets, but many are slow to implement initiatives, Love said.

Camden has a project due for completion in 2016 that will make the city's downtown area more pedestrian-friendly by diverting tractor-trailers to an alternate road around the downtown area and reducing a three-block section of the main street from four lanes to two, said Shawn Putnam, city planner.

"We need to promote increased physical activity," Putnam said. "We need to provide an environment where more people can walk and ride bikes safely."

Lack of activity is an issue for South Carolinians, where half the adults do not get enough exercise, according to a DHEC report. Nationally South Carolina ranks:

"People of all ages benefit from opportunities to engage in walking or biking," said Maureen Sevigny, of Sumter, a member of the board of directors of the Palmetto Cycling Coalition. Complete Streets "encourage people to leave their cars and engage in active transportation."

Lezlie Patterson is a writer living in Chapin, S.C.