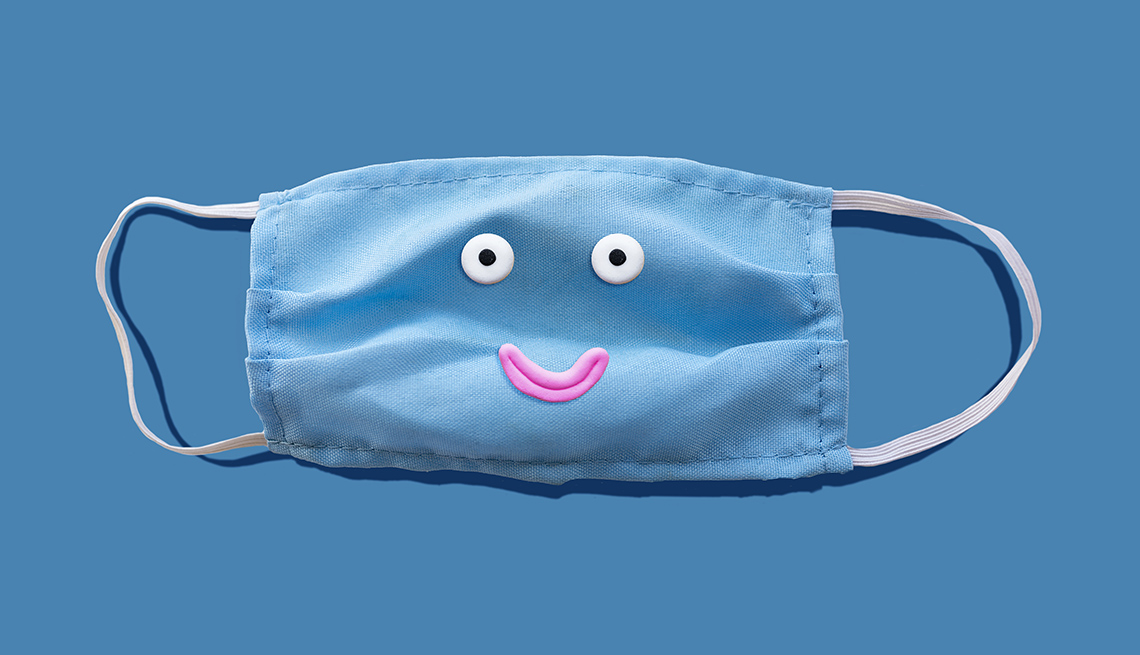 We used to convey joy with a grin, express sympathy with a downturned lip, invite people in with a welcoming smile and a flash of teeth. Now, we're wearing masks. With more than half of a face covered, communication is affected — whether we're aware of it or not.

"This is a really big shift because reading those facial expressions is so primally wired for us,” says Patti Wood, author of Snap: Making the Most of First Impressions, Body Language and Charisma. “It's a big barrier — much bigger than we realize.” So how can we show our sadness, glee or anger while still protecting ourselves and others from COVID-19?

Pam Holbrook, 65, a Gainesville, Florida, preschool teacher, wore a mask indoors this summer while caring for 3-year-olds during a five-week camp. It was challenging to connect with her students, but with some thought, she worked around the mask.

"You can do a lot with your hands,” Holbrook says. “I try to be aware of what my eyes are doing, and you need to overdo it with your voice.”

Holbrook says she also realized that pre-coronavirus she would often smile a hello at adults and not speak. Now she tells them what's going on under her mask. “I feel I need to say, ‘I'm smiling. Good morning,’ “ she says. “You don't want misunderstandings, so you need to do things like that."

Body language experts say that with a bit of deliberate effort and attention we can make sure our emotions come through — even with a mask. “I teach a lot about shoulders now,” says Alison Henderson, CEO of Moving Image Consulting, based in Chicago. Shoulder gestures will register in someone's eye view if they're looking at your face, she says.

Eyes are already very expressive, Henderson says, but she's advising people to over-emote and use their eyebrows. “I've been telling people to think about cartoon eyes, when the eyes bug out,” she says.

Dentist Bill Cranford, 65 says he makes sure front desk employees at his Rock Hill, South Carolina, practice present friendly demeanors and an expressive tone of voice now that they're wearing masks. For Cranford and his whole staff, it's important to put people at ease when they get dental work done.

"There's a lot that goes on in your voice quality and inflection and in your body language,” he says. Patients can sense — through the lines on the forehead or the wrinkles by the eyes — if a person is smiling under the mask, he says. “We tell our staff to smile, even though [patients] can't see their teeth."

Cranford says he wore a mask to examine patients even before the pandemic. But now he's in full personal protective equipment — a gown, two masks, goggles and a face shield. So he tries to use body language to alleviate patient stress. “I sit below eye level and it makes the patient feel that they're in charge,” he says. “I'm not going to stand up and tower over them."

Articulating specific emotions allows people to know what you're thinking and feeling without the guidance of your face, says Paul Greene, a psychologist and director of the Manhattan Center for Cognitive Behavioral Therapy. It's a helpful therapy technique independent of mask-wearing, he says. “Naming emotions can be part of improved communications for many people,” he says. “Identifying emotions in the first place is a psychologically healthy process."

Having mouths covered by masks means you can't read a person's lips as they talk. Even if you're not hard of hearing, lipreading plays a role in our understanding of conversation. “I didn't realize how much I relied on watching people's mouths,” Greene says.

Lisa Scott, a professor of psychology at the University of Florida who studies cognition and brain development, says humans depend in part on watching a person's mouth to process some language. Infants watch the mouth to learn about language and to distinguish sounds. She worries that babies being cared for by adults wearing masks could face language delays. “Covering up half the face is going to lead to communications difficulties across a variety of domains and ages,” she says.

To help, some mask-makers are producing face coverings with a clear plastic panel inserted over the mouth, especially for the deaf or those who need to read lips. In addition, some mask-makers will print smiles onto masks to convey happiness. You can even purchase a mask that has the bottom half of your own face printed on it.

Nurse Bernadine “Bernie” Gonzales, 50, who often works fully masked and gowned in the Pediatric Intensive Care Unit at Children's National Hospital in Washington, D.C., says she puts more thought into her tone of voice and the way she interacts with her patients. Even though many patients can't answer, she talks to them and asks questions.

"The most important thing is how you convey your voice, the way you touch them and care for them and the time you spend at the bedside,” she says. “They can feel it when you're smiling."

How to express yourself

Name your emotions. If you're feeling sad, upset or happy, give voice to those sentiments, Greene says. “People can't read it on your face now,” he says. “It's incumbent on us to describe how we feel."

Use body language. Waving, thumbs up, virtual hugs or clapping are all good ways to convey emotion, Wood says. She also recommends clasping your hands high on your chest to signal pleasure.

Use untapped resources. We don't often think about using the shoulders, the posture of the neck or the eyebrows to convey emotions, but they can transmit subtle signals about how we feel.

Smile under your mask. People can't see your smile, but they can see the raise of your cheeks and a little lift below your eyes. Plus, Wood says, smiling sends a message to your brain to release chemicals to give you a mood boost.

Focus on articulation. Without the ability to see lips during exchanges, it's important to speak clearly and articulate. Henderson encourages people to start the day with tongue twisters to warm up for conversation.