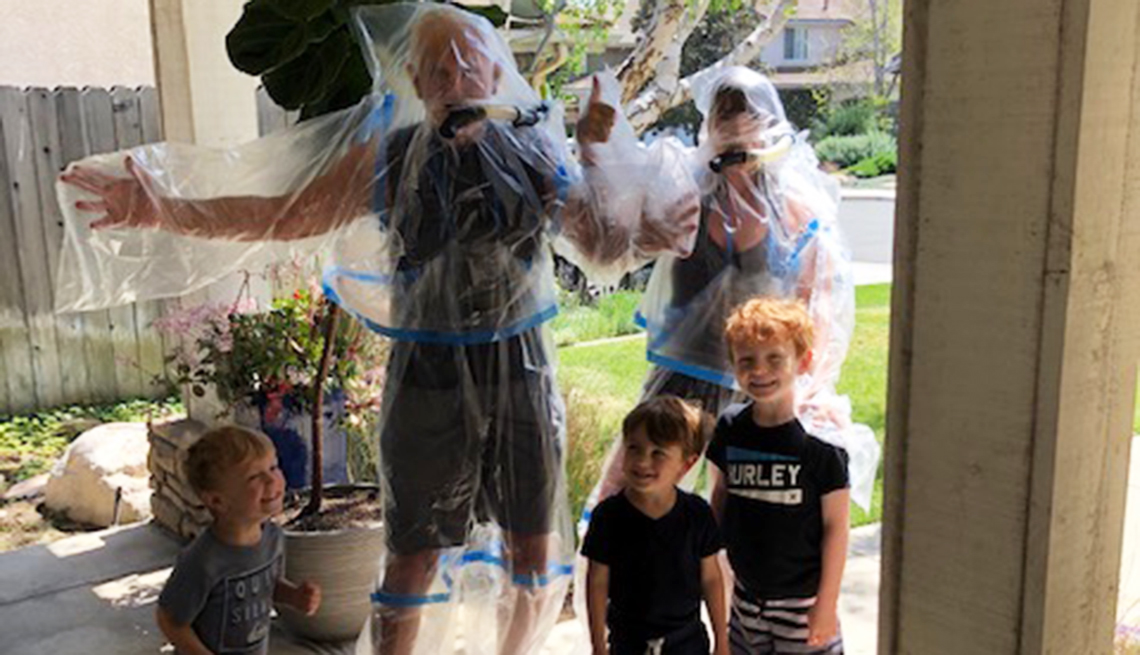 Daria Lucarelli and her husband Bobby made plastic suits out of trash bags to safely hug their grandchildren amid the COVID-19 outbreak.
Courtesy of Nick Kobe
By
Michelle R. Davis
AARP
En español
June 11, 2020

America was a nation of huggers. We cuddled our grandchildren, embraced to provide comfort and hugged in greeting.

But COVID-19 has changed that. Now hugging can be hazardous, carrying with it the risk of transmitting a virus that travels through close contact. So will our culture abandon hugging?

"We're going to see a lot less hugging in the future,” said Gail Saltz, an associate professor of psychiatry at NewYork-Presbyterian Weill Cornell Medical College. “Shaking hands and touching the cheeks of complete strangers probably hasn't made sense for a long time, since we know how contagion works."

Embracing in the time of the pandemic is about risk management. For many, especially those 65 and older and those with underlying medical conditions who are at high risk for COVID-19, hugging should mostly be off the table, at least until a vaccine is found, said William Li, a physician studying COVID-19 and president and founder of the nonprofit Angiogenesis Foundation.

Younger people also may be reluctant to hug parents or grandparents out of fear they might transmit the coronavirus. The decision not to hug can actually be a demonstration of caring, Saltz said.

"There's concern about putting the older person at risk,” she said. “The person who loves them would feel horrendous if they were the source of the virus."

But people miss hugging so much, they're getting creative. One New Jersey grandmother donned a head-to-toe unicorn costume and visited her grandchildren for hugs. Maureen Sweeney, 58, of Cinnaminson said it was “overwhelming” the first time she embraced her grandchildren after months without doing so. She disinfects the unicorn between uses and even bought a shark costume for her husband.

Maureen Sweeney safely hugs her grandsons for the first time in months with the help of a unicorn costume. Video courtesy of HughE Dillon. 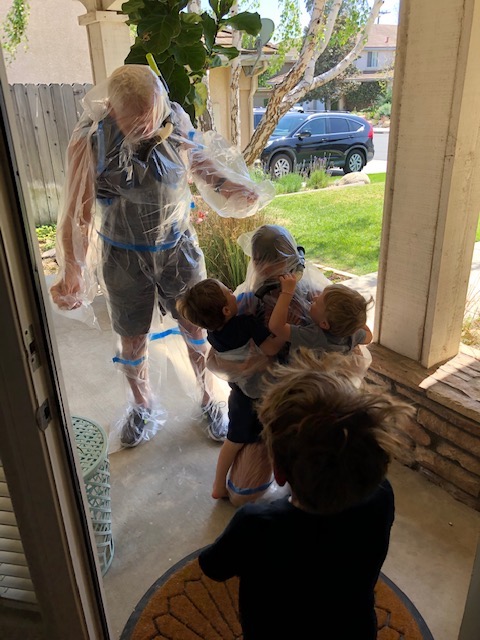 After weeks of quarantining, Daria Lucarelli, 57, of Ventura, California, had had enough of waving to her four grandchildren from afar. She bought clear trash bags, then cut and taped them to create two full-body plastic suits, throwing in scuba snorkels for breathing. She and her 73-year-old husband showed up on their daughter's doorstep for hugs.

"It was electrifying,” Lucarelli said. “You don't realize how much you miss the hugs until you actually feel them."

The importance of touch

Hugging has both mental and physical benefits, said Asim A. Shah, the executive vice chair of the department of psychiatry at Baylor College of Medicine. Touch is particularly important for older people, who often report feelings of loneliness, Shah said.

Human contact stimulates the brain to release the beneficial hormone oxytocin, decreasing anxiety and stress, which can boost the immune system. One study found that hugging and emotional support make people less susceptible to illness, and with milder symptoms if they do get sick.

In a recent survey of COVID-19 lockdown activities by the Touch Research Institute at the University of Miami Miller School of Medicine, older respondents generally seemed more content at home than their younger counterparts, but many in the older group noted that what they missed most was hugging their grandchildren, said Tiffany Field, director of the institute.

Despite that, Field said she doesn't believe widespread hugging will be returning any time soon. In the future it may be reserved only for the closest circle of family and friends.

"I don't think hugging in public is going to come back,” she said.

With social distancing in place, it's important to find behaviors that can substitute, in part, for hugging, Shah said. Interaction through video chatting platforms can simulate about 80 percent of the benefits of touching, while talking on the telephone comes in at about 50 percent, Shah said.

Enhanced communication can also go a long way to ease the lack of human touch, whether that's by text, socially distant face-to-face conversation or written letters, Saltz said. “You can say, ‘I love you so much, I wish I could hug you,'” she said. “Words can touch us, too."

For 60-year-old Linda Hidde, of Appleton, Wisconsin, the decision to hug her two young grandchildren came after quarantining for weeks. The normally cheerful Hidde said she became depressed and cried daily.

"It was taking a toll on me,” she said. “I finally decided this had to stop."

She began visiting — and hugging — her grandchildren again. But Hidde said she's taking precautions by mask-wearing and handwashing and won't interact with her grandchildren if she feels even the mildest symptoms, like a sore throat.

People should be cautious and assess the hazards involved with hugging, and use strategies to make contact safer if they choose to hug, said Theodore Bailey, chief of the division of infectious diseases at the Greater Baltimore Medical Center. Wearing a mask and clean clothes and washing hands can help, he said.

"Most of the things we do in life have some risk associated with them,” he said.

Getting rid of hugging altogether “wouldn't be justifiable on medical grounds,” Bailey said, noting that the pandemic is an unusual situation that won't last forever.

Bailey and his wife both work with COVID-19 patients, taking proper safety precautions, and after they shower and change clothes, they do hug their young children. However, Bailey has not visited his 82-year-old mother who lives in another state. Instead he bought her a tablet for Zoom visits.

Hugs should be fully consensual. Don't approach someone for a hug without discussing it first, Bailey said. “This is an exceptional situation and people's comfort with risk is not the same from one person to the next,” he said.

Generally, you can hug the people you're quarantined with. The people you live with are safe to hug, unless they're working outside the home in jobs that might expose them to the virus or to a lot of people, Li said.

Convey affection in different ways. Send emojis by text, throw kisses through video chat, read a book to grandchildren over FaceTime, express yourself through talking or writing letters, said Raquel Bild-Libbin, a Miami psychologist. “We don't want people to feel they aren't connected and loved,” she said. “It's just communicated in a different form." 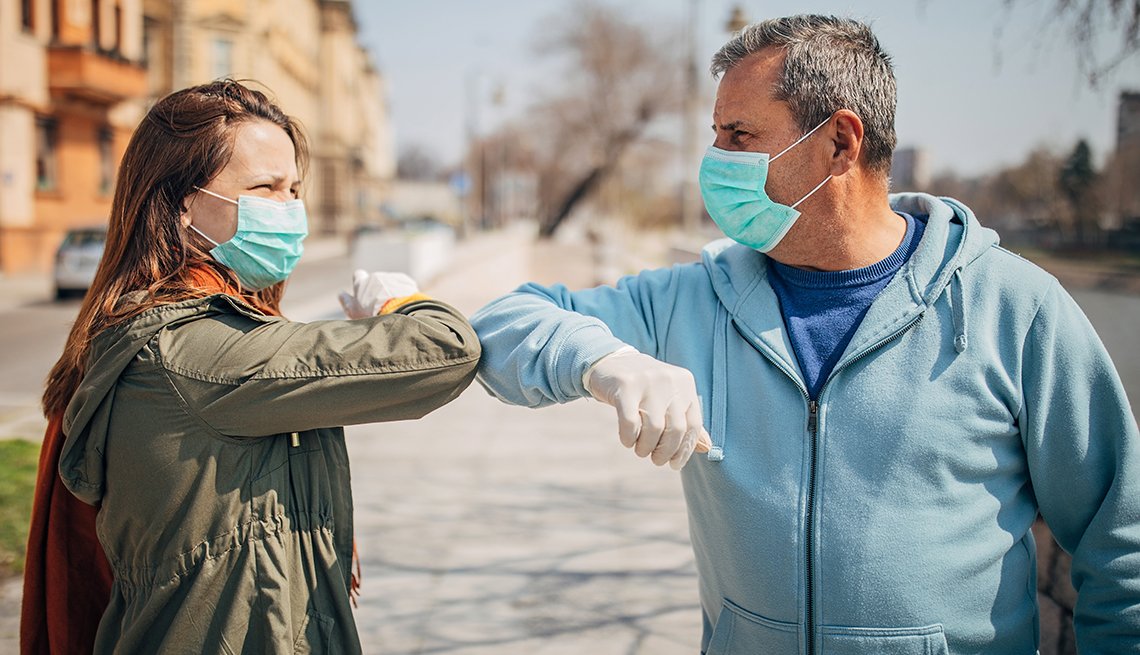 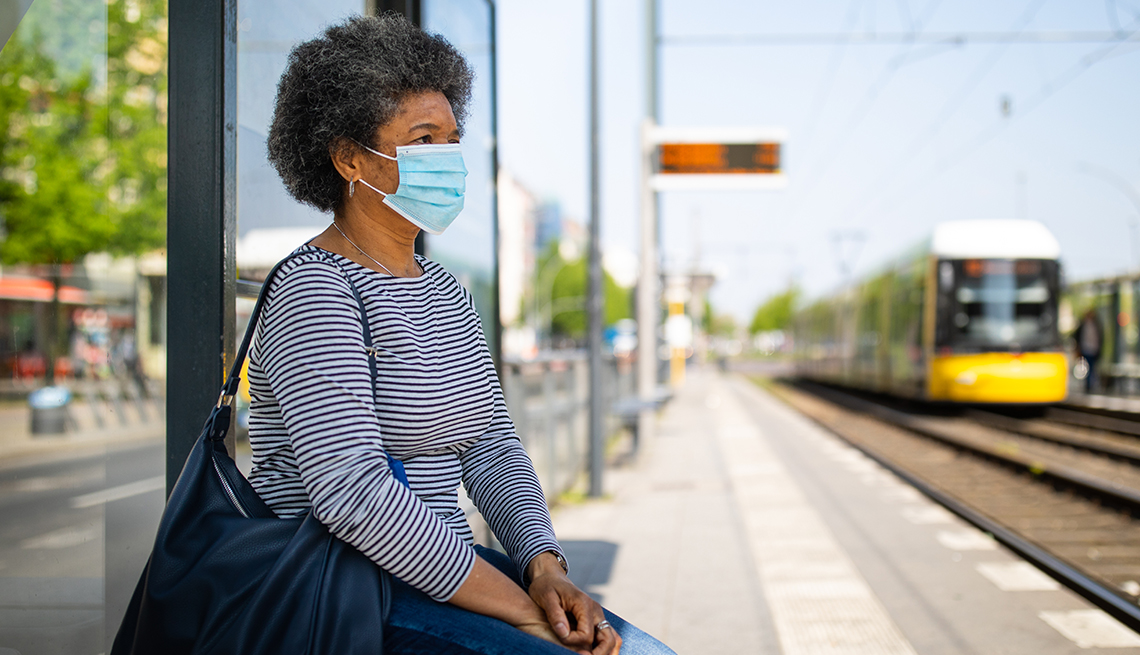 10 Things the Pandemic Has Changed for Good

Telework and face masks aren't going away, experts say, but movie theaters might be