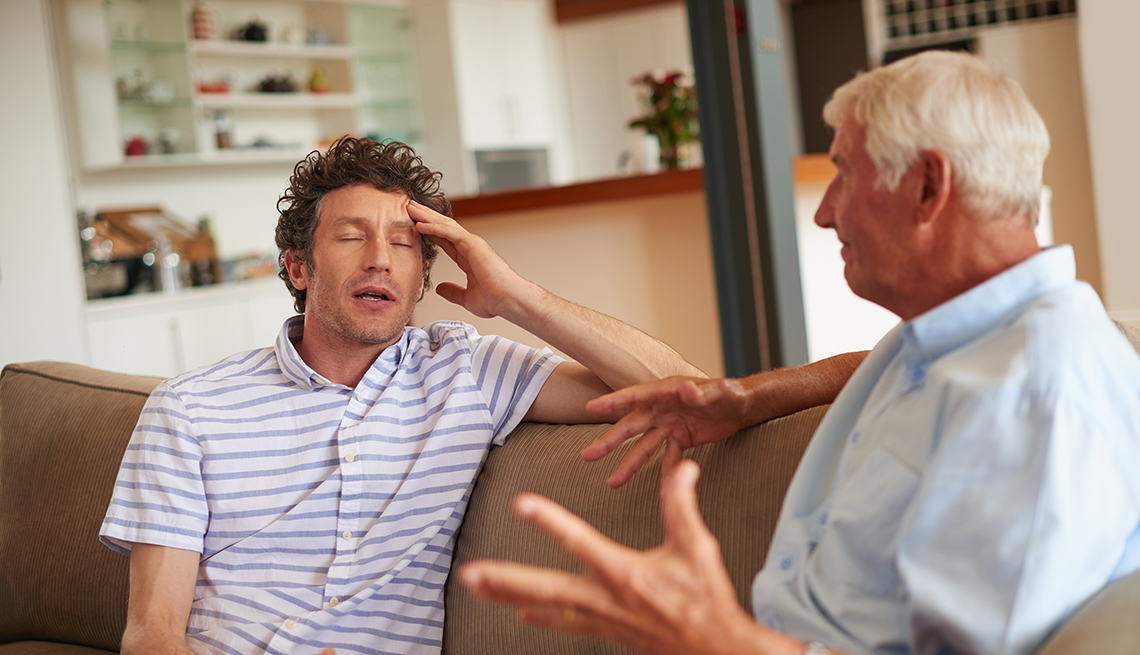 For most of my 20s, I kept two phone lines. One number was for everybody, except one person; the other was for my mother.

This was in the 1980s, before caller ID. I needed to know, with absolute certainty, that I could pick up my regular phone and not end up in a two-hour conversation about whether I was making enough money, or if I was dating, or if I had heard from that nice boy who had dumped me or whether I knew there was another serial killer in my neighborhood. So much to talk about! Most of these discussions played to my deepest anxieties that I was never going to make a living as a writer and never find someone to love me — though maybe none of that mattered because I would end up chopped up into little bits by the serial killer (who probably never called his mother, either). My mother wasn't trying to make me hate her. She loved me — and love makes people do strange things.

Now that I have two grown sons, I see things all too clearly from my mother's perspective: the endless anxiety, the near certainty that my kids are on the brink of making life decisions they will not be able to walk back, the absolute certainty they won't wear earmuffs when everyone should wear earmuffs. But now there is caller ID, unfortunately, so my sons can tell when it's me calling and not pick up.

Before I reach the point of registering myself as a “private caller,” to improve the odds they'll answer, I'm trying to get a grip. And you should, too. There are so many ways to push away your adult kids. Here's a small sampling of what not to do.

Want your kid to avoid you on a daily basis? Make sure you have no idea where you end and he begins.

Susie Jo Levin's mother was very eager for her to get married. Very. Eventually, Levin, 58, a writer in northern New Jersey, met a lovely guy and got engaged, but the relationship faltered. “Our breakup was sad but amicable. I tell my mother over the Thanksgiving holiday. She has a meltdown. She gathers every speck of childhood memorabilia in her house and stuffs all 10 boxes into my car. Why? I don't know. She was just furious. But this is what every newly dis-engaged woman needs in a 250-square-foot apartment: a vintage Easy-Bake Oven, letters from camp and old prom dresses.” Somehow, says Levin, “this was her breakup” — caused by her daughter's crappy choices.

Fast-forward a few years, when Levin met the man she ultimately did marry, and the ex-boyfriend (now a friend) was at their wedding. Her mother turned to the ex and said, “See, this could have been your wedding."

Jane Greer, a psychotherapist and author of What About Me? Stop Selfishness from Ruining Your Relationship, has counseled many parents and their adult children. This lack of boundaries, she observes, is the children's No. 1 complaint. It's a reaction to the parent “who takes your successes and failures way too personally — who wants to know what you're doing, where you're going, how much it costs,” Greer says.

"And the kid is thinking, What part of ‘on my own’ don't you understand?"

You lend the kids money, then complain about their spending. You give the grandkids Amazon gift cards but tell them they're only for books. “My husband's mother gave us money for a down payment on the house, which meant, as far as she was concerned, she got the key,” says one friend. “Actually, that was fine. What wasn't fine was that she never, ever knocked before she used it."

First, gifts are wonderful, but they do not give you an all-access pass to your adult child's life. And second, a gift with strings attached isn't really a gift at all.

The “I didn't want to trouble you” sentiment seems so kind and considerate, doesn't it? But very often, your desire not to be a nuisance ends up causing a problem that is far bigger than if you had spoken up.

Joan Schmidt, 55, a New York City attorney, regularly took her 90-year-old mother to doctors, but occasionally her mom would get into “I don't want to be a bother” mode. “One day she decided to ask her 88-year-old friend Millie to drive her, rather than ask me,” Schmidt recalls. “So Millie did — dropping Mom off at a large shopping center in Eastchester, even though my mom apparently didn't know which building to enter.” Her mother ended up walking a mile home during the summer heat. In another instance, Schmidt's mother needed her car moved but didn't want to disturb Joan, who was in her home with her, working in another room. “So she asked my elderly aunt who lived across the street and had Alzheimer's and macular degeneration to do it.”

We all like to be in control of our lives. But your desire to stay in command may be counterproductive. I say this as someone who often had to rush my parents to the hospital for originally trivial medical problems that they ignored for months. (Men, here's an idea: Don't ignore a swelling prostate to the point where you have to be catheterized.) Sometimes you must trouble those closest to you.

When your children are 15 or 16, you're supposed to worry and be upset when they stay out late and don't call. And you can't help but shame them with tales of the heart attacks you suffered as a result. But now they've grown up and live far away. So why are you still waving the guilt wand over them if you don't immediately know where they are? Or, worse, doing what I used to think of as tag-team angst, with my father calling me to say, “Where were you? Your mother was so worried."

"Your children are not mind readers,” says Jane Isay, author of Walking on Eggshells: Navigating the Delicate Relationship Between Adult Children and Parents. “They don't know what's going on in your household, or just intuit that you need them or that you are worrying."

Sure, feeling guilty may make the child call. But at what cost? “Guilt creates resentment,” Isay says, “and makes it that much harder for them to pick up the phone next time.”

Though this is a minor infraction, mindlessly forwarding email to your children can drive them berserk. “Every day I receive multiple forwarded emails from my father, clueing me in on World's Scariest Bridges or Unlikely Animal Friends,” says Jancee Dunn, author of Why Is My Mother Getting a Tattoo? and Other Questions I Wish I Never Had to Ask. “He means well, but I don't think some retired parents are fully aware of the sheer volume of emails their adult children receive in a day. Deleting all of the forwarded email just becomes one more task.”

Another tip: When you send your kid an email, you don't have to call to tell her you “just sent an email."

"You wanna put all your money into 7 percent CDs."

"That's crazy — I always had all my money in 7 percent CDs. Doubles your capital every 10 years!"

"Do you still have them?"

"We all love giving advice in the areas we feel competent in,” Greer explains. “But be aware that your expertise may be unwelcome if it doesn't address the challenges of today.” This is particularly true when it comes to financial advice or financial help. Let's say you have promised to pay for half of a grandchild's college tuition — a loving gesture parents make when their child has a baby. As generous as your $2,500 is, it may not even make a dent in Grandbaby Einstein's college costs. So before you make that kind of commitment, know what you're in for.

Do your kids think of family special occasions with pleasure? Or do your rules and regs make the whole affair feel like a holiday death march?

"If my sister and I didn't celebrate our birthdays with our mother, she was wounded,” says Laurie Lewis, 59, a New York City real estate broker. “It wasn't good enough that we all went out during, say, that week; it had to be on the actual day. If I suggested another day, perhaps more convenient, the hurt turned to an angry response of, ‘Let's just forget your birthday this year, since it does not mean that much to you.’ “

I understand that you want to honor family traditions. But as your kids get older, have spouses, children and obligations of their own, you have to allow for the possibility that they need to develop their own traditions. Plus, you want to be a joyous celebrant with them, not the Enforcer.

You know what another word for “constructive criticism” is? Criticism.

"Here are the subjects my mother feels the need to comment on,” says Moira Lawson, 59, a health policy adviser who lives in Baltimore. “My looks, my parenting, my clothes, my home, how I spend my money — pretty much on everything.”

"My parents have told me repeatedly that they don't believe in divorce,” says Mariana Olenko, 52, of New York City. “Even though I'm divorced — and a divorce lawyer."

Ellen Stimson, 56, a writer in rural Vermont, admits: “It's really hard to pick just one incident here. One Thanksgiving my mother arrived early, before all the other guests, and when I went upstairs to dress, I heard a crash and the sound of shattering glass. I ran back downstairs to find her in the kitchen, standing among the shards that had been my chandelier. She'd apparently decided it was too dirty for company and had taken it down to wash it. But it had been on, and was still hot, and it exploded when the water hit it. As I walked in on this chaos, she said — without missing a beat — ‘I guess the dirt was the only thing holding it together.’ “

Observes Isay, “One of the great skills of parenting adult children is learning to keep your mouth shut."

This is a skill I intend to practice. Soon. I can't wait to tell my two sons — once they answer their phones.

Judith Newman is a columnist for the New York Times and author of To Siri with Love: A Mother, Her Autistic Son, and the Kindness of Machines.