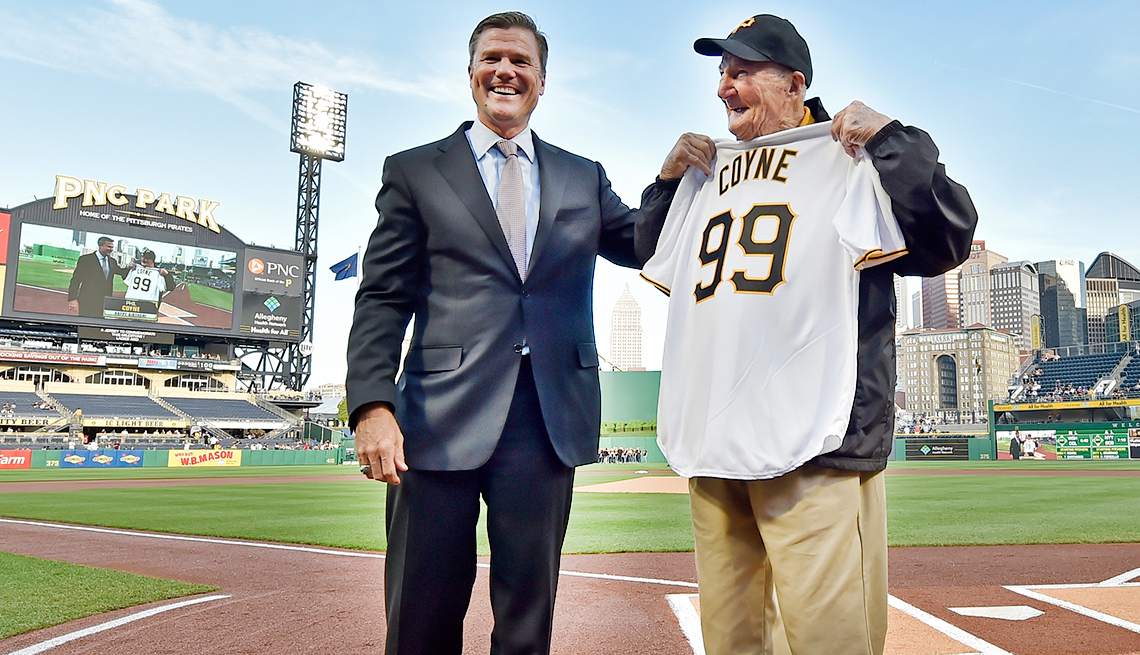 Phil Coyne, 99, has worked as an usher for the Pittsburgh Pirates since 1936, the year the Baseball Hall of Fame inducted its first members, including Babe Ruth and Honus Wagner. But now he's officially worked his last game in the stands, and is retiring after suffering a recent fall, according to a report from the Incline, a Pittsburgh-focused website. In a statement, Pirates president Frank Coonelly said the team will honor the oldest usher in the Major Leagues with a special ceremony before their game against the St. Louis Cardinals on April 27, which will also be Coyne's 100th birthday.

"Legends never really retire," Coonelly said. "Having worked his first Pirates game at the age of 18 in 1936, Phil remains number one on our organizational seniority list and will always have a place on our team. If Phil has indeed worked his last Pirates game, he has served our fans with incredible grace and distinction and he certainly has earned the right to watch Pirates games with his feet up from the comfort of his easy chair. We very much look forward to April 27, when Phil and nearly 200 of his family and friends will be our guests as we celebrate Phil's 100th birthday during a special pregame ceremony."

Over the years, Coyne moved with the franchise, starting at Forbes Field, going on to Three Rivers Stadium and, most recently, PNC Park. Last summer, the Pittsburgh City Council honored Coyne by designating Aug. 29, 2017, as "Phil Coyne Day." And on his 99th birthday, the Pirates presented him with a personalized No. 99 jersey.

"I'm done," Coyne told the Incline. "I quit this year because my head — something's wrong up there. My equilibrium is off, and I was scared of falling."

A retired machinist who never married, Coyne is looked after today by various nieces and nephews. His only break from being an usher was when he served in Italy, France and Germany during World War II. When he returned, he went straight back to work.

Coyne told the New York Times that one of his most memorable moments came during the 1960 World Series, when he watched Bill Mazeroski hit a home run in the bottom of the ninth inning of Game 7. The Pirates beat the Yankees, picking up their first World Series win in 35 years.

"That was a wild day," Coyne said.