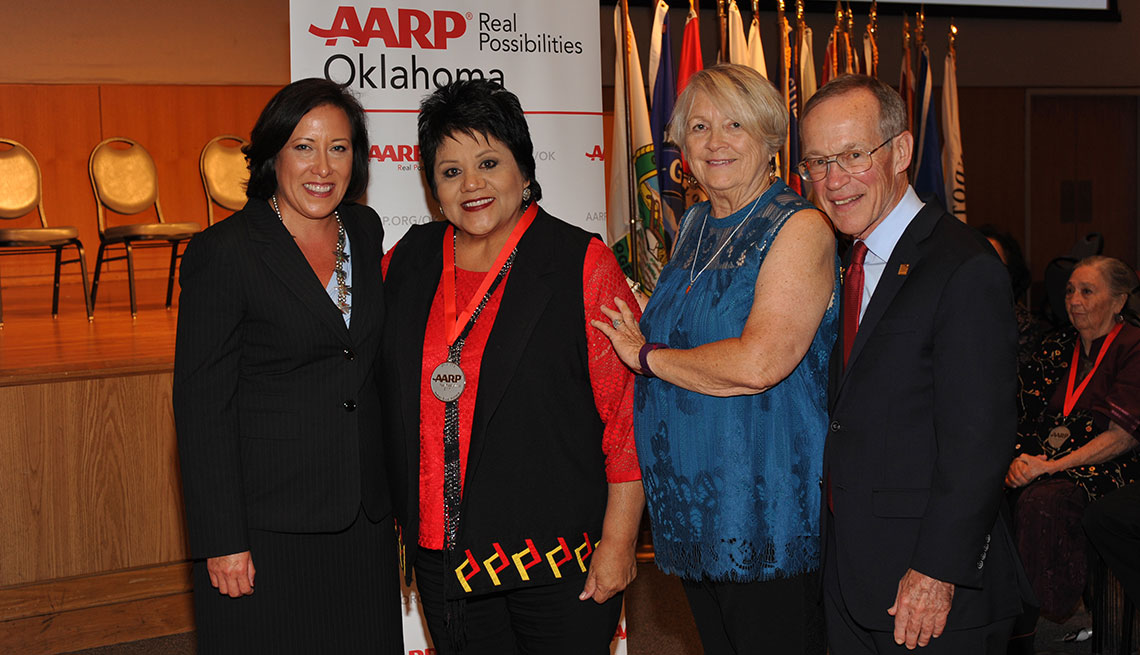 In October 2017 AARP Oklahoma honored 50 people at the 9th Annual Indian Elders Honors. As the nomination process for 2018 opens this week, we profile one of the 2017 honorees, Cynthia Yerby, 65, a member of the Seminole Nation in Oklahoma.

The perfect personification of AARP’s “Disrupt Aging” motto, Cynthia Yerby talks with passion about her many hard-fought accomplishments: getting a master’s degree while working and raising a family; mentoring youth; becoming a traditional sewing artist; and — when she was 40 years old — launching a career as a champion arm wrestler. 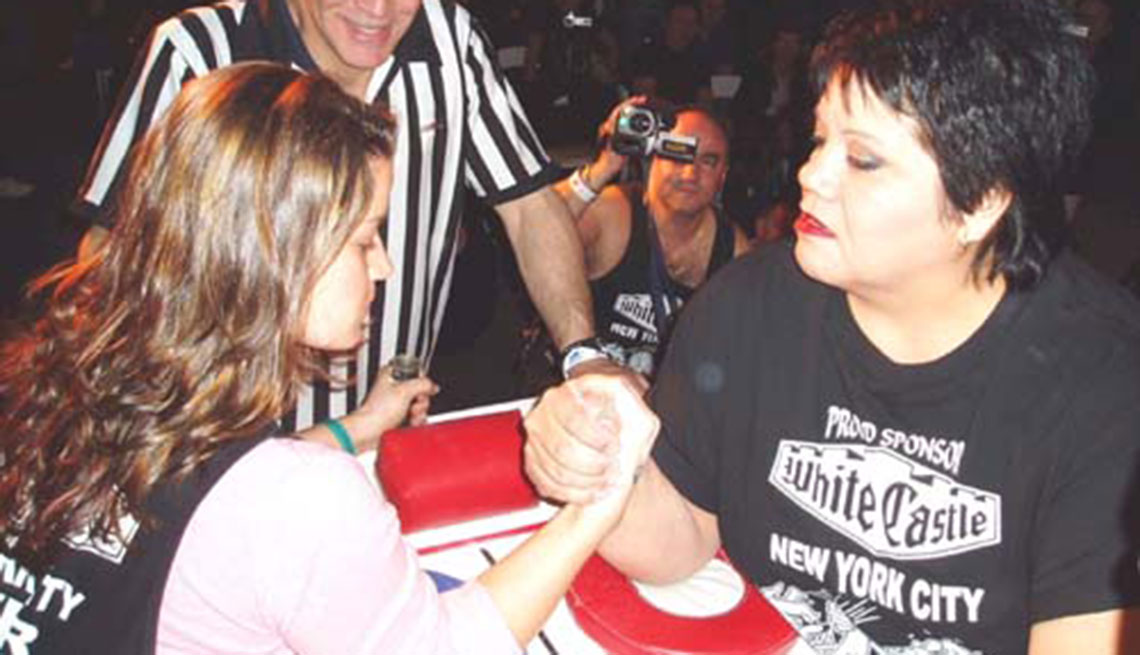 Yerby, pictured here in a 2002 match, is a champion in New York, where she is one of only two people in the New York Arm Wrestling Association hall of fame.

Mentoring leads to a life change

Yerby is a retired educator and senior counselor from Seminole State College in Oklahoma, where for 35 years she provided educational advisement and personal guidance to students.

When she was 40, one of her students invited her to see him compete in arm wrestling. After the official competition was over, people in attendance started to challenge one another, so Yerby gave it a try — and ended up beating her opponent easily.

From there she started competing locally and a new passion was born, Yerby said. Eventually she entered the World Arm Wrestling Championships in Petaluma, Calif. She placed third in her first competition and eventually went on to travel the world as a member of the USA arm wrestling team, becoming a 10-time world champion, 11-time USA national champion and a state champion in 31 states.

Embarking on such a physical sport at an older age was certainly unique, but Yerby wasn’t about to let anything hold her back.

“People usually start when they are 19 or 20. I was always competing against younger contestants. I once competed against a 16-year-old when I was in in my 40s and won,” Yerby said.

Due to her stellar reputation, she is often challenged to arm wrestle by people she meets. One of her fondest memories is arm wrestling country music star Tim McGraw, whom she met at a movie premiere party. She’s also arm-wrestled the late blues artist B.B. King and former football coach Barry Switzer. 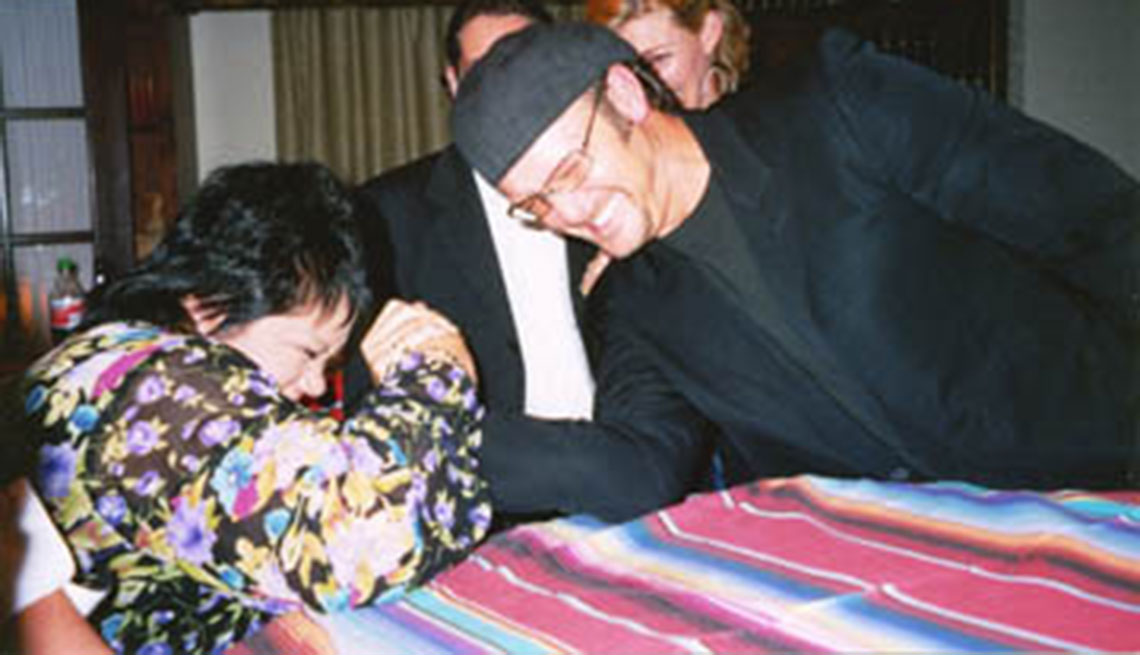 Cynthia Yerby got to meet, and arm wrestle, country music star Tim McGraw in 2004 at a party for one of his movie premieres.

Yerby is mostly a self-taught arm wrestler. “It was trial and error and [about] wanting to do it so bad,” she said.

In her first four years of competition, she couldn’t get past third place and considered quitting. Deciding she would try one more time in honor of her mother, who had recently passed away, Yerby went to a high school coach for assistance on strength training.

“He gave me a weight lifting routine and told me ‘you do this, you will win,'” Yerby said. That statement would become the mantra for her life.

“Three months later I went to Petaluma again and got to the finals. At the last pull, I couldn’t even walk. I was overcome; I couldn’t breathe. I just looked up and said ‘help me, mom,’” Yerby remembers. “My opponent was a big blonde and looked ferocious. I just slammed her [arm], and everyone around started crying and screaming. … The referee announced that I was finally the new world champion!”

Yerby gives motivational speeches where she tells the audience to persevere against any challenge and to always go in with the attitude that you can succeed. “Anything worth anything isn’t going to be instant. You have to work. … We set our own limits,” Yerby said.

After dealing with health issues, including winning a battle against the potentially fatal Graves disease, Yerby retired at age 59 as one of the most successful female arm wrestlers of all time.

But retirement hasn’t impacted her work ethic. She turned her love of sewing into an endeavor to preserve and promote the Seminole patchwork tradition. She sews for numerous tribes, including the Muscogee (Creek) Nation, which recently invited her to join them at the National Museum of the American Indian in Washington, D.C., where her work was featured for a week. You can also see her creations on Facebook at Native Designs by Cynthia Yerby.

Yerby, who has counseled and mentored tribal youth throughout her career, takes that role very seriously. “There is always somebody watching you, so be somebody that people can look up to,” she said.

She is glad to see elders being recognized by AARP Oklahoma again this year.

“Elders should be recognized for their tenacity and their spirit, how they help their families, the love they share for people,” Yerby said. “We are passing [Native American] languages down and trying to teach our kids how to do right, to survive in life.”

Yerby — who has been married for 42 years to her husband Monty and has two adult sons and three grandchildren — says she misses professional arm wrestling but enjoys her retirement. “But if I wanted to, I would get ready and do it again.”

Nominations for the 2018 Oklahoma Indian Elder Honors open this week. To nominate a deserving elder, visit www.aarp.org/ok. The deadline for submissions is April 30th.