Julie Boxx of Menifee, Calif., is looking forward to watching the Olympics from the comfort of her living room when her daughter Shannon competes for a gold medal in soccer this summer. 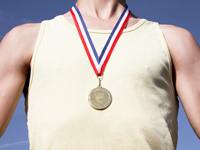 Julie Boxx will be watching the 2012 Olympic Games on her TV.

No, she's not traveling to London to watch the Games firsthand. Been there, done that. Three times in fact, not only for Shannon's previous two Olympics, but also once to root for her older daughter, Gillian, a catcher on the 1996 gold-winning U.S. softball team. And that's to say nothing of Shannon's three World Cup tournaments.

Don't get her wrong. For a parent of a competing athlete, the Olympics never becomes old hat. (Best were Atlanta in 1996, because they were her first Games, and Greece in 2004 because — duh — it was Greece.)

Nadia Comaneci — Gymnast scored a perfect 10 in 1976, now sits on the board of the Special Olympics

But Boxx knows that Shannon, 35, already a two-time Olympic gold medal midfielder, is going to have plenty of support in England, with a boyfriend and other friends on hand. And by watching on television, Boxx will finally get the chance to actually watch other Olympic events live — while also avoiding all the crowds and the logistical headaches that she knows from experience will bedevil Olympic parents headed to London.

When it comes to Olympic parents, Boxx is about as seasoned as they get: a single mother who nurtured not one, but two youngsters as they climbed the heights of athletic achievement. Boxx doesn't claim to have had the prescience to have always known the Olympics were in the future for Gillian and Shannon, but she did know from early on that she was raising girls who weren't going to be content playing with dolls.

"My kids, both of them, were active at a very, very early age," she says. "Each of them could ride a two-wheeler by the time they were 4. They were really coordinated and had a lot of energy. You had to take it outside."

In short order, Gillian, almost four years older than Shannon, had bulled her way into an all-boy baseball league and Shannon had wiggled her way through rules that said she had to be 5 before playing organized soccer. Stardom wasn't long in coming for either girl — and then kept on coming in high school, college and beyond.

It was vindication of a sort for Boxx, who worked for 30 years as an administrator in the Los Angeles Department of Recreation & Parks. She had been athletic when growing up, but the idea of equality for female athletics was still a couple decades away.

"I tried basketball, but girls couldn't run past half court because we were thought to be too weak," she says. "I tried volleyball, but there were nine of us and you couldn't move from your position."

Neither Gillian nor Shannon was ever the type to concede to any "weaker sex" foolishness. Boxx remembers, in particular, how Shannon's aggressiveness at an early age meant a lot of falling and bouncing quickly back to her feet.

Next: No fear of falling. »

"The ground never held any fear for her," Boxx says. The fearlessness serves Shannon well in the highly physical version of women's soccer played today, especially for defensive players like her who must tackle the ball away from opponents.

Because the girls played sports at such a high level from early on, Boxx's weekends were given over to endlessly driving to games and tournaments. "People say, even family, 'Oh you're such a martyr,' but trust me, I was never a martyr. I loved it as much as the kids did."

In fact, despite their world-class athletic achievements, which have sent Boxx across the globe, some of her favorite memories are from an earlier time, before the huge crowds, television cameras and glamorous venues in Europe and Asia.

"The thing I remember the most are those trips in the car and having them to myself. That was a magical thing."

Of course, raising two girls into Olympic gold medalists also suggests something of the magical, and not a little bit of it emanating from their mother.