(Video) Caregiving Dahil Mahal Kita (Because I Love You) presents the traditions and challenges of family caregiving in the Filipino-American community through the eyes of three unique caregiving stories.

Having been a caregiver for a father with dementia, Gen. Antonio "Tony" Taguba can speak personally about the sacrifice and dedication it takes. Now he has a message to share with caregivers everywhere.

Since retiring from the Army, Taguba has stayed busy as a community ambassador for AARP and was featured in AARP's short 2014 documentary Caregiving Dahil Mahal Kita (Because I Love You), in which he talks in depth about taking care of his father before he passed away in 2011.

In addition to his caregiving advocacy, Taguba, born in the Philippines, spends his time promoting the cause of Filipino veterans of World War II and urging lawmakers on both sides of the aisle to recognize Filipino veterans with the Congressional Gold Medal as a first step to bringing those veterans of his father's generation out of the shadows of history.

AARP sat down with Taguba to talk about his community efforts, the caregiving documentary and his love of running.

Discuss: Getting the family to help with caregiving duties 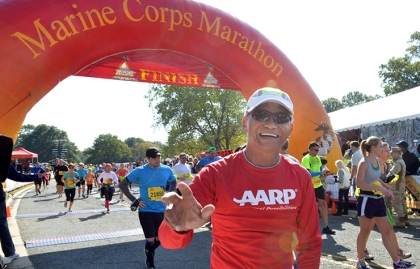 Q: What's the main message you want to share about caregiving?

A: I want to raise awareness about family caregiving. The Asian community — regardless of ethnicity — is very quiet about it. We don't expose our family issues. We tend to be a bit more private about that until there's a crisis. It's not a common topic around the dinner table to ask, "Hey Mom and Dad, what's your plan for your health after you retire?"

We tend to not dwell on the caregiving part — quitting our jobs, caring for our parents.

Q: What was the hardest part of being a caregiver yourself?

A: It was hard scheduling time to care for my mom and my dad. The five of us kids were stretched from Arizona to Virginia. Because caregiving is 24/7, you can't clock out and go home. And my mom was being treated for cancer during this time.

Q: What makes the caregiving documentary relevant to everyone?

A: It's been shown in the Chinese community, to multiethnic audiences, Koreans, Laotians, Hmong. Caregiving is ethnic agnostic. It will affect the white community, the black community, the Arab community — it's all folded into a sense of obligation.

Q: Did your father talk about his wartime experiences?

A: Like a lot of our veterans today, he touched on it but wouldn't really describe the horrific nature of war unless you asked him to talk about it. My theory is that unless you're a fellow veteran you'll never understand. All they want is to be appreciated.

Medication Confusion? Scan and manage your meds with the new AARP RX app

Next is immigration. In the 1990s, Congress opened immigration, but those doors closed in the early 2000s. They recently opened again.

Then, you have this thing called recognition. Since 1946, Filipino war veterans have not been formally recognized by Congress. The Tuskegee Airmen, the Japanese American Nisei, Navajo code talkers, Montford Marines [African American Marines trained at Montford Point in North Carolina], just recently Puerto Ricans, and the Women Airforce Service Pilots have all been recognized. All minority military.

Q: So you're working to get lawmakers to award the Congressional Gold Medal, the highest civilian honor that the United States can confer, to Filipino veterans?

A: I'm trying hard. I know there are other priorities going on today, but in my opinion, this is a very simple matter and there's very little cost. The rest is carried by the community. It's a long time coming. We think we have 16,000 to 17,000 left, and they die each day.

Q: As an aside, how do you feel about the two women who completed Army Ranger training?

A: I think it's wonderful. I've seen women in combat — for example, medics are in frontline battles, treating soldiers. I know a Filipina who flew combat missions, and I've seen women serve on submarines.

Q: You continue to challenge yourself physically. You run marathons and climb fourteeners [peaks that rise above 14,000 feet]. How important is it to maintain your health?

A: Maintaining fitness in the military is one thing. It's harder when you're out. I've done hiking when I was younger. But now, I need physical therapy. I have back problems. My mind tells me I gotta do something. So I take treatment for my back and I run.

Q. How many marathons do you hope to run?

Q: Thinking about how long you'd like to live is part of AARP's Life Reimagined program, which you're familiar with. Tell us about how this can help veterans.

A: I want to strategize how to introduce Life Reimagined not just for veterans but for military families. The military's very well adapted to helping veterans transition to civilian life, but they don't always support the spouses. They have a slogan, "Army Strong," but the entire military family is part of that strength. It's the "distaff chain of command," so to speak.

AARP's Life Reimagined is a good program. I've taken the test and it validates what I want to do to help other people. It helps you figure out how to navigate through your life, by being introspective and reflective.