A year after the state slashed spending on the Elderly Pharmaceutical Insurance Coverage (EPIC) program, it will restore funding — at least for the first three months of 2013.

The news comes as a relief for people like Melvyn May, 76, who paid $126 for each 90-day supply of seven medications he takes daily for heart disease, diabetes and high cholesterol. 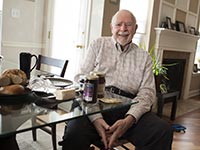 In January, May's copayments will return to $20 each, the same copay he was charged in 2011.

After cutting the EPIC budget by about $12 million to help erase a $10 billion state budget shortfall, the legislature earlier this year restored EPIC funding for Jan. 1 to March 31. What will happen when the 2013-14 fiscal year begins April 1 depends on Gov. Andrew Cuomo (D) and the state legislature.

Before the cuts, roughly 190,000 low- and middle-income New Yorkers 65 and older relied on the program to supplement their Medicare Part D and any prescription insurance coverage they had.

Under the scaled-back program for 2012, EPIC was free but was limited to low-income people and did not contribute toward copays until a Medicare enrollee and his or her insurer had spent $2,930 on prescriptions, the point where the Medicare Part D "doughnut hole" begins.

The changes were "absolutely devastating to many seniors, especially those with serious or chronic illnesses," said Cathy Roberts, who works on health care access issues at the Empire Justice Center in Albany.

For instance, Muriel Kenitz, of Galway, stopped taking one of her prescriptions, a hormone medication to help sharpen her memory, relieve severe headaches, prevent osteoporosis and lower cholesterol.

The news of the EPIC restoration is a "major relief," said Kenitz, who turns 74 this month. "But all that money I lost [paying for other medications] I won't recoup."

Kristin Legere, AARP New York communications director, said people reported being shocked when they went to a drugstore to pick up a prescription and found the price had skyrocketed, sometimes by hundreds or thousands of dollars.

Most EPIC enrollees paid about $875 in additional out-of-pocket costs for their medications in 2012, an AARP New York analysis found.

May, a retired rabbi in Rockaway, Queens, said he had heard about the cuts but didn't realize the full significance. After his shock at the pharmacy counter in January, May got angry. Then he got busy.

He participated in an AARP New York tele-town hall meeting in which the EPIC cuts were discussed. He also called his legislators to express dismay over the cuts, spoke at community organization meetings and talked to friends.

Next page: The cuts triggered a rigorous lobbying effort. »

May was not alone. The cuts triggered a rigorous lobbying effort by AARP New York volunteers and other organizations.

In March state legislators announced that funding for EPIC would be restored on Jan. 1.

Cuomo hasn't indicated whether he will ask for EPIC cuts for the fiscal year that begins April 1 or support fully funding the program.

The temporarily restored EPIC program has two plans, as it did in 2011 before the cuts: a fee plan and a deductible-only plan.

All EPIC members must be enrolled in a Medicare Part D drug plan, which is still the primary drug coverage. After EPIC deductibles are met, participants will receive help through EPIC as secondary coverage and will pay drug copays of $3 to $20.

Winnie Yu is a writer living in Vorheesville, N.Y.