En español | President Obama has signed legislation that blocks pay cuts for Medicare physicians for one year. The measure is aimed at stabilizing medical care for fearful seniors worried by the growing number of doctors who threatened to stop treating Medicare patients if scheduled fee reductions took effect Jan. 1. 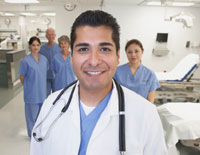 Doctors had been facing a 25 percent cut in reimbursement rates for treating Medicare patients. The new “doc fix,” which is estimated to cost $19 billion, will be paid for through funding under the health care reform law.

The legislation is the latest in a nearly decade-long series of short-term doc fixes to halt similar reimbursement reductions. Before signing the law, the president called on Congress to come up with a “permanent solution that seniors and their doctors can depend on.”

The law was hailed by AARP as well as by physicians' groups. A. Barry Rand, AARP’s CEO, praised the yearlong freeze as a bipartisan solution “that protects access to doctors for people in Medicare. Over the next year, seniors will have the peace of mind they deserve in knowing that their physician will be there for them.” Rand urged the new Congress to take up the issue next year and come up with a permanent answer to the annual problem of the mandated pay cuts.

The cuts are required because of legislation passed in 1997 that tied Medicare funding to a formula based on economic growth. Typically when the deadline for the cuts looms, Congress votes to block them. Then several months later the process repeats without lawmakers addressing the underlying problem of the formula. In the past eight years, the cuts have been blocked 11 times; five times this year.

For the more than 46 million Americans in Medicare, the threatened pay cuts had raised the possibility that more doctors would turn away Medicare patients. Rand said that the issue was critical for all older Americans, pointing out that AARP members sent more than 100,000 messages to lawmakers urging them to block the cuts.

The legislation signed today also extends for one year a Medicare program that pays Part B premiums for low-income beneficiaries who can’t otherwise afford them. The program was due to expire Dec. 31, said Joe Baker, president of the Medicare Rights Center. “At a time when the financial security of an increasing number of Medicare consumers is uncertain, programs [like this] have become essential,” he said.

Candy Sagon writes about health issues for the Bulletin.