But when she was discharged and needed to transfer to a skilled nursing facility for rehabilitation, her family learned that she had never been formally admitted as an inpatient to the hospital at all. Instead, she'd been classified as an outpatient under "observation" — a status that would cost her thousands of dollars. 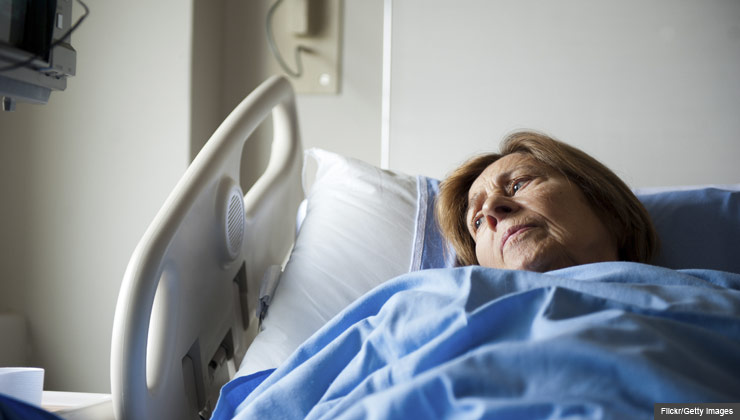 Being classified as an outpatient under "observation" can spike your hospital costs.

Most patients would regard as meaningless the seemingly slight distinction between the two labels — after all, they're getting exactly the same kind of care. But it can have costly consequences.

Under the rules, Medicare picks up the whole tab for the first 20 days in an approved skilled nursing facility for rehab or other care, but only if someone has spent at least three full days in the hospital as an admitted patient. If instead a patient has been under observation — for all or part of that time — he or she is responsible for the entire cost of rehab.

Arnau, an 84-year-old widow from Narragansett, R.I., got hit with a large bill. The skilled nursing facility she went to charged her $3,900 for a two-week stay. And although she had a Medigap supplemental policy, this insurance does not pay the out-of-pocket costs of services that Medicare does not cover.

Her family only learned about the problem the day Arnau left the hospital, says her daughter Mimi Auer, who is considering appealing the decision. At first she thought it was a mistake. But staff at the nursing facility told her they'd had four cases like her mother's just the previous week. "Four cases of the same situation, [in which Medicare patients] had to pay for the nursing home because they'd been on observation in the hospital," Auer protests. "What's going on here?"

Over the past several years, hospitals throughout the country have increasingly classified Medicare beneficiaries as observation patients instead of admitting them, according to researchers at Brown University, who recently published a nationwide analysis of Medicare claims in the journal Health Affairs. The results showed that in just three years, 2007 through 2009, the ratio of Medicare observation patients to those admitted as inpatients rose by 34 percent.

Medicare tells hospitals that the decision to admit or discharge a patient who is under observation can most often be made in less than 24 hours. "In only rare and exceptional cases do reasonable and necessary outpatient observation services span more than 48 hours," says the Medicare Benefit Policy Manual (PDF), the agency's coverage bible.

This research confirms the longtime concerns of consumer advocates. Two years ago, for example, the federal Medicare agency held a "listening session" (PDF) at which more than 2,200 hospital administrators, physicians, patient advocates and others called in — far more than any other such sessions had ever attracted — to discuss the topic of observation status.

"Almost everyone who spoke felt the practice was harmful and should be ended," says Judith Stein, founder and executive director of the Center for Medicare Advocacy. But nothing came of it, and so last year the center filed a class action lawsuit (PDF) against the federal government in an attempt to force change.

The suit alleges that the practice of putting patients in observation status not only denies them coverage for post-hospital rehab care in a skilled nursing facility, so they must either pay the full bill — more than $30,000 in the case of two plaintiffs — or forgo treatment. It also classifies them as outpatients while they're in the hospital. Therefore, their Medicare coverage comes not under Part A (hospital insurance) but Part B (which normally covers doctors' services and outpatient care). For some patients, this can also mean paying more out of pocket — especially if they need prescription drugs that, in this situation, would be covered under Part B and not under Part A or even the Medicare Part D drug benefit.

The practice "doesn't make any sense" because people only go into the hospital when they're sick, Stein says. "They [go] either on orders of a doctor or because, having arrived at the emergency department, they were told they should stay." And yet, she adds, "those who ended up in the nursing home with no payment were not aware — and neither were their families — that they were in observation status until they were discharged from the hospital. And then they were informed."

The lawsuit calls for observation status to be abolished — or at least for patients to be notified in a timely fashion of their status and given the opportunity to make a swift appeal against the decision. Some of the center's clients reported stays of up to 14 days in observation, Stein says.

What determines whether a patient is classified as an inpatient or placed under observation? Usually the call is made by the hospital, which, in many cases, may overrule the patient's own physician. But Medicare's guidelines are not clear, and many experts suggest that hospitals are placing more and more patients under observation to protect themselves against new policies that penalize hospitals for unnecessary admissions and frequent readmissions of the same patient.

In an effort to rein in spiraling costs, Medicare is now taking a tougher line with hospitals, sending auditors to investigate not only fraud but also cases in which the agency thinks that "medically unnecessary" hospitalizations have occurred. Also, to improve the quality of care, Medicare will soon start penalizing hospitals that readmit patients in less than 30 days — raising the question of whether hospitals might label people as observation patients so that they cannot be counted as readmissions if they happen to return. Cost-control measures are "perfectly understandable," says Zhanlian Feng, the Brown University study's lead author. "On the other hand, those policies may have unintended consequences" that affect patients adversely.

The American Hospital Association says that hospitals are placed in an untenable position. On the one hand, they risk penalties if they admit patients for short stays. Yet they anger patients who are put under observation. "Hospitals cannot win no matter how they handle the situation," the group argued in a friend-of-the-court brief (PDF).

The American Medical Association says the observation policy has caused confusion for physicians, as well. "The AMA supports rescinding the three-day stay policy, as well as counting observation care toward the [stay] … for as long as this requirement remains in place," it said in a letter to the Medicare agency.

Meanwhile, under the status quo, hospitals are allowed to place patients in observation at any time during their hospital stay — even retroactively. Hospital staff only are required to inform patients of their status before they leave the hospital.

Consumer advocates advise patients or their families to press the hospital for information and alert their own doctors. Many primary care physicians no longer look after their own patients in the hospital — that role often is now assumed by a hospital doctor — and they are not always aware of the implications of observation. After news of the lawsuit hit the headlines, the Center for Medicare Advocacy heard from a doctor in a prominent hospital who said that until then he hadn't realized that the practice had caused any problems for patients. "He said he thought it was just a billing issue, so he hadn't paid any attention to it," Stein recalls.

Officials at the Centers for Medicare & Medicaid Services (CMS) declined to be interviewed for this article, citing the ongoing lawsuit. Meanwhile, Stein says, many patients and their families continue to be stymied by the complicated rules. Here's what you can do to help avoid big bills, however, if you, or someone you're looking out for, is placed under observation in the hospital:

Also of interest: How would you strengthen Medicare?