En español | A piece of legislation enacted to help breast cancer patients qualify for Medicaid benefits has become a source of frustration for health care workers and a South Carolina man who has been diagnosed with the disease. 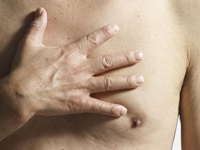 Breast cancer patient does not qualify for federal aid because of gender.

Raymond Johnson, 26, of Cross, S.C., learned about his breast cancer in July. Shortly after his diagnosis, he applied for insurance coverage through the Breast and Cervical Cancer Prevention Act of 2000. His request for coverage was denied, mostly because he is male.

Under the act, a patient must be under age 54, screened for breast cancer through a national early detection program, and uninsured and not eligible for Medicaid. The patient must also be female.

"There is a tremendous amount of interest in this story because I think people realize how ridiculous it is that someone would take such an overly rigid interpretation of the rule," says Jeff Stensland, communications director for the South Carolina Department of Health and Human Services.

In search of help

Johnson, a single, childless construction worker, does not have medical insurance through his employer, Stensland says. The state of South Carolina has tried to find ways to cover his care and several organizations have joined the cause.

One of those is Roper St. Francis Healthcare, a nonprofit hospital where Johnson is currently receiving chemotherapy.

"We are pleased this story is raising awareness about male breast cancer risks and the burden of affordable care for the uninsured," says Scott Broome, director of oncology services at RSFH.

The hospital has been coordinating care with the Charleston Cancer Center, where Johnson first went for treatment.

"While it may be appropriate to limit routine breast cancer screening programs to women, men who are diagnosed with breast cancer should have the same access to treatment as women do," says Park, who works in ACLU's Women's Rights Project. "This practice may well violate the federal Affordable Care Act, which outlawed, for the first time, discrimination based on gender in health care."

Stensland says several state legislators have heard about Johnson's plight, and the state's Department of Health and Human Services recently took a bold step regarding Johnson's care. The department's director, Tony Keck, said the state will deem Johnson eligible for the Breast and Cervical Cancer Program and submit claims to the federal government for reimbursement for Johnson's treatment.

"If federal lawyers choose to deny those claims based on a discriminatory policy, that is their choice and our department will appeal the decision," Keck said in a statement.

For now, Johnson, who first went public about his story this month, has had to scale back his activity because of the chemo treatments. "He is physically exhausted," says Susan Appelbaum, a nurse with the Charleston Cancer Center.

Also of interest: 4 ways to reduce your breast cancer risk. >>