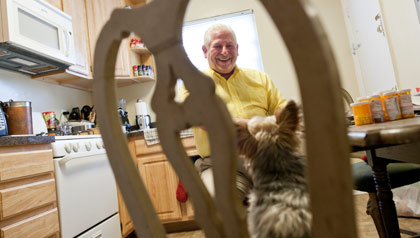 Richard Hersh, of Collingswood, relies on New Jersey’s PAAD program to help pay for his seven daily medications. The federal health reform law will allow the state to avoid cuts in the program’s service.

Richard Hersh takes seven prescription drugs a day for his chronic pain and other ailments stemming from a 1994 automobile accident that left him unable to work. His costliest drug retails for $1,300 a month; Hersh pays $7.

See also: Paying less for drugs in the 'doughnut hole.'

That's because Hersh, 67, of Collingswood — whose sole income is Social Security — is enrolled in one of two state programs that help roughly 163,000 low-income people in New Jersey pay for prescription drugs.

Although funding for similar programs in other states is in jeopardy, New Jersey's Pharmaceutical Assistance to the Aged and Disabled (PAAD) and the related Senior Gold program will see no cuts in coverage in the fiscal year that begins July 1.

The reason: the federal health care reform law that gradually closes a prescription drug coverage gap (PDF) known as the "doughnut hole" in most Medicare Part D plans. As of January, people in that gap get a 50 percent discount on covered brand-name drugs.

Because the PAAD and Senior Gold programs act as "wraparounds" to federal Medicare Part D plans — meaning they pay for much of the prescription drug costs not covered by Medicare — New Jersey won't have to spend as much.

"My medications each month cost me about $34, total," Hersh said. "If the PAAD program were not in existence, I couldn't afford the drugs at all, unless I stopped eating.

"For someone like me, the PAAD program is not a luxury. It's a necessity."

The Senior Gold program allows participants to have slightly higher incomes ­ — up to $34,432 for individuals and $39,956 for those who are married — and requires them to pay a $15 copay plus half of the remaining prescription cost.

Roughly 140,000 are enrolled in PAAD, and nearly 23,000 in Senior Gold, according to the state Department of Health and Senior Services.

Last year, Gov. Chris Christie, R, proposed that beneficiaries of PAAD and Senior Gold pay a $310 deductible. He also proposed that the PAAD copay for brand-name prescription drugs more than double to $15. Both proposals were opposed by AARP New Jersey.

The copay for generic drugs was to decrease from $6 to $5.

Christie eventually rescinded most of his plan (although the lower copays for generics were adopted), but Douglas Johnston, AARP New Jersey senior manager for advocacy, said there were concerns Christie would resurrect the proposal for the coming fiscal year. He didn't.

"We were very thankful for that. In other states, they're cutting back on those programs," Johnston said. "The PAAD and Senior Gold are absolutely lifesaving programs."

For the current fiscal year, New Jersey budgeted $177 million for both programs, said Marilyn Riley, a Department of Health and Senior Services spokeswoman. The governor proposes spending about $106 million for them in the coming year, but Riley said the reduction won't hurt the programs.

Holding the line on costs is welcome news for PAAD participant Marian E. Cowart, 56, who takes 17 medications for cardiac issues, diabetes and other health concerns. The Egg Harbor Township resident and her husband, also enrolled in PAAD, live on Social Security disability, and bills leave them with little extra cash by the end of the month.

"It's not easy," the former nurse said of her situation, "but if I didn't have PAAD, I wouldn't be here."

Greg Saitz is a freelance writer based in Madison, N.J.