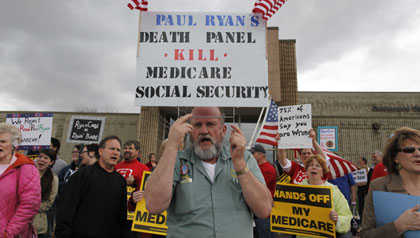 The future of Medicare has again become a political hot potato in light of a Republican plan to dismantle the government-run program and replace it with a voucher system that experts say would shift more costs to beneficiaries. The proposal is the most controversial item on the agenda as White House and congressional leaders met Thursday to start hammering out a compromise plan for reducing the national deficit.

Under the plan, drawn up by House Budget Committee Chairman Paul Ryan (R-Wis.) and adopted by the House in mid-April, future Medicare enrollees now younger than 55 would no longer receive guaranteed benefits. Instead, the government would provide a set amount of money to buy private insurance on their own.

The plan contains few details of how private vouchers would work — except that the payments would be geared to the rate of inflation as measured by the consumer price index, which is rising far slower than health care costs.

An analysis of the Ryan plan by the politically neutral Congressional Budget Office estimates that by 2030, typical 65-year-olds would pay 68 percent of the cost of their coverage out of pocket, compared with the 25 percent share they pay now. In dollar terms, the average 65-year-old's costs would more than double from about $6,000 a year under current law to $12,500 by 2022, and would be higher for older people.

In scenes reminiscent of reaction to the Democrats' health care reform proposals in 2009, angry older Americans confronted their members of Congress at recent town hall meetings — only this time it was Republicans who faced the firestorm. As a result, some Republicans in Congress seem to be distancing themselves from the plan. But Eric Cantor, House Republican leader, told Reuters that he will still press for the Ryan proposal in the budget negotiations.

Two out of three older people say they prefer to keep Medicare as it is now, according to several recent opinion polls — even though Ryan has made it clear that his proposal, if implemented, would not affect them. "Today's beneficiaries care deeply that Medicare will continue to provide adequate benefits for their children and grandchildren," says John Rother, AARP's director of policy.

Another motivation for current seniors' opposition may be that they don't trust the government to stick with the promised age cutoff. "I think there's a nervousness among seniors that if Congress ends Medicare as they know it for younger people, they could also decide to do away with it for everybody else," says Robert Blendon, professor of health policy and political analysis at Harvard University. "At a time of great economic insecurity among retirees, something that could dramatically change the program even for others sounds very threatening."

Next: The Ryan bill and Medicaid. >>

House approval came on a straight party vote with no Democrats and all but four Republicans voting in favor.

The bill also cuts billions of federal dollars from the Medicaid program, which not only provides health care for the poor but pays for most Americans' nursing home care. And it largely repeals President Obama's signature health care law. That may include eliminating certain popular aspects of the law, such as prohibiting insurance companies from denying coverage to people with preexisting medical conditions, allowing young adults to stay on their parents' health policies until age 26, helping small businesses to cover employees, and gradually closing the "doughnut hole" in Medicare's prescription drug benefit.

Republicans say the changes are necessary to reduce the national debt, which will soon hit the legal ceiling of $14.3 trillion: "Unless something is done, the red ink is going to destroy our economy," Ryan told the House. Democrats and consumer groups counter that the bill lowers taxes for the wealthy at the expense of services for the old, poor and sick.

Although the bill is unlikely to progress in the Senate, it may have already changed a key political dynamic. In the 2010 elections, Republicans won the greater share of older Americans' votes, in part by arguing that the health care reform law would harm Medicare by cutting $500 billion from the program over time. Now, in the run-up to 2012, their plan to dramatically change Medicare provides a major issue for Democrats to attack. "This will be a very difficult issue for Republican leaders," says Blendon. "They may need to rethink [their policy] if there isn't a change of attitude among seniors."

As a group of House and Senate leaders of both parties, led by Vice President Joe Biden, began budget talks May 5, AARP launched a campaign to protect Medicare and Social Security from harmful cuts. "AARP recognizes the importance of confronting out nation's fiscal challenges," said CEO A. Barry Rand in a statement. "But as leaders begin to hammer out solutions … we remind them that at stake are the health and financial security of real people — not just figures on a federal balance sheet."