En español l For years, Marcia Andrews visited the same internist in Washington, D.C. Then she turned 65, got her Medicare card and had to find a new doctor: Her internist was not accepting Medicare patients. Primary care doctors are in such demand now that they can choose not to accept Medicare, whose reimbursements to physicians are lower than private insurance rates. 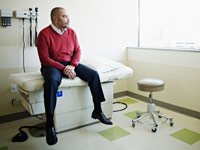 More and more people, especially Medicare patients, are having trouble finding a doctor.

"The doctor shortage is worse than most people think," says Steven Berk, M.D., dean of the School of Medicine at Texas Tech University. "The population is getting older, so there's a greater need for primary care physicians. At the same time, physicians are getting older, too, and they're retiring earlier," Berk says. And graying doctors — nearly half the nation's 830,000 physicians are over age 50 — are seeing fewer patients than they did four years ago, a 2012 Physicians Foundation survey reported.

Soon, this fraying primary care network will face another huge challenge: Under the Affordable Care Act, millions of formerly uninsured men and women will have access to health care.

"We need to absorb these 30 million people, and that's going to be a strain," says Russell Phillips, M.D., director of Harvard Medical School's new Center for Primary Care.

The approach most favored by experts at Harvard and elsewhere is to reshape traditional primary care: from a stream of patients waiting to see one harried doctor to a more efficient team practice in which patients with routine problems are seen by nurse-practitioners and physician assistants — trained specialists with master's degrees. The team frees the doctor to spend more time with patients with more serious complaints.This change could be as fundamental as the one that took place when most family doctors stopped making Marcus Welby-like house calls.

The Affordable Care Act encourages such a sea change, with provisions that aim to shore up and expand the country's ailing primary care system while still reducing costs.

The ACA authorizes money to increase the primary care workforce by training more doctors, nurses, nurse-practitioners and physician assistants. It includes more graduate medical education training positions, with priorities for primary care and general surgery, and more money for scholarships and loans for all health professionals. The law expands the number of patients seen at community health centers in areas with too few doctors and increases the number of staffers who work in the centers. It also expands nurse-managed clinics at nursing schools where nurses in training see patients who live in the area.

Another key provision: a 10 percent bonus, through 2015, to primary care doctors who offer services to Medicare patients.

But in these times of shrinking federal budgets, it's unclear how much ACA primary care money will be available as Congress juggles competing priorities. Congress, for example, already has chopped about $6.25 billion from the ACA's new $15 billion Prevention and Public Health Fund, which pays for programs to reduce obesity, stop smoking and otherwise promote good health. In addition, federal support for training all types of physicians, including primary care doctors, is targeted for cuts by President Obama and Congress, Republicans and Democrats, says Christiane Mitchell, director of federal affairs for the Association of American Medical Colleges, who calls the proposed cuts "catastrophic."

A recent study by the Institute of Medicine and the National Research Council reports that, when compared with citizens of 16 other high-income democracies, including those of Western Europe, Japan and Canada, Americans not only die younger but have poorer overall health. The researchers traced U.S. health disadvantages to a number of causes, including the fact that Americans have "more limited access to primary care."

Where have all the doctors gone?

Today, the United States is short about 16,000 primary care doctors — the very doctors (family practitioners, internists and pediatricians) who offer the treatments and preventive screenings that save lives and head off expensive emergency room visits and hospitalizations.

Why the shortage? It starts with huge medical school debts and ends with a doctor who is often overworked and underpaid. While students may enter medical school wanting to practice primary care medicine, they graduate saddled with heavy debt — $250,000 is not unusual — which prompts them to switch to a more lucrative specialty. The starting salary for a primary care physician is $150,000 to $170,000; a radiologist or gastroenterologist can make two to three times that.

Only one in five graduating internal medicine residents plans to go into primary care medicine, the Journal of the American Medical Association reports.

To make primary care a more attractive choice, medical experts are exploring a number of fresh ideas — from the more efficient team approach to shortening medical school training from four years to three. Today, Harvard is educating primary care doctors away from the doctor-sees-all-patients practice to a medical team model, which can lighten the doctor's workload and paperwork and still offer excellent care.

In Texas — where many small towns have only one doctor, if that — Texas Tech University is about to graduate its first class in an accelerated, three-year family medical program. Highly qualified students shave a year off med school and receive a full scholarship for their first year.

The best place to start is your state medical association. Many provide doctor directories that often include new doctors just setting up practice.

If you're a Medicare beneficiary, go to medicare.gov. Under "Forms, Help and Resources" on the home page, select "Find doctors, hospitals and facilities." Type in your ZIP code and you'll get a drop-down menu of medical specialties, including primary care. The tool provides contact information for doctors according to the criteria you enter — geographic location, specialty, etc. Call the office to check whether the doctor is still taking new patients.

Clay Buchanan, a former lawyer, is one of those graduating in May. At 48, the Little Rock, Ark., resident is older than most medical students. He shadowed a family doctor as part of his training — and was hooked. "By noon the first day, I loved it," Buchanan says.

New York University and several other colleges are planning to experiment with a three-year program.

Community health centers offer another form of primary care. Nationwide, the centers serve 20 million patients a year using a team approach, and are open to all on a sliding fee scale. Under the ACA, they are expected to double their capacity to 40 million patients by 2015. To entice doctors to work at these centers, the National Health Service Corps repays up to $120,000 in loans for each doctor in return for four years' service.

Technology, including telemedicine — which could reduce patient trips to the doctor's office — also should help expand health care.

Another way to increase health services is to give "physician extenders" — nurses and other medical professionals — more autonomy. Patricia Grady, director of the National Institute of Nursing Research at the National Institutes of Health, supports increasing the role of trained nurses, allowing them to set up independent practices where they could do physical exams and advise patients on exercise and diet.

But that position has met with some resistance. The American Academy of Family Physicians and the American Medical Association (AMA) favor training more physicians and nurses but want to keep nurses in teams led by doctors.

Permitting more foreign doctors to practice here also would increase the pool of primary care providers. Last fall, President Obama signed a three-year extension of a visa waiver program that allows states to place 30 foreign medical school graduates a year in "medically underserved" areas for three years. Most remain in the communities after they satisfy their commitment. Still, the shortage is so acute, even the AMA is lobbying Congress to increase to 50 the number of foreign-educated doctors each state is allowed.

In the meantime, more Americans are anxiously searching for a primary care doctor — or waiting months to see one. Marcia Andrews, whose Washington doctor refused to take Medicare, finally found a new doctor who does. The search took her 18 months.

Marsha Mercer is a freelance journalist who lives in the Washington, D.C., area.