People who spend time tending their gardens are likely to be more optimistic, physically active and healthy — compared with those who don't garden.

"There's always something to look forward to when you have a garden," says Aime Sommerfeld, of the Department of Horticultural Sciences at Texas A&M University, lead author of a report published in HortTechnology, a journal of the American Society for Horticultural Science. "Our study found that reconnecting with nature, watching things grow, working with soil in your hands have a positive impact on your quality of life." 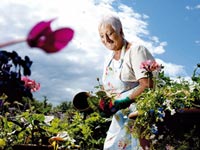 Gardeners are more likely to be healthy than people who don't garden.

The study's team of researchers analyzed the responses of 298 men and women over the age of 50 who were asked about their activities and satisfaction with life, and compared the answers of those who gardened with those who didn't.

About 84 percent of the gardeners — whether they dabbled with container plants or spent hours nurturing flowers and vegetables — reported that they made plans for the future, compared with 68 percent of the non-gardeners.

Of the gardeners, 96 percent did not find their daily activities boring or monotonous; 71 percent felt energetic; and 74 percent said they'd reached many of their lifetime goals.

The non-gardeners were more likely to find life dull and less likely to feel energetic or satisfied with their goals. More than twice as many of the gardeners considered themselves to be very active. What's more, they rated their health as very good or even excellent. The researchers were from Texas State University, San Marcos, as well as Texas A&M.

"These findings are important because they show that people can be happier and healthier simply by planting a pot of pansies or growing some tomato plants in a sunny spot," says J. David Williams, head of the Department of Horticulture at Auburn University. "The older population especially should be encouraged to get out there and become involved with the natural world."