The latest nutrition guidelines announced yesterday by the federal government don't mince words when it comes to the way older adults should be eating: less salt, fat and sugar. More fruits, vegetables and grains. 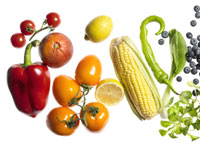 In particular, if you're 51 and older, you need to sharply cut your salt consumption to no more than 1,500 mg of salt daily. The same goes for all African Americans, as well as anyone with high blood pressure, diabetes or kidney disease, according to the new nutrition recommendations.

Older adults also should make sure they get enough vitamin B12 through fortified cereals or vitamin supplements. Vitamin B12 deficiency — which can cause weakness, confusion, depression and fatigue — occurs more often in adults over 65, as well as in people who chronically take stomach acid-reducers like Prilosec and Zantac, which can affect the body's absorption of the vitamin. Foods high in B12 include fish, shellfish, meat (especially liver), dairy products and fortified breakfast cereals.

The nation's dietary guidelines are required by law to be updated every five years. They influence the health advice that people get as well as the nutritional information included on food labels. This year's version was refreshingly clear and straightforward, says Marion Nestle, a nutrition professor at New York University and a frequent critic of government nutrition advice.

"To my great surprise, I like a lot of what's in these guidelines. I like the clarity," Nestle wrote in an e-mail.

She praises the new guidelines for recognizing that "obesity is the number one public health nutrition problem in America. For the first time, the guidelines make it clear that eating less is a priority."

The departments of Agriculture and Health and Human Services jointly issued the new federal dietary recommendations, focusing on America's growing obesity epidemic and its resulting health problems. More than two-thirds of adults and more than one-third of children in the United States are overweight or obese, the guidelines noted.

Reducing salt consumption was the number one recommendation. No one should consume more than 2,300 mg (about one teaspoon) of salt daily, but older adults, African Americans and those with certain health problems — roughly half the U.S. population — need to cut back even more, to 1,500 mg.

Although this was lauded by at least one medical expert, the American Heart Association issued a statement calling the advice "weak" and saying it was no different from the government's 2005 guidelines. The heart association recommends less than 1,500 mg of salt a day for all Americans.

However, Jane E. Henney, M.D., of the University of Cincinnati and head of a 2010 Institute of Medicine report on U.S. sodium consumption believes anything that lowers Americans' salt consumption "will be helpful in reducing the health consequences, such as the development of hypertension, that is linked to excess sodium intake."

The guidelines were prepared by a committee of nutrition experts who reviewed scientific literature on diet, exercise and nutrition, as well as input from public comments and testimony at a series of public meetings.

Candy Sagon writes about food and nutrition for the Bulletin.