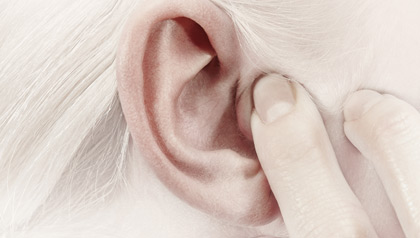 Having difficulty hearing? You may be at higher risk of getting dementia.

En español | Adults with hearing loss are significantly more likely than adults with normal hearing to develop dementia, according to a new study out today from researchers at Johns Hopkins and the National Institute on Aging. The study – which finds that the greater the hearing loss, the higher the risk – may open a new avenue of research into dementia and Alzheimer's disease.

Men and women in the study who experienced severe hearing loss were five times more likely to develop dementia than those with normal hearing. But even mild hearing loss doubled the risk of dementia.

The study followed 639 people ages 36 to 90 who initially did not have dementia – the insidious loss of memory, logic and language that interferes with daily living. The volunteers were tested for hearing loss and dementia every two years for nearly two decades.

Researchers found that those with hearing loss at the beginning of the study were much more likely to develop dementia by the end, even after taking into account age and other risk factors. The risk of dementia only began to rise once hearing loss began to interfere with the ability to communicate – for example, in a noisy restaurant. The study also found that hearing loss increased the risk of Alzheimer's disease, but the two were not as strongly linked as hearing loss and dementia. The study was published in the medical journal Archives of Neurology.

Frank Lin, M.D., assistant professor in the Division of Otology at Johns Hopkins University School of Medicine and an author of the study, says this is the first large study to connect hearing loss to the development of dementia and should spur more research into this intriguing new relationship.

Lin says it may be that whatever causes dementia also causes hearing loss, but there's no clear evidence. He thinks it's more likely that the neurological stress of dealing with hearing loss contributes to dementia and Alzheimer's disease.

"If you are out to dinner with friends at a busy restaurant and it's very, very loud, by the time you get home you're exhausted, because you spend so much time trying to think about the words people are saying, to decipher everything," he says.

Then, too, it may be that the social isolation that comes with hearing loss contributes to the development of dementia.

Next page: Will hearing aids help? »

People who have a hard time hearing can't follow conversations or respond to questions. They feel frustrated and embarrassed and tend to avoid socializing. And previous research has linked isolation with a higher risk of dementia.

Or, Lin says, it may be a combination of the neurological stress and social isolation.

Either way, this study may prompt men and women to pay more attention to hearing loss, a condition that affects more than 9 million Americans over the age of 65, according to the American Speech-Language-Hearing Association.

Lin says people don't tend to give hearing loss the same kind of attention they give high blood pressure or heart disease. Instead, they accept hearing loss as an inevitable part of aging. But, says Lin, it may be time to take a more serious look at the condition.

Luigi Ferrucci, M.D., chief of the Longitudinal Studies Section at the National Institutes on Aging and another of the study authors, says it's not yet time to recommend widespread action, but researchers have important questions to answer, including: If we cure hearing loss, are we going to prevent dementia? And can hearing aids make a difference?

Even if treating hearing loss only delayed dementia, that alone could have enormous consequences, researchers say.

This study didn't find that hearing aids decreased the risk of dementia, but volunteers in the study only reported whether or not they had hearing aids, not how often they used them or how effective they were.

In June, Johns Hopkins researchers will begin a study to determine whether hearing aids or cochlear implants can lower the risk of dementia. Those results, however, won't be available for several years. Meanwhile, Ferrucci says, he and his colleagues are studying brain scans of people with hearing loss to look for connections between the two.

Elizabeth Agnvall is a contributing editor at the AARP Bulletin.